A standing back layout was not part of Simone Biles’ routine during the Gold Over America tour. Dancer Trinity Bonilla did not expect to do a backflip. And the worm was certainly not planned for Laurie Hernandez.

But Sunday night – during the final show of the tour at TD Garden – the standing back layout, the backflip, and even the worm all made appearances on stage.

The 110 minute show was split into two acts and starred Simone Biles, the world’s most decorated gymnast with 25 medals overall.

The first act went smoothly – at least to the audience, who appeared captivated by the flips and twists of some of the world’s best gymnasts plus the show’s choreographed dances. After the 20 intermission allowed the gymnasts and dancers to regroup and prepare for the final act of the tour, the show was ready to resume. But then, there were reportedly technical difficulties.

According to an Instagram story posted by dancer Sierra Fujita, “the music files got corrupted and disappeared.” For a brief period, the lights dimmed and a video played across the screen, but no music played.

After a few minutes with the lights back up and the video turned off, Hernandez hit the stage. Instead of chalk, she held a mic in one hand and motioned for her teammates on stage with the other.

As she brought the rest of the team out onto the floor, the group quickly made a circle and improvised some activities for the crowd. Going around the circle, the gymnasts and dancers did basic tricks in a follow-the-leader like fashion.

The gymnasts completed splits and spins in the air before shifting to more elaborate moves like back tuck flips.

Eventually, the group created a wave of backflips as one gymnast flipped after the other. To the audience and teammates’ entertainment, the dancers did the difficult gymnastics moves to the best of their abilities.

While some dancers did fun jumps or cartwheels in place of the elaborate flips, others were able to complete the backflips or back handsprings. Fujita posted on Instagram this was the first time she landed a standing tuck in years. All attempts were met with celebrations from the performers and the crowd.

As Hernandez emceed the improvised events, the gymnasts and dancers entertained the crowd through handstand contests, dance battles without music, stick it competitions, and finally – after its multiple chanted requests – the worm.

At one point – after Hernandez already organized multiple rounds of gymnastics related stunts – dancer Maisy Dunne took over the mic from Hernandez.

In a circle, both dancers and gymnasts proceeded to do the dance move that involves spinning around multiple times on one leg.

During the handstand contest, the audience cheered on dancer Emily, who stayed up longer than many of the gymnasts and was one of the final three still upside down. One video shows a bunch of dancers playfully messing with Biles and knocking her down In the end, Chiles won, playfully face planting to the floor following her victory.

At another point, Hernandez asked her fellow teammates about what else they could do to entertain the crowd.

“Can anyone do a standing back layout?” Hernandez asked at one point.

That’s when Biles started to walk towards the center of the circle.

“Don’t be shy, just try it,” Hernandez said to Biles. The difficult move involves a person completing a backflip with legs straight in the air from standing position.

Biles – seemingly effortlessly – flew upside down through the air and landed the backflip.

On Twitter that night and the next day, users raved over Biles’ ability to execute a standing back layout on the spot with perfect form.

“Guys, this is insane.. @Simone_Biles is the #goat for a reason!” one user tweeted with the video of Biles. “Standing back layout?! Really?!”

“i just watched a video of simone biles doing a standing back layout,” another tweeted. “left me speechless she is incredible”

Throughout it all, the performers continued to laugh and smile alongside the audience. Eventually, the technical issues were resolved and the group was able to complete act 2 of the show.

“Shoutout to improv queen @LaurieHernandez for keeping the crowd entertained during ~an hour of technical difficulties lol,” another user tweeted.

The Gold Over America tour announced Monday that the show will be available to live stream on Dec. 4 at 4 p.m. ET. There were also reports that Biles will be taking a break from gymnastics following the end of the tour.

“We’re all backstage talking about how much fun that was for us,” Hernandez tweeted. “we never get to show that side of us to y’all, hope you enjoyed it as much as we did!” 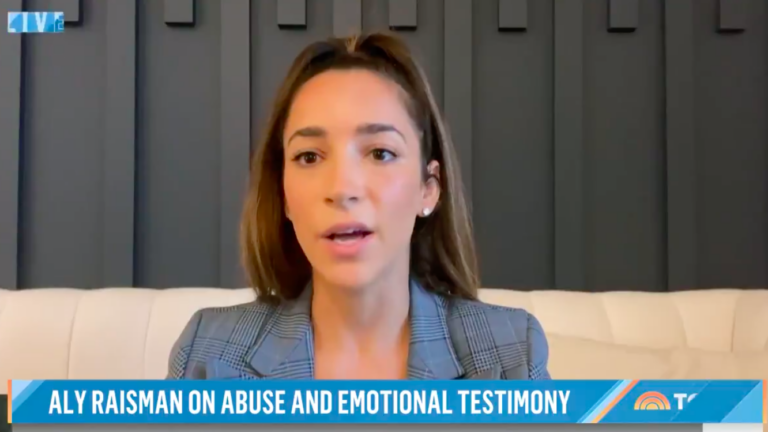