BEIJING – The last act of Mikaela Shiffrin’s Beijing Olympics was a group hug with her teammates beyond the finish line at the end of the bronze medal match of the mixed-team parallel event at the Yanqing National Alpine Skiing Centre. It wasn’t even clear if Shiffrin and her American teammates knew if they had won or lost – they lost – but there was a smile, or something close to it, on Shiffrin’s face.

On the day Shiffrin finally made it to the finish line in a technical race at these Olympics – four times, no less – it ended up not making a difference. Team USA was beaten by Norway in the bronze medal final, sealing a fate for Shiffrin that would have seemed unfathomable two weeks ago: six events, zero medals.

Top-seeded Austria took the gold medal, winning the final match in a tiebreaker over Germany.

“I am not disappointed,” said Shiffrin, 26. “I’ve had a lot of disappointing moments at these Games. Today is not one of them. Today is my favorite memory. This was the best possible way that I could imagine ending the Games, skiing with such strong teammates.”

In a newfangled, made-for-TV event that was making just its second appearance on the Olympic Alpine program, Shiffrin, a three-time Olympic medalist, went head-to-head against a counterpart from another country four times and won only one of the four – in the first round against Slovakia. However, each time Shiffrin was skiing on the red course, which was demonstrably slower than the adjacent blue course.

Shiffrin lost by two-hundredths of a second to Italy’s Marta Bissino in the quarterfinals – a match Team USA survived thanks to wins by her three teammates, Paula Moltzan, Tommy Ford and River Radamus. She lost by a tenth of a second to Germany’s Lena Duerr in the semis, with the Americans losing to fall into the bronze medal match.

And in her 10th and final run of the Beijing Olympics, Shiffrin lost by 0.52 to Norway’s Thea Louise St. Jernesund. With the teams splitting the match’s four heats, the winner was determined by adding the fastest men’s time and the fastest women’s time – which handed Norway the bronze medal by 0.42.

If it was an unsatisfying end to Shiffrin’s quest for a fourth career Olympic medal – which would have tied her with Julia Mancuso for the most by an American Alpine skier – it also gave her a small measure of revenge against a course that had tormented her over the previous two weeks.

“It’s the most special feeling, the most positive and optimistic feeling I’ve had for this whole time we’ve been here,” Shiffrin said.

In the three events where she had her best chances at an individual medal – the slalom, giant slalom and Alpine combined – she skied out each time on the course known as the “Ice River.” Her official finish each time: DNF. She added a ninth-place finish in the super-G and an 18th in the downhill, events in which she was not considered a medal favorite.

After each race, Shiffrin poured her heart out to the assembled television cameras and microphones, processing her “failures” – a word she used on multiple occasions – in real time in front of the world.

But just by simply tackling a sixth event in Beijing, Shiffrin made history, matching Slovakia’s Petra Vlhova (2018) for the most Alpine events in a single Olympics. She had raced in the mixed-team event only once before in a World Cup and never in an Olympics, acknowledging Sunday, “There’s been a lot of times in my career where I’ve had to put individual interests first in order to accomplish the goals I had.”

When high winds in the mountains northwest of Beijing on Saturday forced officials to push the race to Sunday – the day of the Beijing Games’ Closing Ceremonies – Shiffrin had a decision to make: Leave Beijing, as scheduled, on a flight at 5 a.m. Sunday to Europe, where she plans to resume competing on the World Cup circuit, or change her travel plans to stay and compete.

“There was absolutely some thought” about leaving, Shiffrin said. ” . . . I decided to stay because I wanted to compete with my teammates.”

Sunday’s conditions were barely any better, with winds gusting up to 25 mph and temperatures that dipped to minus-3 Fahrenheit. Skiers stayed bundled in their parkas until the very last second they entered the starting gates.

The lure of another Olympic medal – and perhaps the chance to extract a measure of revenge from the Ice River – brought Shiffrin back to mountain one last time Sunday. She got that measure of revenge, with four trips across the finish line, but the elusive medal remained just out of reach. 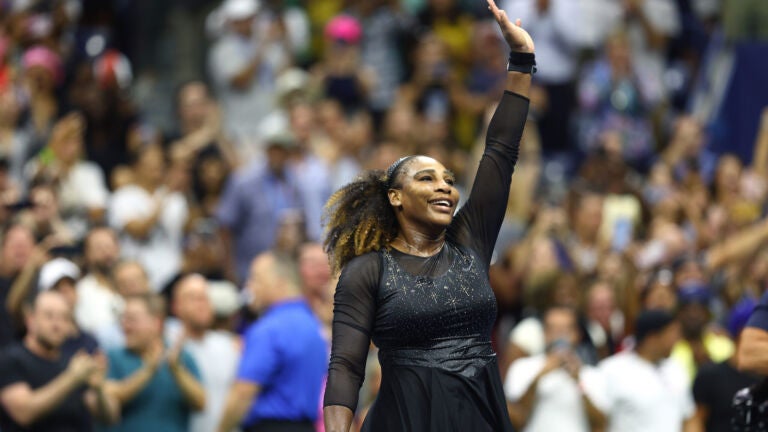 Watch: Serena Williams not ready to say goodbye just yet, advances at US Open