When Ryan Polley became the inaugural head men’s lacrosse coach at Boston University in 2012, he had a vision of building the program into a perennial contender.

He sold recruits on the notion of playing at an elite academic institution in a bustling city, knowing it might take some time to gain traction but truly believing that results would come.

BU finished 2-12 in Year 1 under Polley in 2014, earned its first winning season in 2016, played in three straight Patriot League semifinals from 2017 to 2019 and ground through two pandemic-altered, shortened seasons.

On Sunday, the No. 16 Terriers (12-4) outlasted Army West Point, 14-10, at Nickerson Field to capture their first-ever league title and book their first trip to the Division 1 NCAA Tournament.

BU is set to face fifth-seeded Princeton (9-4) on the road in the first round this Saturday, May 14, at noon. The Terriers, who rely on a blend of 11 Massachusetts-raised players plus talent from all over the country, aren’t done yet and have national title aspirations.

Regardless of how the next few weeks unfold, though, the seniors leave knowing they helped change the culture and actualize Polley’s blueprint.

“It’s really great to see that vision that we all bought into as recruits coming to fruition right now,” said senior midfielder Jett Dziama of Natick.

Long before Polley assumed his current role, he helped launch a girls’ lacrosse program from scratch at Andover High School. He learned how to enter a strong and proud sports community and create buzz and momentum around something new yet familiar.

Polley, a former All-American at Merrimack College, coached at his alma mater before spending six years as an assistant at Yale University. He took a chance coming to BU and plucked a few players from the club team as he helped launch a Division 1 program.

He knew the Terriers would take their “lumps” in Year 1, but he could also see that the plan was in motion. It wasn’t always easy to stay patient, yet he knew it would be well worth the grind.

The staff used the BU brand to its advantage, recruiting in Texas, California, Florida, and other parts of the country along with New England. They had an ongoing internal battle as they set the lofty goal of landing at least one top-five local recruit every season.

30 freshmen entered in 2013, and that class collectively helped the Terriers finish the 2017 season 12-5 and earn their first Patriot League tournament berth. BU finished 11-6 in 2019, including a stunning seven-goal victory over No. 2 Loyola, but lost a heartbreaker to Lehigh 10-9 in the semifinals. The 2020 and 2021 seasons weren’t kind, as they dealt with a slew of injuries and COVID issues at inopportune times and never quite hit their stride.

Polley remembers brainstorming in the office with his staff this past offseason about how to get to the next level. They kept finding a way to beat the eventual Patriot League champion but then losing when the stakes were magnified, and it was a trend they knew was fixable. They collectively decided consistency was the most important differentiator, and they turned to this year’s seniors to lead the way.

Dziama called it a “really tough two years” but said the Terriers “came out a lot stronger” and leaned on their past struggles as they started fresh. The seniors spearheaded summer leadership groups that ensured players completed daily workouts and drills and regularly shared their progress. They hammered home that each player was training to benefit the big picture.

“The senior class has been incredible,” Polley said. “After last year, it was really hard with COVID, just trying to figure everything out. Our culture wasn’t bad. It’s not like we had people telling each other to screw off, or ‘You’re a (jerk)’ or anything like that. It was a good culture, but it wasn’t championship.”

Dziama thought back to when he was a freshman coming on campus and how enticed he was by the idea of gunning for uncharted territory. He and his classmates felt as though their chapter of BU history wasn’t complete, so they held their teammates more accountable than ever.

As they’ve made that shift themselves, they’ve noticed more buzz on campus than before.

“It’s great to see other people realizing that BU lacrosse is really good and a force to be reckoned with,” Dziama said. “The hard work is paying off, and people are starting to notice, so that’s definitely pretty rewarding.”

Vince D’Alto (45 goals, 30 assists), Timmy Ley (43 goals, 31 assists), and Louis Perfetto (30 goals, 35 assists) have led the way offensively, and Roy Meyer has been a catalyst defensively with 54 caused turnovers and 75 ground balls. The Terriers’ diligence showed right away as they ripped off six straight wins to start the season, gave every Ivy League team they faced a close game and earned a key win over Loyola Maryland.

Even after a stellar regular season, though, they still had to finish the task in the league tournament. The Terriers, who have now beaten everyone in the Patriot League this season, outlasted Lehigh 13-12 — flipping that deflating 2019 result in their favor — then prevailed against Army to seal it.

Polley said it was extremely gratifying to see about 50 varsity alumni, plus about 20 club alumni, in the stands celebrating with the current crop of players. It was a full-circle moment as they knew the triumph was about more than just this team’s success.

“When I took over the program I had a vision, but you never know how it’s going to go,” Polley said. “To see it come to fruition, and see everyone so invested and so happy, it just makes me really happy.” 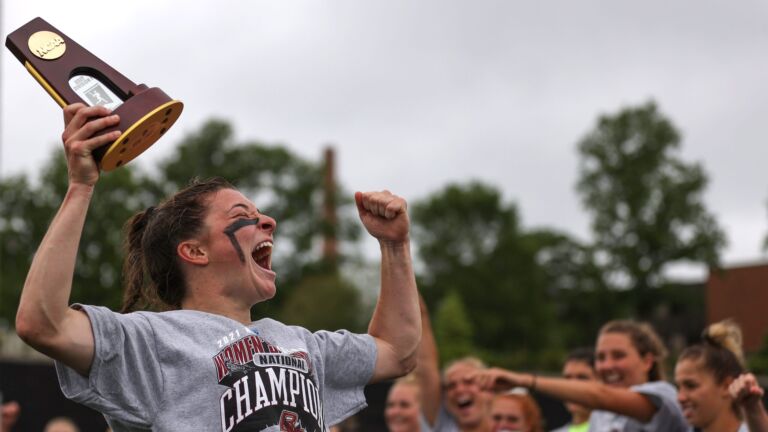