The 122nd US Open Golf Tournament is coming to The Country Club in Brookline this week.

Presented by the United States Golf Association (USGA), the tournament is one of four major PGA championships.

Whether you’re attending the golf tournament between June 16 and June 19 or simply viewing it from home, here are 10 things to know about the US Open, from the significance of its four-day duration to where you can still find tickets, and most importantly, why it’s such a mega deal that the tournament returns to The Country Club in Brookline.

We’re not talking about tennis.

It shares the same name as the September tennis tournament, but there are no rackets involved here. The first US Open golf tournament was hosted in 1895 by Newport Country Club (the 9-hole course, 36-hole championship over one day was a far cry from the 72-hole play in 2022). It is now one of four men’s major golf championships played, with the other three being The Masters, Britain’s The Open Championship, and the PGA Championship. It can get confusing for amateurs when it comes to golf versus tennis Opens, but sports fans make no mistakes when it comes to this June event.

The length of the tournament is a result of the 72-hole stroke play, allowing the golfers to play four 18-hole rounds over the four-day period (with a cut after 36 holes). The championship tees off with the first round on Thursday, June 16, at 2 p.m., with the second, third and final rounds played consecutively through the weekend.

Albeit expensive, if you somehow missed that this acclaimed event is coming to your backyard and are trying to find a way to attend, don’t fret — tickets are still available. Whether you opt for a weekly badge or a one-day pass, you can see what’s available on TicketSmarter.

This isn’t the first time it’s been held in Brookline.

The Country Club in Brookline hosted the U.S. Open for the first time in 1913, then again in 1963 and 1988. This year, the course was transformed from its previous years. According to Golf Digest, the routing used for the 2022 US Open features “a new sequencing of holes than the order played in the 1963 and 1988” tournaments. “It also includes a hole not utilized in a major since 1913,” reports Golf Digest.

This is a historic course.

Though The Country Club presents some novelty this year, the course is indisputably historic — established in 1883 as the first country club in the United States. In relation to the US Open, it is one of the courses that helped bring golf to mainstream America after a no-name caddie won the 1913 U.S. Open hosted at The Country Club. Francis Ouimet is now a household name for transforming the sport stateside, and the venue still pays homage to the 20-year-old amateur who beat out professional golfers Harry Vardon and Ted Ray. Oh, and it’s ranked 17th on Golf Digest’s list of America’s 100 Greatest Courses.

Here’s who is favored

There are usually 156 registered players in the US Open but the names to know are: Scottie Scheffler, ranked as the number one golfer in the world and just won the Masters in April; Jon Rahm, who won the US Open last year at Torrey Pines; Rory McIlroy, who has been playing expertly and is trending for a long-overdue win; Justin Thomas, who just won the PGA championship; and Collin Morikawa, who took home the 2021 Open Championship title on his debut. Much to fans’ disappointment, Tiger Woods is not playing due to ongoing leg pain.

There’s an official cocktail this year.

For the first time in 122 years, there’s an official cocktail for the US Open, courtesy of Dewar’s Whisky. The Lemon Wedge is a contemporary twist on the classic highball, featuring 1.5 ounces of Dewar’s 12-year-old whisky, 3 ounces club soda, and 2 ounces freshly squeezed lemonade, garnished with a lemon wedge (of course). It will be served at The Country Club throughout the tournament but is also available as a cocktail kit for at-home viewers.

Here’s what to wear, or not to wear.

While there isn’t an official dress code for the US Open, The Country Club is a formal establishment that requires certain attire throughout its different venues. While it may not be enforced during the US Open, if you want to adhere to the club lifestyle, a few important regulations include jackets for men in the southern wing of the Clubhouse, casual sports attire such as “golf shirts, slacks or Bermuda-length shorts and skirts of similar length for women,” according to The Country Club guest information page. Finally, hats and caps should be removed while dining inside throughout the Clubhouse.

It’s not all fun and games, there’s a cause.

As part of the United States Golf Association, The USGA Foundation is a 501(c) nonprofit organization, member engagement, and fundraising program that was launched in 2017. With a mission of “Driving the Game Forward” through their four main pillars — enhancing the on-course experience for all players, creating a healthier relationship between courses and the environment, celebrating traditions, and preparing future leaders — the foundation receives a portion of USGA Membership dues to fulfill their duties to the next generation of golfers.

This week the controversial, Saudi-backed LIV Golf Invitational Series debuts in London. The league, comprised of 48 players including American golfers Dustin Johnson and Phil Mickelson, is under scrutiny for not only dividing the golf world with some of the best names in golf attending the tour, but also for the alleged human rights violations behind the sponsored dollars. The PGA has suspended players who are playing in LIV, barring them from playing in both leagues. However, on Wednesday the US Open, which is run by the USGA and not the PGA, announced golfers who play on the LIV Golf Tour can play in Brookline. It’s an un-ignorable topic in the golf world right now, and will certainly live on the sidelines during next week’s championship. 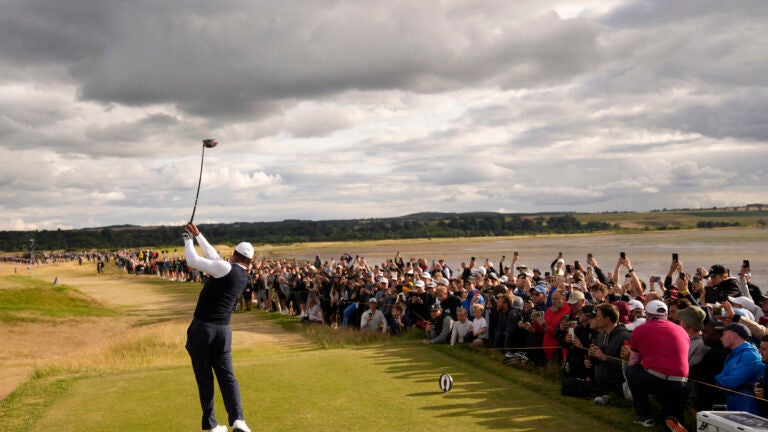