The third-seeded Connecticut Sun, fresh off a Game 5 triumph over the defending champion Chicago Sky, will face the top-seeded Las Vegas Aces in the WNBA Finals.

Both teams are seeking their first championship. Here are five things to know as the series gets underway:

The series follows a 2-2-1 format, and the potential five games are spaced out over 10 days.

Fans hoping to catch the action in person can make the drive to Uncasville, Connecticut, this Thursday or on Sunday, Sept. 18. Just be prepared to stay up late Thursday.

It hasn’t been an easy road.

The Sun have had to grind every step to get to the Finals. First, they needed the full three games to outlast a young and scrappy Dallas Wings team that featured Newton’s Veronica Burton.

In the semifinals, they fell behind the Sky, two games to one, and were on the brink of elimination.

Connecticut’s 18-0 flurry was the longest run any WNBA team has pieced together to finish a playoff game.

The Sky eliminated the Sun in 2021 en route to the title last year, so it was a particularly gratifying victory for Connecticut’s players and coaches.

Many viewed Chicago as a likely candidate to become the first team to repeat since the Los Angeles Sparks in 2001-02. With Candace Parker, Kahleah Copper, Emma Meesseman, Courtney Vandersloot, and Allie Quigley on the roster, the Sky are one of the league’s most potent teams.

The Sun, as they have all season, relied on their depth and defense to find a way.

“When adversity hits, sometimes we fold,” Sun guard Natisha Hiedeman told reporters. “Not no more, we’re not folding no more. As you all saw (after) the third quarter, we picked up right back up once again. Now we’re going to the championship. Job not done yet.”

The Sun don’t rely on one or two players to carry the load offensively.

The Sun also excel defensively. They allowed the second-fewest points per game (77.8) and forced the most turnovers (16.4) in the regular season.

No team has reached 90 against them in the playoffs.

They’re up against a formidable opponent.

The No. 1 Aces feature one of the game’s most dynamic players in A’ja Wilson, who recently earned Most Valuable Player honors for the second time in three years.

“It doesn’t even sound real,” she told reporters. “It’s something you don’t really even dream of.”

Chelsea Gray (24 points per game), Kelsey Plum (18.8), and Jackie Young (12.3) are also catalysts for the Aces, who cruised past the Phoenix Mercury in two games and outlasted the savvy Seattle Storm in four. All four games were either decided by five points or fewer or went to overtime.

The Sun are in for a steep challenge as they try to give New England another championship. The Aces are favored, but don’t tell that to the Sun.

“Don’t count us out just yet,” Bonner told reporters,” cause we are relentless.” 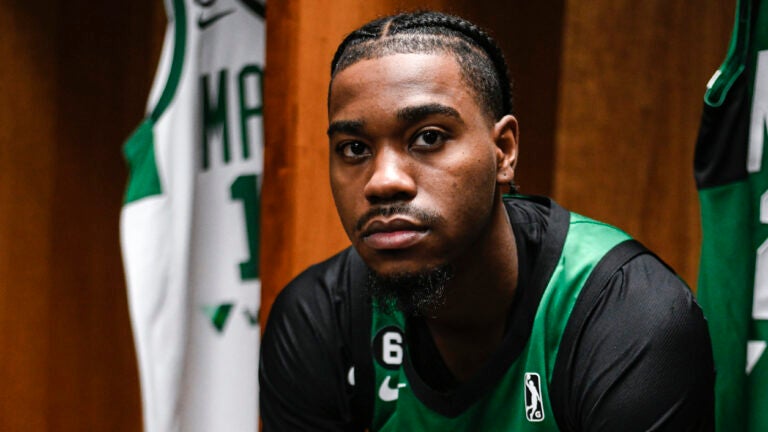 After signing with the Celtics, Roxbury's AJ Reeves aims to prove he's here to stay