In 2004, shortly before the Red Sox began their magical comeback that culminated in their first World Series in 86 years, David Ortiz was planning his vacation.

Ortiz, who spoke Wednesday at The Sports Museum’s annual event “The Tradition,” told moderators he thought the season was over going into Game 4.

Fortunately for the Red Sox, they had Kevin Millar.

“He was screaming all the way across the field down from first base, ‘This s—- is going down tonight,’” Ortiz said, to laughter from the crowd.

Ortiz said Millar started screaming and talking trash, yelling at his teammates and even the Yankees: “Don’t let us win one.”

“I was like, ‘What is wrong with him?’” Ortiz said. “‘They let us win one, we whooping their ass.’ Like okay, whatever, but he was screaming. In the clubhouse, same thing. He was the real motivation.”

Ortiz’s appearance was a highlight of The Tradition — fans started crowding around the media scrum before he spoke, and in a star-studded event that included Kevin McHale, Mike Milbury, Ben Coates, Taylor Twellman and Angela Ruggiero, Ortiz was (of course) a favorite.

“Boston is everything to me, man,” Ortiz told reporters. “… Boston built me. Boston is the place I always love to come. People every time treat me with a smile. It never gets old.”

Ortiz might earn another honor next month: On Jan. 25, voting results for the baseball Hall of Fame will be revealed. Ortiz is a first-timer on the ticket.

Ortiz marveled over his progression — from playing baseball for fun as a child to being mentioned with the greatest players of all time.

“There’s things in life you have no control over,” Ortiz said. “The only thing I have control over was the baseball bat when my turn shows up, you know what I’m saying? I think I did okay, and hopefully at some point it happens.”

Still, he added: “That doesn’t take my sleep away, to be honest with you.”

As Ortiz’s time on stage wrapped up, host Tom Caron had a final question.

“Do you really like A-Rod?” Caron asked, in a tone that suggested there is a correct answer.

Ortiz and the crowd roared with laughter.

“Look, he’s a good guy, man,” Ortiz said, and the crowd groaned with some scattered (presumably good-natured) boos. “I’m telling you. The thing is, he’s got his own personality. In my case, I love you the way you are. I don’t want you to be the way I want you to be. …

Here are some more takeaways from the event.

– After years of playing basketball with Danny Ainge, followed by years of running in the same circles as NBA executives, Kevin McHale offered his assessment of his long-time friend.

Ass or not, McHale chose Ainge to be his presenter at The Tradition, and the two made a funny pairing onstage discussing the 1986 Celtics (and whether the ’85 or ’87 teams were better). Ainge talked about imploring McHale to hit somebody hard one time right before McHale’s famous take down of Kurt Rambis in 1984.

“The only regret I had [was that] it wasn’t a better player,” McHale said. “I mean Rambis? Worthy, or Magic, Kareem or somebody. It just happened to be Rambis.”

– McHale said he visited tiny Hellenic College in Brookline, where the Celtics used to practice — a far cry from the gleaming Auerbach Center that towers over the Pike.

“I never went to a game playing against the Sixers and go, ‘We’d be a lot better if our practice facility was better,'” McHale said. “I was trying to kick their ass. I didn’t care where we practiced.”

A better practice facility, of course, might have helped keep McHale healthy a little longer. Still, he and Ainge were happy to banter about injuries that doomed his career to reporters when one asked McHale about spending his whole career with the Celtics.

“Yeah, that was a mistake,” Ainge quipped. “Red should have traded him when he broke his foot.”

– Ainge doesn’t miss the job of being Celtics president of basketball operations.

Ainge said he spoke to new Celtics president of basketball operations Brad Stevens often during the summer. The two speak less frequently now, but Ainge remains connected to his son — Celtics director of player personnel his son Austin Ainge — as well as assistant GM Mike Zarren. He has watched every Celtics game, and he enjoys watching it “most nights.”

“I think I said this a handful of times last year — it’s just about putting 48 minutes together,” Ainge said. “They just have these great quarters, great halves and haven’t been able to put as many great 48-minute games together and string them together yet. But I do see a lot of potential with the team.”

– Angela Ruggiero — an Olympic gold medalist and a member of the Hockey Hall of Fame — said she first picked up hockey at age 7 because nobody wanted to play hockey in California in the ’80s.

Ruggiero’s father — a native of New Haven — wanted her younger brother to play, and the team was desperate for players. The coach offered her father a family discount if he brought his two daughters to join the team.

Ruggiero described the harrowing process of letting go of the boards her first time on the ice. When she finally did and she started gliding, an Olympic hockey career was born.

“I fell into it,” Ruggiero said on Wednesday. “It was crazy, it found me.”

Ruggiero quickly became one of the best players in the country — she played for the national team at age 15 (and brought hockey cards for all her teammates to sign) and won a national championship at Harvard in 1999. A year prior, she and Team USA claimed gold at the 1998 Olympics — a monumental moment for the sport.

“I’m a huge advocate for women,” Ruggiero said. “We need more women to be visible, we need to invest in women’s sports, we need to do more to support not just on the field but off the field because sports is a platform for change.”

“It always has been kind of in the heartbeat of the city, but now it’s really part of it,” he said. “I think that culminates with me being inducted.”

During the presentation, Twellman said he attended The Tradition many times and always had a chip on his shoulder at the lack of soccer representation, “not for me but for the Revolution and the sport and the Kraft family to be recognized in this market.”

Twellman praised this year’s Revolution team, which was the best team in MLS before a shocking loss in the playoffs. He can relate: Twellman believes his Revolution teams should have won “at least” two titles from 2005-07.

– Twellman is very confident the Kraft family will deliver something soccer-related to the city, however: World Cup games in 2026.

“Honestly, I’d be shocked if they don’t get a game,” Twellman told Boston.com.

The Kraft family recently hosted a FIFA delegation to learn what would have to happen at Gillette Stadium to host a game. Twellman said the Krafts have been on record offering to switch out the turf for real grass.

– Ben Coates’s time as a Patriots tight end predated the Tom Brady dynasty, but he was a star in his own right: A five-time Pro Bowler who amassed 5,555 yards and 50 touchdowns for his career.

Coates was so reliable, he and Drew Bledsoe coined a creative nickname.

“Last year they were down, but this year, they are back at the top,” he said. “The Patriots are a team that nobody wants to be at the top anymore, but guess what: We’re back again, so you have to stop them.”

– Former Bruins coach and player Mike Milbury said he was walking around Faneuil Hall recently when a police officer recognized and congratulated him.

Milbury assumed the congratulations were for being honored at The Tradition. He was wrong.

“Your anniversary is coming up,” the officer said. “The shoe incident on the 23rd.”

The shoe incident, of course, references a famous brawl in 1979, when the Bruins entered the stands and fought fans in New York. Milbury could be seen pulling off a man’s shoe and smacking him in the leg with it.

“I get such a bad rap for this,” Milbury said.

According to Milbury, New York fans would throw bottles of vodka and batteries at players. After the game in ’79, Milbury went straight to the locker room, but his teammates didn’t follow. Milbury hurried back out and saw the mayhem. He ran up the stairs and found teammate Peter McNab with a fan in “a very compromising position, feet up in the air.”

“So I grabbed at his leg, and then I took his cheap little penny loafer off and hit him on the thigh,” Milbury said, as the crowd laughed. “And for that, I got six games and a lifetime of suffering.” 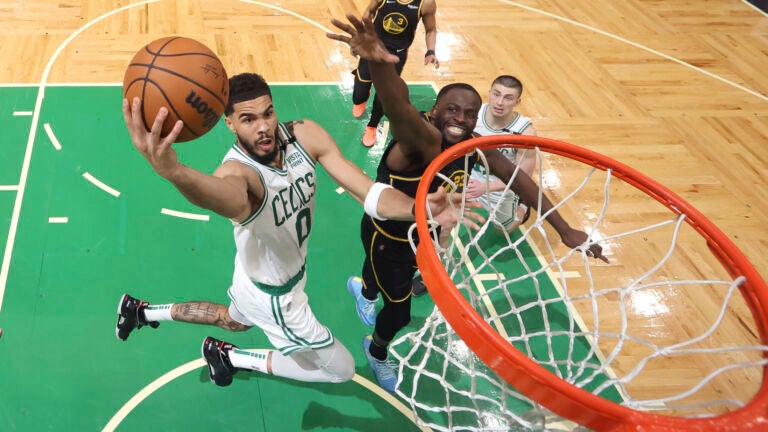