A Boston SoulCycle instructor biked close to 100 miles in 90-degree heat, raising close to $6000 for cancer charities — without ever previously riding a road bike.

Madison Ciccone, 33, had signed up for other athletic events in the past, but nothing on the scale of the Pan-Mass Challenge, a fundraising bike-a-thon that raises more money for charity than any other single athletic fundraising event in the world. The 2-day ride stretches from Sturbridge all the way to Provincetown, offering a variety of routes from 25 to 211 miles.

A SoulCycle instructor since 2016, Ciccone knows her way around a stationary bike — but had limited experience with road biking.

“I was really banking on my cycling skills from Soul, and I’m always on the city’s Bluebikes, but I had never really clicked into a road bike. That’s a completely different ballgame,” she told Boston.com.

Ciccone agreed to take on the challenge two months before the start date of August 6. She was undeterred, she said, and inspired by the charitable aspect of the Pan-Mass Challenge, which raises money for the Dana-Farber Cancer Institute.

“I feel like everyone is affected by [cancer] in some way,” she said. “I’ve lost aunts and grandmas, and my boyfriend recently lost his dad. It’s not very challenging to attach yourself to an organization like this and feel for it on a deep level, to be like, ‘Hell yes.”

Ciccone was recruited by a friend to join Team Next Gen, a Pan-Mass Challenge 40-person group primarily made up of riders whose families and friends have participated in the challenge in years past.

The team’s 100-mile trek raises money, or “Pedal Partners” for a young Dana-Farber patient battling leukemia. The group has funded 4-year-old King Gaylor’s treatment for the past two years, and wear “Kangaroos for King” on their uniforms.

Ciccone had less than two months to prepare for the challenge, borrowing a road bike from one of her SoulCycle riders to take test runs on forest trails, on top of teaching 12 SoulCycle classes a week. But when the day of the ride came, Ciccone still felt a little unprepared.

“I thought the race should be a breeze and it was not a breeze,” she admitted. Ciccone had to face an additional obstacle that doesn’t affect indoor riders — the ongoing heat wave. August 6 saw intense temperatures spiking at 88 degrees and 94% humidity. Ciccone explained that there were medics “everywhere,” in case riders passed out due to the heat.

“As a SoulCycle instructor, I’ve ridden through some pretty crazy circumstances,” Ciccone said. “This took a whole new level of mental toughness.”

But some special visitors were able to lift the team’s spirits in the grueling conditions as 4-year-old King and his family greeted the bikers at one of their water stops in Lakeville.

“It was just when I was hitting my wall,” Ciccone said. “It’s really hard on your body, but you’re crying because you know you’re doing it for a bigger purpose.”

The team was able to push forward, with Ciccone using her SoulCycle expertise to play motivating music. She said that she’s grateful for the camaraderie the challenge brought her: “The hottest commodity and currency is community and I got dropped into a really awesome, purposeful one.”

Ciccone ended her challenge after one day, biking almost 100 miles. Individually, she has raised $5700 with a personal goal of $6000. Donations are open until October.

After the physical and mental toll the ride took, Ciccone said she plans to return to the Pan-Mass Challenge in the years to come.

“The craziest freaking thing is that I’m gonna do it again,” she said. 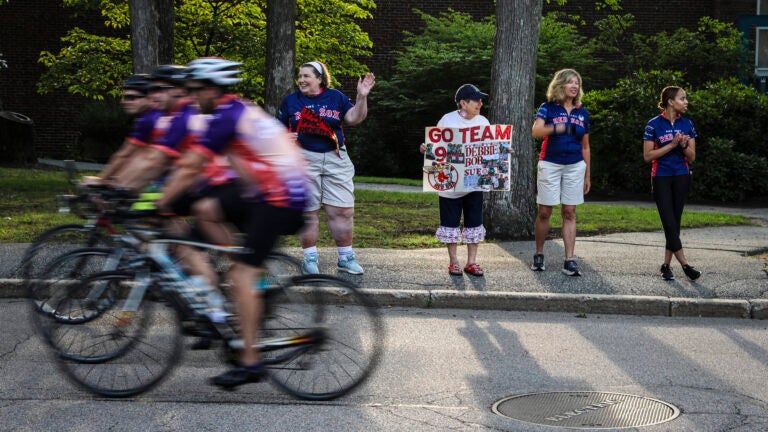 See the action from the 2022 Pan-Mass Challenge