Welcome to Season 6, Episode 19 of the Unconventional Preview, a serious-but-lighthearted, often nostalgia-tinted look at the Patriots’ weekly matchup that runs right here every weekend.

MINNEAPOLIS – It’s odd to say because it’s the whole reason we’re here, but sometimes, in the long buildup between the conference championships and the Super Bowl, the game can start to feel like an afterthought. The hype about every ancillary subject to the game is so relentless that it can become consuming. It’s a silly season unto itself, but it can start to seem like it matters if you’re existing within the Super Bowl bubble.

Every feature on every possible subject from every possible angle has been written. Every hot-take has been bloviated and regurgitated again. Dumb stuff, like radio row media feuds, start to convince you they’re important. Super Bowl week is a weird existence, man.

But the reminder is coming. The real thing is near. For all of the nonsense that precedes the actual game, the payoff is usually spectacular.

The Patriots will be playing in their eighth Super Bowl of the Bill Belichick/Tom Brady era Sunday when they take on the NFC champion Philadelphia Eagles. They will be going for their sixth win. Their biggest margin of victory is six points, and that came in last year’s epic 34-28 overtime victory over the Falcons. They have won by three points three times and four points another. The two they have lost have both been by three points. History, and the obvious competence of Doug Pederson’s Eagles, suggest another thriller is coming. While the buildup to the game is never-ending, the game itself goes so fast, probably because you’re hanging on every single play.

Just remember to enjoy it. In too many ways, Super Bowl week is designed to suck the joy out of seeing your team in the biggest annual event in American sports. But the game itself often makes up for it, and I suspect this one will too. Thank goodness the oasis is real.

Kick it off, Gostkowski, and let’s get this one started … Rob Gronkowski: The Patriots have made the Super Bowl four times since drafting Gronk in the second round of the 2011 draft. Gronk has missed one with a back injury (the Super Bowl LI win over the Falcons), was a hobbled decoy due to an ankle injury in another (two catches for 26 yards in the Super Bowl XLVI loss to the Giants), and was close to his beastly best in the other (6 catches, 68 yards, one touchdown in the Super Bowl XLIX victory over the Seahawks.)

It’s a tribute to the sheer talent and dedication of those on last year’s team that they won without Gronk. Bill Belichick might even admit as much someday. Remember, in “Do Your Job,’’ he acknowledged that the Patriots might have a larger collection of Lombardi Trophies had Gronk remained healthy in certain seasons.

From what I’ve gauged from readers and fans out here in Minneapolis, few among us were concerned that Gronk would fail to clear concussion protocol after taking a helmet-to-helmet hit in the AFC Championship Game. But as this week went on, and he still hadn’t gained clearance from Patriots doctors, it would have been understandable to wonder if recovering from Barry Church’s hit was becoming more of a struggle than we knew.

You never know with head injuries. But Gronk cleared protocol Thursday, and he seemed like his normal happy-go-lucky self at media availability later in the day. It was good to see him back, just as it will be good to see him out there Sunday.

He’s one of the great weapons in football history. It’s no fun when the Patriots are without him for their most important battles.

James White: Well, he does have something of a recent track record in Super Bowls, you know. Do you ever just look at the box score, highlights or summary of that game and still smile at what White accomplished? I find myself marveling at his stat line – 14 catches for 110 yards, 6 rushes for 29 yards, a two-point conversion, three total touchdowns (including the winner in OT), and 20 total points scored – every time I’m looking up or revisiting something about that game. And to think White didn’t play in Super Bowl XLIX in Seattle and was an afterthought entering Super Bowl LI, with Dion Lewis expected to be the bigger contributor. He wasn’t quite as unexpected a hero as Malcolm Butler was against the Seahawks. But it’s close. White, who has three touchdowns in two playoff games this postseason, will be a factor against the Eagles. And don’t sleep on Rex Burkhead, either. He has eight touchdowns in 10 regular-season games this year and even has managed to avoid maiming Brady for two weeks now. 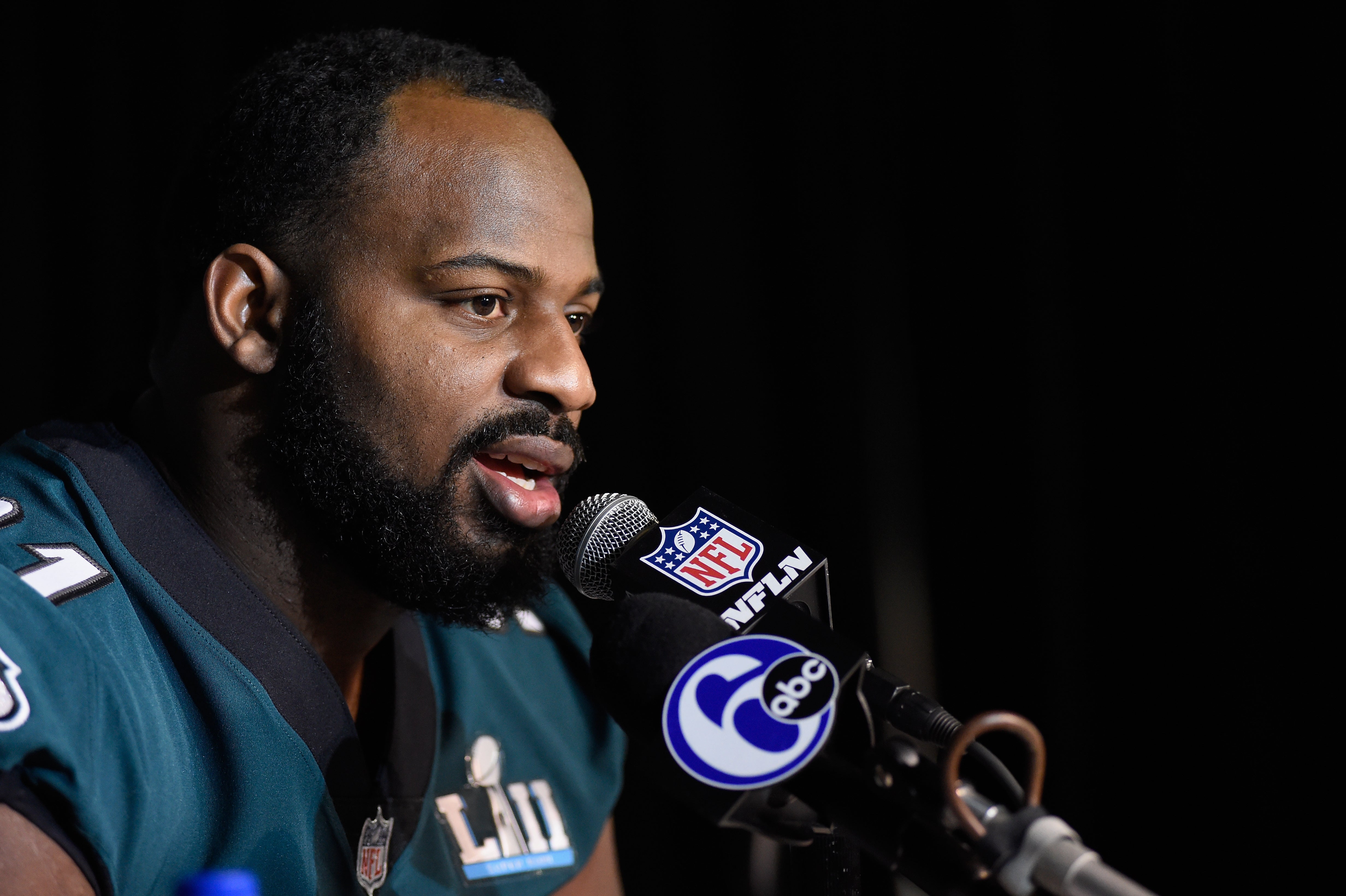 Fletcher Cox is in his sixth season in the NFL.

Fletcher Cox: I think we’ve all heard the theory quite a few times this week, right? We hear it every Patriots Super Bowl.

The way to neutralize Brady and the Patriots offense is to pressure him up the middle relentlessly, make him think about the rush, force him to get the ball out even earlier than he wants, and prevent him from stepping up in the pocket and buying a split-second or two that can be the difference between an incompletion and an NFL Films highlight.

Some even call it the blueprint to beating Brady. The Giants did it to upsetting effect in their two Super Bowl victories over the Patriots. The Falcons, with Grady Jarrett having the game of his life last year, did it through the first three quarters before they ran out of gas.

The Eagles? They struggled to compile sacks late in the season, with one stretch where they had just nine in six games. But they have generated pressure even when they haven’t sacked the quarterback, and they do it without sending extra rushers. The Eagles rarely blitz. There’s no Strahan/Tuck/Umenyiora level of star power here, but it is a group worthy of respect. Cox (5.5 sacks, and a force against the run) is the best lineman in a group that includes Timmy Jernigan, Brandon Graham, Vinny Curry, and old friend Chris Long.

Did you hear about this one? Falcons owner Arthur Blank sniveled to The New York Times this week that he did not at all appreciate the Patriots embedding 283 diamonds in their Super Bowl LI championship rings. The jewelry was earned after the Patriots rallied from a 28-3 deficit – ah-ha! – to beat Blank’s Falcons.

Oh, lighten up, Art. When you come back from 25 points down with barely more than a quarter remaining to win the fifth Super Bowl of your quarterback and coach’s mutual tenure, you’re allowed to commemorate it with as many shiny jewels as you want.

Especially if the owner of the losing team happened to be prancing around the sideline in premature satisfaction when his team was up 25.

Prediction, or has anyone heard from Freddie Mitchell in the last 13 years?

Question: Have the Patriots exhausted all of the improbable and extraordinary ways to win a Super Bowl? They’ve prevailed via not one but two game-winning field goals in the final seconds. They came back from 10 down in the fourth quarter against a ferocious Seahawks defense to win their somewhat elusive fourth title. Then they pulled off the comeback of the ages and won the first overtime game in NFL history The only more improbable path to victory is one no one would want to consider: The Patriots, who so oddly have never scored in the first quarter of any of their Super Bowls, fall behind early, Tom Brady gets hurt, and Brian Hoyer comes in and delivers a victory in relief. Hey, I told you no one would want to consider it. If you’re annoyed I ever suggested such a plot twist, go knock on some wood or something.

The more I think about it, the more convinced I become that this will be a win for the Patriots, but not a wild and dramatic win. I would not be shocked if it’s a stylistic replay of the first time the Patriots and Eagles met in the Super Bowl 13 years ago.

Remember, Super Bowl XXXIX was tied 14-14 after the third quarter. Corey Dillon’s short touchdown run and an Adam Vinatieri field goal gave the Patriots a 10-point lead in the fourth, but the Eagles got a touchdown from future brief Patriot Greg Lewis to cut it to 3. Victory wasn’t sealed until Rodney Harrison picked off a pass by heaving Eagles quarterback Donovan McNabb in the final minute. The Patriots won, 24-21, to win their third championship in four years. Sound familiar? If not, it will. We’re about to see it again. Though I don’t expect Nick Foles to literally barf on the final drive like McNabb did. Only figuratively. I hope Eagles owner Jeffrey Lurie isn’t too offended by the Patriots’ rings.