Get the latest sports alerts sent directly to your phone. Download the Boston.com mobile app on your Apple or Android device.

Tom Brady fumbles with just over 2 minutes remaining in the game, giving the ball back to the Eagles, who lead by five (10:07 p.m.)

The Eagles take back the lead with 2:21 remaining in the game on a touchdown pass from Nick Foles to Zach Ertz. This touchdown also survives review. The Eagles don’t convert on another two-point try, 38-33 Eagles (10:02 p.m.)

I have absolutely no idea what they’re gonna call here.

Fitting that the Super Bowl hangs on whether it’s a catch.

I say no touchdown. Didn’t survive the ground

The Eagles & Patriots have combined for 1,080 total yards tonight, the most combined yards by two opposing teams in a single playoff game in NFL history#SBLII

Ertz picks up the first down on fourth-and-one.#FlyEaglesFly

The Patriots take their first lead of the game as Tom Brady hits Rob Gronkowski in the corner of the end zone, 33-32 Patriots (9:43 p.m.)

Tom Brady and Rob Gronkowski have connected for 12 postseason touchdowns (including 2 tonight), tying Joe Montana and Jerry Rice for the most by a QB/receiver duo in NFL history

The touchdowns keep coming. This time Tom Brady finds Chris Hogan in the end zone to pull the Patriots back within three, 29-26 (9:16 p.m.)

Tom Brady has two of them, including tonight (404)

I agree with the stands. It was close but the initial ruling dictated. Good for Riveron/Yurk to stay with the standard that it not obvious that the call was wrong. Slight movement of the ball and slight bobble but slight is not enough to overturn.

The Eagles answer as Nick Foles throws a strike to Corey Clement for a touchdown. Clement’s catch stands on review, and the Eagles now lead 29-19 (9:08 p.m.)

Agree with the call or not, the Eagles got Marquis Flowers on Clement, and that’s yet another matchup advantage they’ve created tonight. 29-19.

After review: The ruling on the field STANDS.

I say no touchdown. Juggled it a bit and stepped out before he re-gained possession

Tom Brady finds Rob Gronkowski for a Patriots touchdown on the first drive of the second half to cut the Eagles lead to three, 22-19 (8:52 p.m.)

Here are some halftime notes and a clip from Justin Timberlake’s performance (8:47 p.m.)

‘Minneapolis, Minnesota, this one’s for you.’ pic.twitter.com/1L0RJMJOgY

Most popular question on timeline is why no Malcolm Butler. NBC broadcast called it a “coach’s decision.” Will be a question asked to both Bill Belichick and Butler after the game.

276 yards for Brady in the first half pic.twitter.com/mjxpBaVT5v

One of THE wildest plays we’ve ever seen in a #SuperBowl. Hands down.

Trey Burton played QB at the University of Florida. He can throw. The Patriots find that out the hard way. Bold gambit and a creative play call by the Eagles on fourth and goal from the 1.

.@dharm32 is a Pinball Wizard! #SBLII

Alshon Jeffery almost hauled it in.

Danny Amendola’s pass attempt to Tom Brady was just the 3rd time Brady has ever been targeted as a receiver and the first to fall incomplete. Brady had previously caught both intended targets for 59 receiving yards. #SBLII

It is the first Patriots game in which Butler did not play a first quarter snap since Super Bowl XLIX, which he capped with a game-sealing INT

The @Patriots get tricky…

After the Eagles failed to get a first down and punted, Patriots receiver Brandin Cooks took a big hit from Eagles’ Malcolm Jenkins. He’s been ruled out of the game (7:25 p.m.)

#Patriots injury update: Brandin Cooks (head) has been ruled out for the game.

The play that helped set up the @Eagles TD…

Those three points mark the first time Tom Brady has ever scored a point in the first quarter of a Super Bowl. Only took him eight games to do it

Yikes, almost intercepted. Brady would’ve had a TD if he puts his throw out in front of Gronk.

So many wide open receivers. McDaniels did his homework. Jim Schwartz needs to adjust

Reminder: The @Patriots have never scored in the first quarter in any of their Super Bowl appearances in the Brady-Belichick era

Third play of the game, and Brady catches the Eagles with 12 on the field thanks to the no-huddle offense

where have we seen this before? ? pic.twitter.com/0tqu97d1Z2

Malcolm Butler, who had an illness earlier in the week and arrived at the Super Bowl one day later than the team. opens the game on sideline in place of Eric Rowe in Big Nickel package.

If you’re an @Eagles fan, you’re gonna want to turn your sound on for this. #FlyEaglesFly pic.twitter.com/4ORZbjsosw

Tom Brady​ is welcomed onto the field by the Philadelphia faithful. #SBLII pic.twitter.com/lyXWpqSbs4

.@DannyAmendola takes the field for warmups! 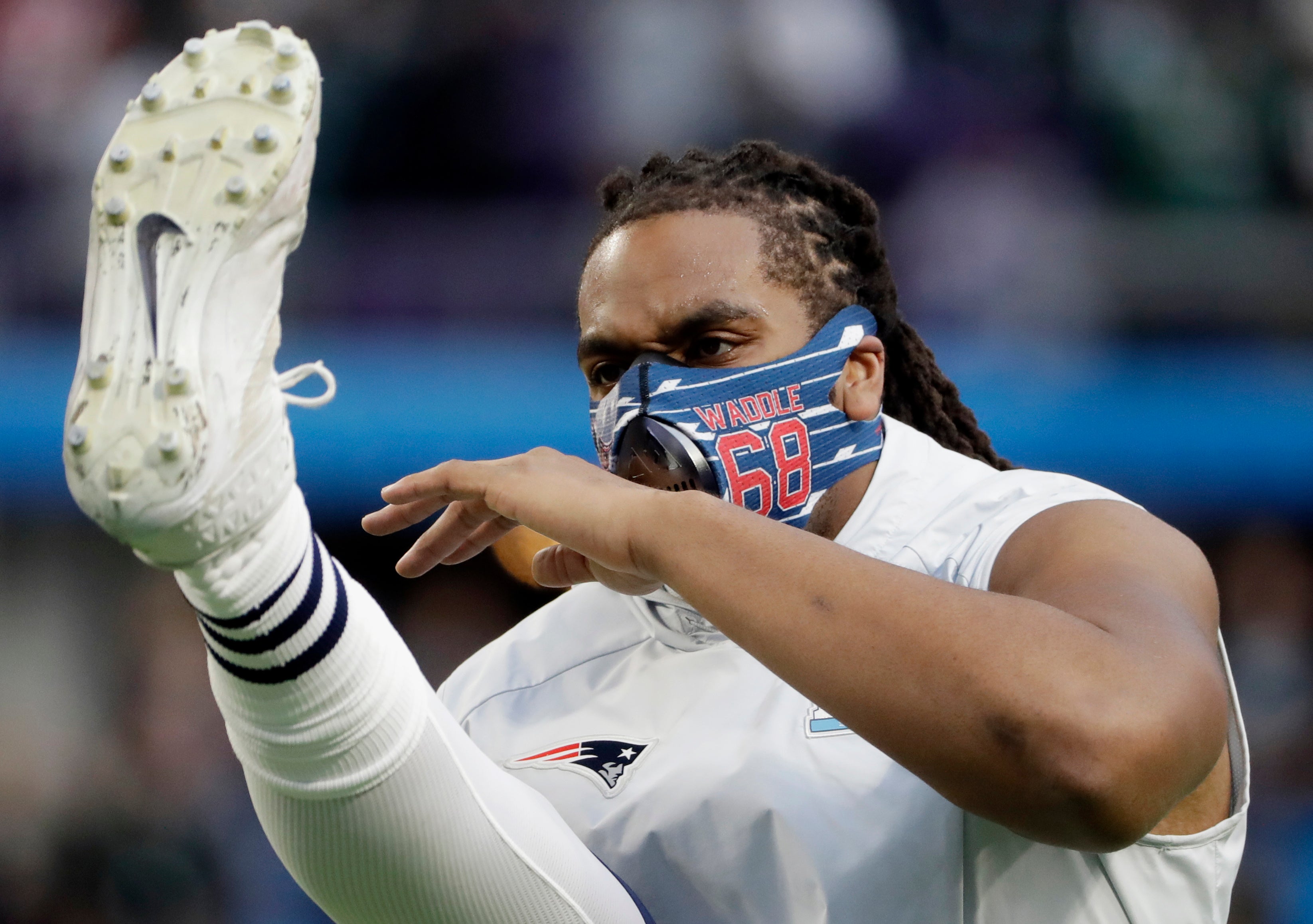 when you realize you’re playing in the SUPER BOWL ? pic.twitter.com/YCe3XCWfT1

Tom Brady to Jim Gray on Westwood One: “You’re gonna see me playing football next year.” So that should settle that pic.twitter.com/0GhIhYDR60

Listen to the full interview over at Westwood One Sports. 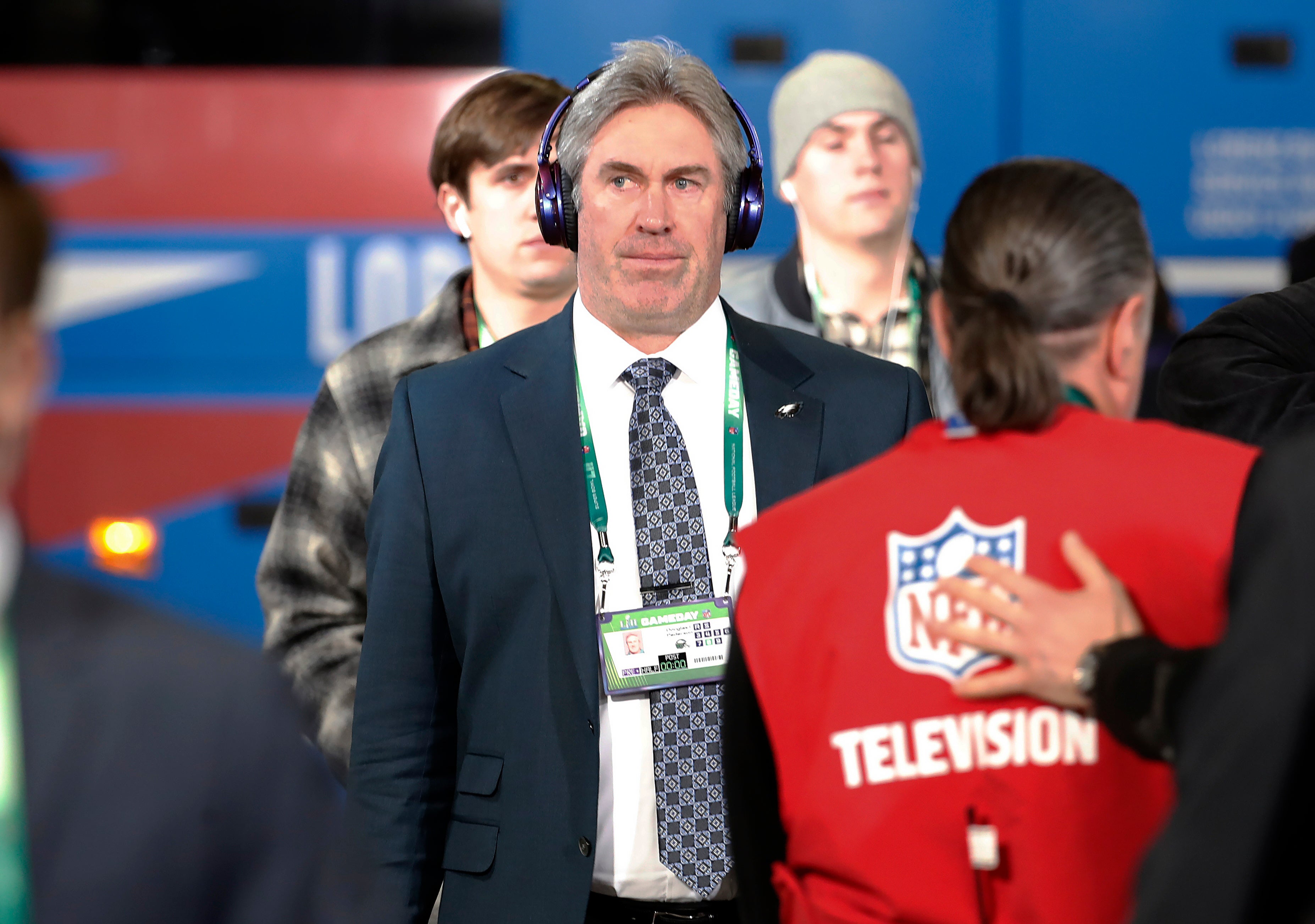 Sunday is off to a good start for Patriots fans who also root for the Celtics. Al Horford hit a buzzer beater to put the C’s past the Trail Blazers 97-96. Out with the Crisco, in with the hydraulic fluid.

According to ESPN, after Crisco failed to prevent reveling Eagles fans from climbing on poles after the NFC Championship Game, Philadelphia police called an audible — and are using “hydraulic fluid” on Broad Street poles before the Super Bowl. From ESPN:

The crew tasked with applying a slippery substance to poles had labeled themselves the “Crisco Cops” for the NFC Championship. This time the crew that was working up and down Broad Street, where much of the postgame action is expected to unfold, some six hours before kickoff, went with “Pole Patrol.”

Read the full story over on ESPN.com.

Philadelphia pole climbers: meet your match tonight. As predicted, no Crisco on the poles. Instead, police are using hydraulic fluid. And it’s water resistant, too, they said, so this afternoon’s rain won’t make it any easier for you to climb. pic.twitter.com/5GvI9BRhaQ

If you can’t wait, a lot of Super Bowl commercials are already online. Check out these links for more:

The Patriots had their team photo taken Saturday at U.S. Bank Stadium.

Behind the scenes of the #Patriots #SuperBowl team photo day: pic.twitter.com/psYyi9P50s

Video may take a moment to load.

For New England Patriots quarterback Tom Brady, football is more than a game – it’s a spiritual vocation. Football is what gives his life purpose. But the clock is ticking, Tom’s children are growing up fast, and his wife, supermodel Gisele Bundchen, is losing patience with Tom’s all-consuming devotion to his sport. Time is all we have – and Tom is painfully aware of it. How much longer can he keep playing the sport he loves?

Patriots players tell Andrea Kremer what it’s like inside the locker room (11:49 a.m.)

NFL Network’s Andrea Kremer sat down with Patriots’ players to get the inside scoop on the team’s locker room atmosphere.

What’s it really like inside the @Patriots‘ locker room? @Andrea_Kremer gets an inside look. ⤵️

An emotional Randy Moss talks about making the Hall of Fame (11:34 a.m.)

Randy Moss got emotional when describing how much being inducted into the Hall of Fame meant to him. pic.twitter.com/uNECDCN0EX

The Prudential Center in Boston was lit up Saturday night with a pro-Patriots message:

We may be in Minnesota, but we’re feeling the love from Boston. #NotDone pic.twitter.com/kYH4YAeOdk

Tina Fey, who grew up outside Philly, and Rachel Dratch, a Lexington native, returned for a Revolutionary War-era sketch.

Also, “Weekend Update” anchor Colin Jost took a shot at both fanbases with one joke — for the second week in a row.

A “goat” wearing a Tom Brady jersey took a ride on the Bruins’ Zamboni during Saturday’s game against the Maple Leafs. The B’s won 4-1.

Tom Brady and Julian Edelman posted hype videos to social media Saturday, and Brady did so again on Sunday. Watch them below:

There is a storm coming #LFG

Tom Brady wins MVP, Randy Moss makes Hall of Fame, and more to get you caught up this Super Bowl Sunday (10:10 a.m.)

Patriots quarterback Tom Brady was named the NFL’s 2017 Most Valuable Player on Saturday.

A message from the MVP: pic.twitter.com/bHuJGvy6Vy

Also on Saturday, former Patriots wide receiver Randy Moss was voted into the Pro Football Hall of Fame, with a class including Ray Lewis, Brian Urlacher, and Terrell Owens. Watch the moment Moss found out:

Here’s how @RandyMoss reacted when he found out he was headed to Canton. (via @ProFootballHOF) pic.twitter.com/cZzpis0D75

In addition, it was picture day at U.S. Bank Stadium on Saturday: 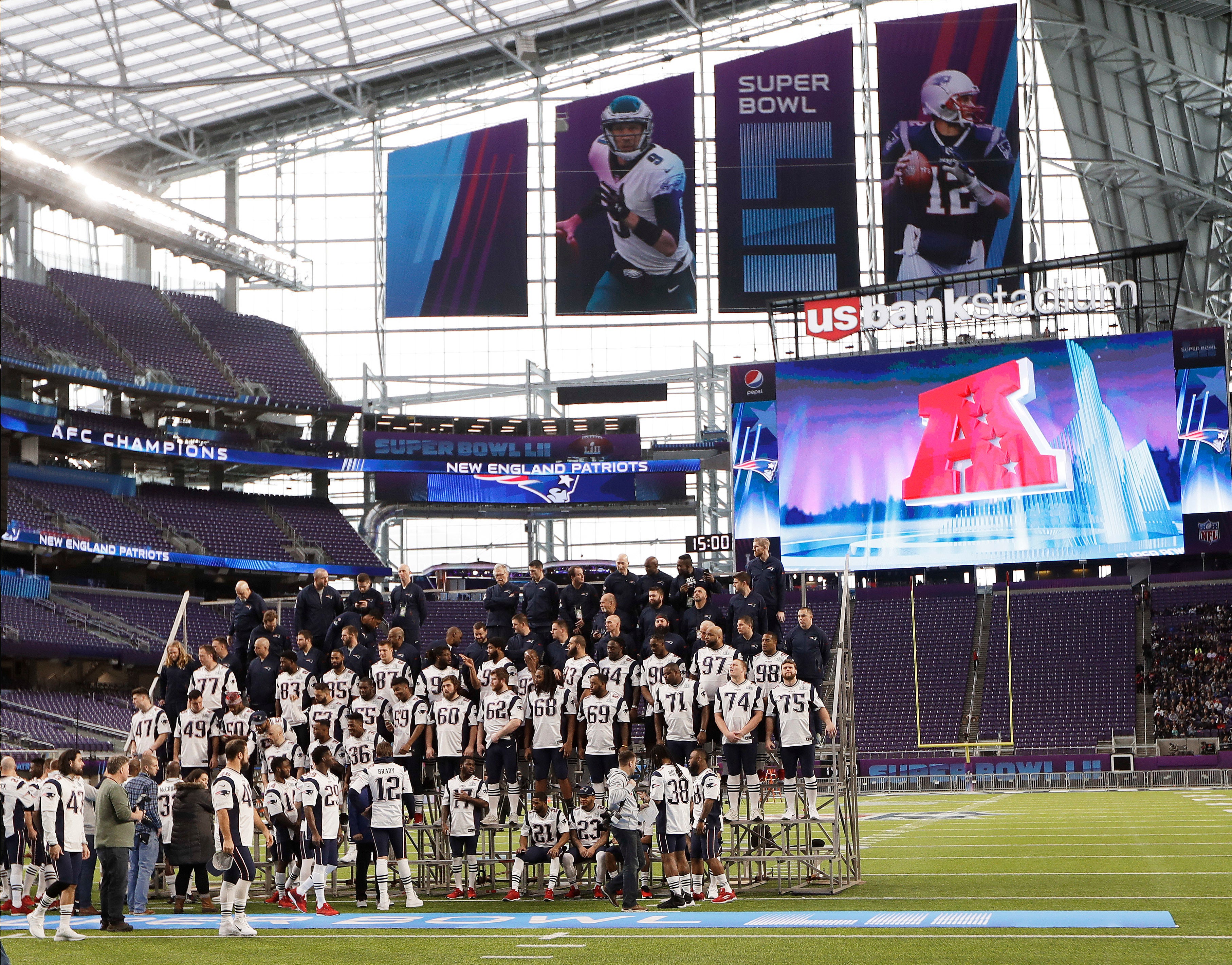 The New England Patriots assemble for their team photo in U.S. Bank Stadium on Saturday.

More links to get you caught up: