The Prince and Princess of Wales were scheduled to leave the Celtics’ game against the Heat at TD Garden on Wednesday at halftime. After a transatlantic flight and other appearances around Boston, all while dealing with the remnants of a five-hour time difference at the start of this three-day visit, it made sense.

But as the slam dunks piled up and the music played and the crowd rumbled, William and Kate were apparently having too much fun to call it a night. So they returned for the second half and watched Jayson Tatum pour in 49 points in the Celtics’ 134-121 win.

“They were going on 22 hours being up,” Celtics co-owner Wyc Grousbeck said, “and they didn’t want it to stop.”

Globe Audio · For these superfans, a glimpse of royalty is everything

It was the first NBA game the prince and princess have attended since watching LeBron James and the Cavaliers face the Nets in 2014, and some parts left them perplexed. For instance, Grousbeck said, they didn’t quite understand why both teams insisted on shooting from so far away. Then he explained the 3-point line to them.

Celtics co-owner Steve Pagliuca said William was fascinated by guard Marcus Smart’s green-tinted hair. After asking about it, he rubbed his own bald pate and said maybe he would try it himself.

“They were just very down to earth,” Pagliuca said, “very personable.”

The TD Garden visit was mostly kept under wraps by Kensington Palace, with the official three-day itinerary released to some news organizations listing this appearance as “strictly embargoed until arrival.”

William and Kate walked to their seats positioned between the two team benches about a half-hour before tip-off, and there was little reaction in the half-full arena. The couple was flanked by luminaries including Mayor Michelle Wu, Attorney General and Governor-elect Maura Healey, and Grousbeck and Pagliuca.

When the arena’s lights were turned out prior to the national anthem, Celtics All-Star Jayson Tatum walked over and shook hands with the prince and princess, too. Then the game began, and Tatum threw down a powerful one-handed dunk. Moments later he was fouled as he hit a deep 3-pointer directly in front of the prince and princess.

“They were really marveling at what Jayson was doing out there,” Pagliuca said.

William and Kate were introduced to the crowd during a timeout early in the second quarter. They received a generally warm reception, but some boos were sprinkled in. When the couple was shown again on the arena’s video board a few minutes later the reaction was similar, and it was followed by some scattered “USA!” chants. Pagliuca said the couple got a good laugh at the gentle heckling.

Because of the general secrecy of the appearance, fans had no real advance warning. But South Boston resident Kathryn Lehman, 32, heard rumors of the potential royal arrival early Wednesday afternoon, so she and friend Katie Grady, 34, spent about $205 apiece for lower level tickets.

Lehman said she had a chance meeting with William 11 years ago while studying abroad in Brisbane, Australia. She walked past a library where he happened to be making an appearance and William came outside to greet about a dozen curious onlookers.

On Wednesday, she could simply watch from afar.

“We’re in our early 30s, and so we grew up with this vision of a fairytale, and Kate was someone who was a commoner and grew up super normal and married into the royal family,” Lehman said. “I feel like we were of the age where we could witness that entire love story and really appreciate it.”

The Celtics were generally less impressed, however. Forward Jaylen Brown said it was just a regular game to him. Coach Joe Mazzulla said the only royal family he knows of is Jesus, Mary, and Joseph. Guard Derrick White was briefly held up by the commotion leaving the court.

Throughout the game, there were nods to the Earthshot Prize, the environmental awards founded by William and the Royal Foundation in 2020 that will be given to innovators in a ceremony at the MGM Music Hall on Friday.

Ollie Perrault, 15, of Easthampton, was honored Wednesday for being the founder and director of Youth Climate Action Now, and William and Kate asked to meet with her and spoke to her for several minutes.

Grousbeck and his wife, Emilia, left a personalized bottle of Cincoro tequila, the company they co-founded, in a private room reserved for the prince and princess in the bowels of the arena. The couple insisted on taking a sip at halftime, Grousbeck said. Then they watched the second half alongside Celtics legend Satch Sanders, whose No. 16 hung in the rafters above them.

“They couldn’t have been better guests,” Grousbeck said. “They were super-nice people and they’re all about everybody else. They want to make sure everybody else is having a good time, and they’re really trying to make the world a better place.” 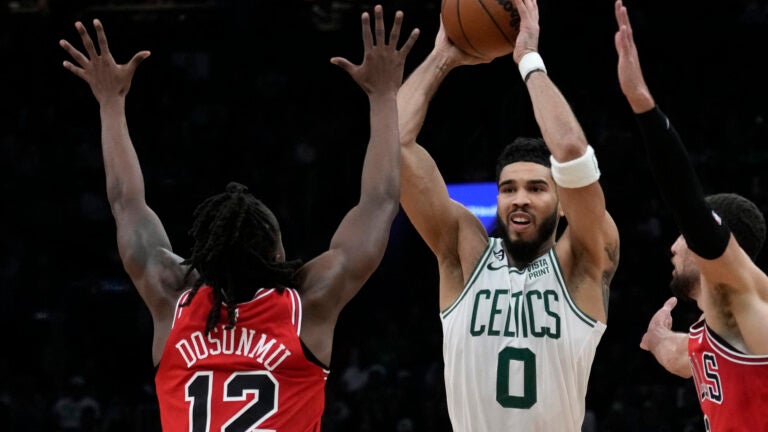 7 takeaways from Celtics win over Bulls, as Robert Williams returns to starting lineup