After Tom Brady announced that his “football journey will take place elsewhere,” teammates from throughout his 20-year career in New England reacted to the news on social media with messages of thanks, encouragement, and admiration.

Julian Edelman kept it simple, tweeting a photo of the pair running onto the field at Gillette Stadium with the caption “Family.” Later, he posted an emotional video (soundtracked by Whitney Houston) of moments between the pair in the decade they’ve shared together.

Chase Winovich was at a loss for words – tweeting a sad face.

Cornerback Jonathan Jones, who has played with Brady and the Patriots for the entirety of his career, was the first to seemingly chime in on the news.

“I don’t like 2020,” he tweeted, roughly 20 minutes after Brady posted his announcement on social media.

With Brady gone, Jarrett Stidham is now first on the Patriots’ depth chart at quarterback. Stidham, the Patriots’ fourth-round pick last season, reached out to his mentor on Instagram.

“Love you brother!” he wrote. “Thank you for everything!”

Joejuan Williams tweeted two photos – one of the pair walking together, and another of a white Tom Brady jersey.

Thank you for everything @TomBrady ‼️ Forever 🐐 pic.twitter.com/zivxaNtVla

Patrick Chung, who played with Brady from 2009-12 before a second stint began in 2014, took the focus away from football in his response.

“Don’t worry about anything but you and your family boss!” wrote the safety. “It’s been a pleasure man. Thank you for being you. Not even the QB but just the man you are. You’re wife and kids have an amazing person to call their father and husband. Until we meet again boss!” 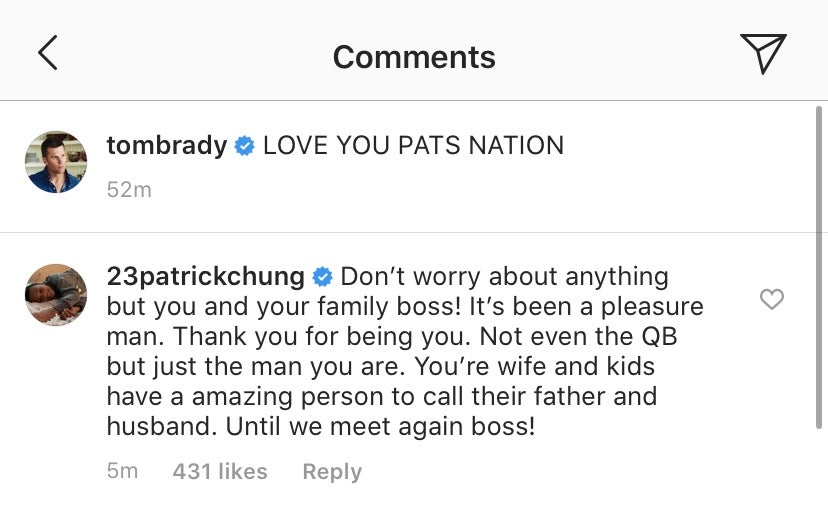 Danny Amendola posted a photo of the pair embracing on Instagram.

The best part of catchin rocks from Tommy were the hugs.

The end of a legendary era for a true champion on & off the field. Teammate, fan, coach, or a part of ownership, we all appreciate everything you’ve done for Pats Nation. You’re the definition of a TRUE PATRIOT. Good luck in the next chapter of your career. Love you brotha! pic.twitter.com/0jpPiPgKbC

Retired defensive end Chris Long, who won Super Bowl LI with the Patriots, took issue with the timing of Brady’s announcement, which came on the morning of St. Patrick’s Day.

Matt Chatham, who won three Super Bowls with New England, said Brady’s announcement and his legacy with the Patriots was “essential learning for a New England kid” and he wanted to turn on coverage of it for his children, who are home from school due to coronavirus.

We’re all homeschooling during these bizarre times of bunkered living, but I just wanted to make sure that if I turn on the NFL GamePass tape & walk the kids thru what was so special about Tom Brady the player, they get school credit. Essential learning for a New England kid tbh

Danny Woodhead, who played for New England from 2010-12, said the news didn’t surprise him.

Seven-time Pro Bowler Darrelle Revis, who won his only Super Bowl in 2015 as a one-year member of the Patriots, reflected on the “intensity” Brady brought to the game.

“Which ever team he lands I’m sure he will continue his legacy of playing a great brand of football,” Revis wrote, sharing a photo of the pair walking side by side.

Practice against Tom Brady everyday was like playing on the 92’ Dream Team. He brought that much intensity to the practice field. Which ever team he lands I’m sure he will continue his legacy of playing a great brand of football. #TB12 pic.twitter.com/Y6tKUOapIk

Running back Stevan Ridley, who was drafted by New England in 2011, encouraged Brady on Instagram as he moved on to his “next chapter.” Chicago Bears wide receiver Cordarrelle Patterson, who helped the Patriots to victory in Super Bowl LIII, reached out to Brady on Twitter, letting him know he “heard the news.”

@TomBrady good morning! Heard the news. Just making sure you are good? Asking for my friends..

Rob Ninkovich, who played in New England from 2009 to his retirement in 2016, commented on Brady’s announcement on Instagram.

Antonio Brown showed his support by adding a goat emoji under one of Brady’s Instagram announcements. 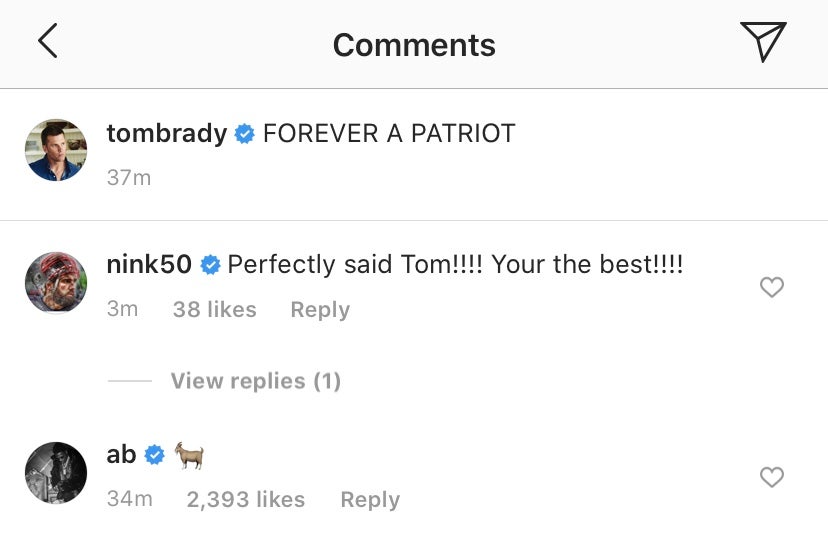 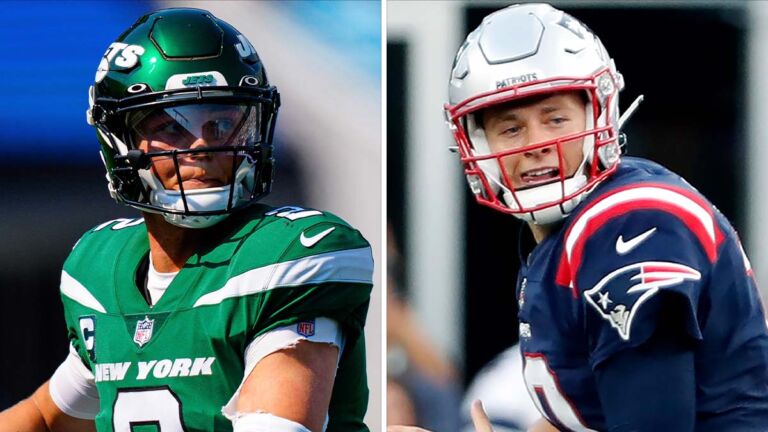