If the rematch of “The Match” is going to be lit, it needs more than the fleeting sparks that came from the first showdown between Phil Mickelson and Tiger Woods in 2018.

In that one-on-one match in which the entire purse of $9 million went to the victor (Mickelson, in 22 holes), neither golfer played especially well, the competition did not have a compelling conclusion, and their interactions became more stilted the longer they played.

It was OK. It could have been better.

To their credit, the golf superstars and Turner broadcasting got together to come up with a better format for the sequel — and this time it’s for a better cause than Mickelson’s bank account.

“The Match: Champions for Charity” airs Sunday at 3 p.m. on Turner Broadcasting’s family of stations: TNT, TBS, truTV, and HLN. This time, Mickelson and Woods won’t be the only champions on the course. Mickelson will be paired with Tom Brady, while Woods will partner with Peyton Manning in a pro-am four-ball format.

WarnerMedia, the parent company of Turner Broadcasting, and the golfers will collectively make a charitable donation of $10 million to benefit COVID-19 relief.

Turner has put together an eclectic broadcast team for the event. Brian Anderson, who calls MLB and NBA games for the network, will handle play-by-play. Charles Barkley, who was his typically hilarious self as an analyst in the first Woods-Mickelson match, is back in that role.

Former Masters champion Trevor Immelman is also an analyst, while Amanda Balionis and PGA Tour player Justin Thomas — like Woods, a member at Medalist Golf Club in Hobe Sound, Fla., where the match will be played — are the on-course reporters.

“We’re going to have fun with it. It’s not going to be serious, though we think the competition will end up being serious with the pride that these guys have,’’ said Anderson, an alumnus of the Golf Channel who has called numerous made-for-TV events. ”There was the idea that it was a cash-grab the last time, and this time a ton of money is going to be raised for charity. It should be really fun. We’re trying to entertain. It’s not a major. We’re not asking them to act like it. I think the whole picture will end up being really good.”

Anderson said the addition of the legendary quarterbacks — particularly Manning — should enhance the interaction and humor compared to the previous Mickelson/Woods showdown.

Trash-talk is encouraged. And Manning, who shows a self-deprecating sense of humor in his assorted commercials and television appearances, is being counted on as an instigator.

“Peyton is aw-shucks and a nice guy, but those who have played with him talk about how ruthless he is, but in a good way, with a sense of humor,” said Anderson. “He has played so much golf with Tiger, a lot of social golf, in pro-ams, and they really know each other well and know each other’s game.

“Tiger is a different person around Peyton Manning. He’s lighter. Tiger becomes a much better trash-talker around Peyton. That’s the dynamic I’m interested to see.

“And Tom is going to be sneaky-funny, and Phil is nonstop anyway. So I really like the dynamic.”

Barkley will be able to communicate with the players, who will be wearing earpieces. Their golf carts will also be equipped with cameras to catch some of the between-holes conversation.

Anderson knows his job as the play-by-play man is to keep it simple on an event such as this.

“I’m the bass player. I’m just sitting in the back, slapping the bass, making sure we stay on time,’’ he said. “There are a lot of lead singers and lead guitarists out there on the show.”

Anderson said he’ll navigate in and out of commercial breaks and serve as the traffic cop between the various voices (which will include some celebrity call-ins), but he won’t get bogged down in details on the players.

“The last thing I want to do is be buried in notes and give a bunch of Wikipedia or media guide type of information,’’ he said. “Everybody knows these players. They’re legends. So it’s not necessary. You just become the Cliff Clavin in the booth. You become the know-it-all guy if you start doing that.”

The format has some quirks that are designed for entertainment. According to Yahoo! Sports, all four golfers will play the par-4 fifth hole with a single club. And the modified alternate shot format puts pressure on Brady and Manning not to let down their partners.

“I think it could come down to Brady or Manning having to make a 3- or 4-foot putt to win the whole match,’’ said Anderson. “These are no ordinary amateurs because of the pressures they’ve thrived under as quarterbacks, but it’s every amateur’s nightmare to have to make a clutch putt on national TV in front of millions of viewers. If it comes down to something like that, that would be an incredible thing to watch.” 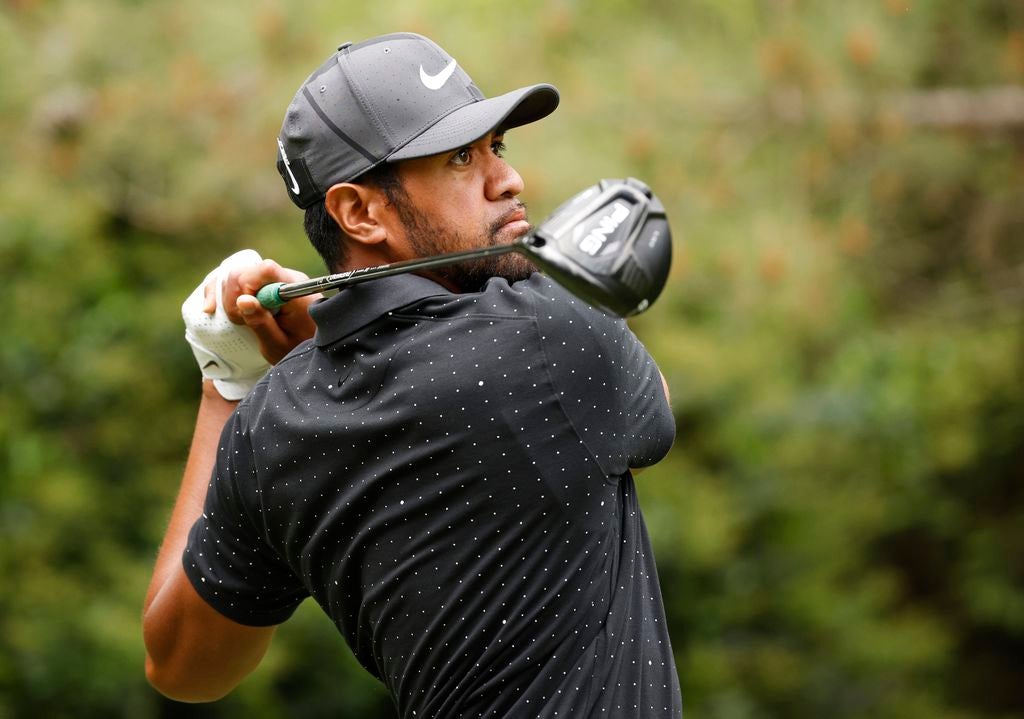 Tony Finau gets a call from Tom Brady during Masters delay