For the first time in his NFL career, quarterback Tom Brady took the field for a regular-season game in a uniform other than the New England Patriots.

He made things interesting, especially as he tried to mount a rally late in the fourth quarter, but was unable to lead the Tampa Bay Buccaneers over the New Orleans Saints in the season-opener for both teams Sunday.

The Saints capitalized on a pair of Brady mistakes – an interception in the first half that led to a Saints scoring drive and another one in the third quarter that was returned for a touchdown – for a 34-23 victory at the Mercedes-Benz Superdome in New Orleans.

Brady finished with 239 yards on 23 for 36 passing. He threw touchdown passes to O.J. Howard and Mike Evans, and ran for a touchdown to cap his first drive as the Buccaneers’ quarterback.

Below are updates as posted during the game.

Brady led an 11-play, 87-yard drive that ended with a touchdown pass to Mike Evans – his first catch of the game – that cut the Saints’ lead to 34-23 late in the fourth quarter. A 37-yard pass to Scott Miller highlighted the drive.

Saints get some breathing room

After Brady pulled Tampa Bay within one score in the third quarter, the Saints opened the fourth with a six-play, 61-yard touchdown drive to make it 31-17. The highlight was a 46-yard pass play from Drew Brees to Jared Cook that put the Saints at the Tampa Bay 15.

On the kickoff that followed, the Bucs gave the ball right back when two players attempted to catch the kickoff, the ball ended up on the turf, and the Saints recovered at the 18.

Rally in the making?

Brady led an eight-play, 41-yard drive that ended with a 38-yard field goal by Ryan Succop that cut New Orleans’s lead to 24-17 with 2:22 left in the third quarter.

Since Brady’s pick-6 at the beginning of the third quarter, the Bucs have scored 10 unanswered points to pull within one score.

On the Bucs’ possession immediately after Brady threw an interception that was returned for a touchdown and a 24-7 Saints lead early in the third quarter, he led a two-play drive that cut the lead to 24-14.

Brady hit tight end O.J. Howard on a 9-yard touchdown pass play to cap the drive, which was aided by a 45-yard pass interference penalty against the Saints.

In the third quarter, Brady threw an interception that was returned for a touchdown and a 24-7 Saints lead. Brady was trying to hit Justin Watson on the right side when Janoris Jenkins jumped the route, picked off the pass, and sprinted untouched 36 yards for the touchdown.

Janoris Jenkins jumps in front for the pick-6! #Saints

The Saints held a 17-7 lead at halftime. Brady and the Bucs got the ball back with 44 seconds left in the first half, but were unable to get anything going. An intentional grounding penalty and a missed connection on third-and-14 forced a punt, and the Saints kneeled to end the half.

Brady was 8 for 12 passing for 76 yards in the first half. He threw an interception in the second quarter that led to the Saints’ second touchdown on the ensuing possession. Gronk in on the action

While Brady’s move to Tampa Bay was among the biggest offseason storylines in the NFL, the return of one of the players who helped make Brady so successful was another. Tight end Rob Gronkowski was lured out of retirement to join Brady in Tampa.

Gronkowski made his first appearance on the stat sheet with a two-yard reception in the second quarter.

On his first snap as a Buccaneer, Brady handed off to Ronald Jones for a 4-yard gain. He threw on his second play as Tampa Bay’s quarterback and picked up a first down on a pass interference call.

He then unloaded a long pass and connected with Chris Godwin for 29 yards, part of a methodical drive that led to the Buccaneers’ first score. Brady capped the drive with a 2-yard run for a touchdown to give the Bucs a 7-0 lead.

Brady sneaks for the score! #GoBucs

Brady had 22 rushing touchdowns during his tenure with the Patriots.

Brady’s replacement in New England, Cam Newton, rushed for 75 yards and two touchdowns to lead the Patriots to a 21-11 victory over the Dolphins in an early game on Sunday.

Newton’s 75 rushing yards are the most by a quarterback in a single game in Patriots team history, beating Matt Cassel’s 65 yards in a 2008 game.

Buccaneers receiver Mike Evans is active for Sunday’s game in New Orleans after missing practice with a hamstring injury during the past week, giving Brady another key option in a loaded Buccaneers offense. 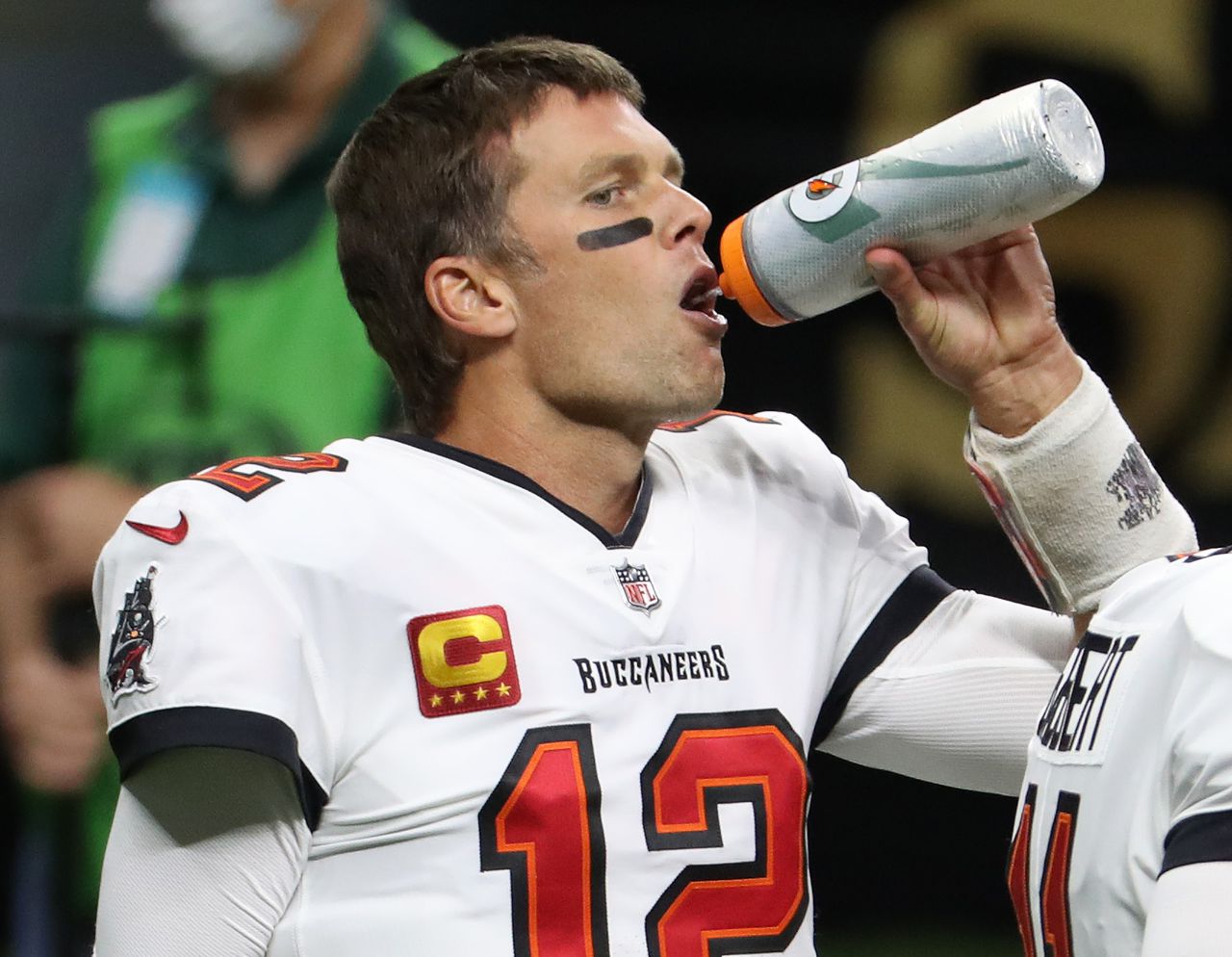 Tom Brady taking the field for warmups for the first time in a Bucs uniform: pic.twitter.com/FsrhRAPnjV

As was often a custom after Brady gradually ventured into the realm of social media during his pro career, a pregame hype video was posted to his verified accounts. Sunday’s video featured voiceover of an inspirational message by Kobe Bryant, the former Lakers star who died in a helicopter crash in January.