As 43-year-old Tom Brady prepares to play in Super Bowl LV, USA Today Sports hopped in the time machine to flash back to Super Bowl XXXVI, when the Patriots outlasted the St. Louis Rams, 20-17, in 2002.

That was Brady’s first Super Bowl win, and he’ll go for his seventh when the Tampa Bay Buccaneers host the Kansas City Chiefs on Sunday at 6:30 p.m. EST.

In the video, host Mackenzie Salmon asked NFL stars, past and present, to recount what they remember from that 2002 game. Some have no recollection of it whatsoever, while others have very specific memories.

Brady’s idol, Joe Montana, was concise and honest in his response.

“I can’t remember anything,” Montana said with a chuckle.

Tom Brady has played in a lot of Super Bowls, but NFL stars past and present can’t seem to remember his first one. pic.twitter.com/DTVRlsIyY1

Running back Mark Ingram asked Salmon if the Patriots played the New York Giants, which they did not. Tight end Robert Tonyan correctly recalled that the Patriots faced the Oakland Raiders in the snow earlier in their playoff run. Wide receiver Stefon Diggs remembered that Brady stepped in for Drew Bledsoe that year.

Todd Gurley thought the Patriots faced the Panthers, when in reality that was the following season. Barry Sanders knew his NFL history and praised the Patriots for what they were able to accomplish as underdogs.

“Just the shock of taking down ‘The Greatest Show on Turf,'” he said.

Henry Ruggs III and Chase Young were 3 and Jordan Love was 4. Derrick Henry wasn’t sure how old he was, and Cam Akers joked that he wasn’t born before clarifying that he was 2 or 3.

DK Metcalf said he was 5, Russell Wilson was 14, and Matt Ryan was 17. Christian McCaffrey said his dad was still playing and he was 6 years old.

Then 38-year-old journeyman Ryan Fitzpatrick chimed in, noting that he was 19. He correctly identified the Rams as the Patriots’ opponent and said he remembers his friend, a neurosurgeon, telling him as the game progressed that the Patriots had a legitimate chance.

Jimmy Johnson was right that Brady didn’t throw for “a ton” of yards. Brady finished the game 16 of 27 for 145 yards, a touchdown, no interceptions, and a rating of 86.2.

San Francisco 49ers tight end George Kittle said he won $250 off his family members, because he bet on the Patriots and was extremely close to picking the correct final score.

He said that was when he was a first or second-grader, and he remembers strutting around the house hyped up. 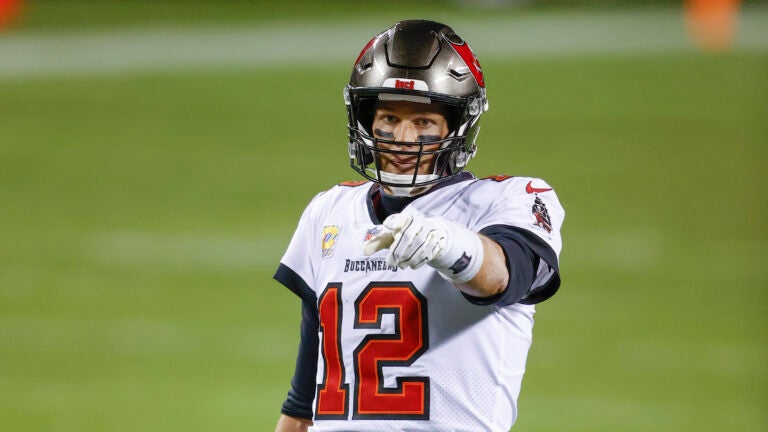 Here are the most-Googled questions about Tom Brady