There’s a Super Bowl with Tom Brady in it on the horizon, so the past few weeks have naturally featured many conversations about how Brady stacks up against other all-time greats.

Those conversations mostly focus on football – including both other quarterbacks and Patriots head coach Bill Belichick – but oftentimes they extend into other sports as well.

The most recent cross-sport breakdown came from Brady’s former teammate, Tedy Bruschi, and LeBron James’s former teammate, Kendrick Perkins. Bruschi and Perkins, in a video posted to Instagram on Friday, debated whose career arc has been more impressive.

“When we talk about the overall best athlete, that is LeBron James,” Perkins said. “No athlete in history has had the pressure that LeBron James has had since the age of 16. He was on the cover of Sports Illustrated, labeled ‘The Chosen One,’ not by himself, but by the world.”

Bruschi responded that Brady and James had extremely different paths to get to where they are now. James was always expected to excel, while Brady was the 199th overall pick and defied the odds.

He then pointed out that James is 4-6 in NBA Finals series while Brady is 6-3 in Super Bowls. Perkins countered that James has won Finals MVP every time, while Brady hasn’t.

“He just likes to spread the wealth a little bit,” Bruschi said.

Perkins chimed in that in basketball, teams have to get through three often-grueling seven-game series to make it to the Finals, whereas in the NFL teams often have to win just two games.

Bruschi replied that there have only been nine NBA champions in the past 20 years and that it’s easy to identify a handful of teams at the beginning of the season that have a chance to win it all. In football, Bruschi said, there’s more competitive parity.

Later on, Bruschi acknowledged that James’s chase-down block of Andre Iguodala helped cement his legacy, and he asked Perkins if he could give Brady any love. Perkins didn’t hesitate.

“I’m a Bostonian at heart,” Perkins said. “I love Boston. I love everything about Tom Terrific.”

Perkins believes that Brady’s journey back to the Super Bowl this season – with a new team, at his current age – speaks volumes about his all-time status. He acknowledged that Brady is the G.O.A.T. in football and said he “might be one of the greatest leaders” of all-time.

“If he do win the Super Bowl, Tedy, you and I going to have to revisit this damn conversation,” Perkins said. 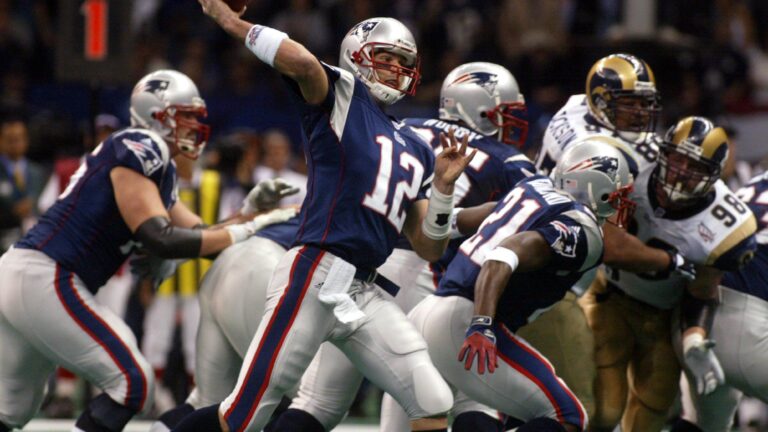