Tonight, the Bruins face the Islanders in Game 3 of the second-round playoff series at 7:30 p.m. The series is currently tied 1-1.

The Red Sox will try to avoid a four game sweep at the hands of the Astros today at 2:10 p.m. after losing to Houston on Wednesday, 2-1.

And a day after being eliminated from the playoffs, the Celtics made sweeping organizational changes. Danny Ainge stepped down as president of basketball operations, with head coach Brad Stevens moving to the front office as a replacement. Boston will now begin a search for a new head coach.

Tom Brady’s recollection of a notable fourth down moment: Though Tom Brady’s season ended with another Super Bowl win, it wasn’t all smooth sailing for the 43-year-old in his first season with the Buccaneers.

At the end of an October loss to the Bears, Brady experienced a moment of embarrassment when he appeared to forget it was fourth down on the Buccaneers’ final drive.

Following an incompletion on fourth down, Brady appeared to believe his team had one more chance (having confused third down with fourth).

In a recent social media post, he offered some humorous narration of the moment.

“I don’t think I’ve ever been as confused as I am in this moment right here,” Brady admitted as he rewatched the footage.

“Look at that face,” Brady joked, referencing what would become an internet meme.

Trivia: Who holds the Red Sox pitching record for most batters hit all-time?

Chris Hogan’s lacrosse debut will come at Gillette Stadium: The former Patriots receiver made the Cannons LC roster of the Premier Lacrosse League. The league’s season gets underway on Friday at 7 p.m.

On this day: In 1997, Brazilian left back Roberto Carlos scored one of the more impressive free kicks in history. Hitting the ball perfectly, Carlos managed to bend it back from its assumed trajectory (well wide of the goal), swerving it off the post and into the net.

The replays are worth watching for a full appreciation of an iconic goal:

Daily highlight: Jack Sock went behind the back to help find a winner in straight sets on Wednesday against Roberto Quiroz in the Little Rock Open. 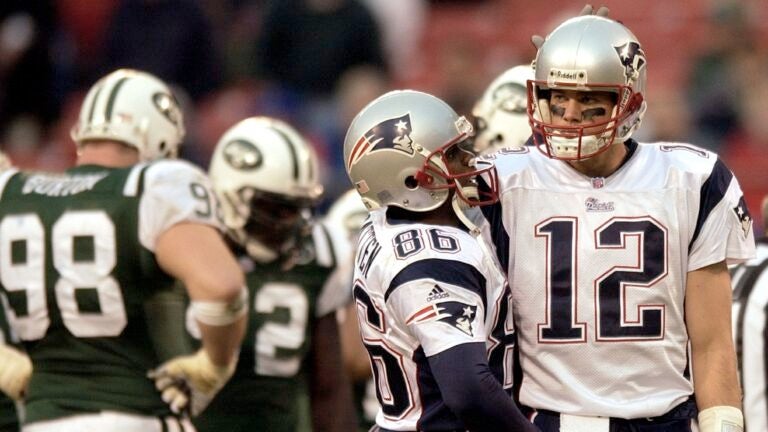 A close look at Mac Jones’s season reveals an eerie resemblance to Tom Brady, circa 2001