Will Middlebrooks only has three strikeouts this spring. Spring stats are by in large meaningless, but this one is pretty meaningful, no?
— Chris

I think it is, Chris. We know Middlebrooks has one very valuable skill at the least — he can hit for power against major league pitching. Thirty-two homers in 660 career plate appearances is impressive by any measure … yet we also know it’s also misleading.

He didn’t put up those numbers over one season, or with any consistency. He put them up as bookends to a stretch in which he struggled with many more lows than highs. The presumed No. 5 or 6 hitting entering 2013, he batted a Crespoian .201 through May 23, was relegated to Pawtucket, went 4 for 29 upon a seven-game recall in June, got his act together upon a return McCoy, then came up and raked in August (.322/.406/.475) before cooling off somewhat in September and losing his job to Xander Bogaerts in the postseason.

Bogaerts, four younger, seized the job in part because — well, because he has a chance to be a generational player. They tend to do those sort of things such as stealing the October spotlight just because they can. But Bogaerts also seized the job because he learned to do something Middlebrooks still struggles with — he resisted the temptation to hack at borderline pitches.

You wonder if Middlebrooks learned a lesson watching the younger player thrive in the spot that was supposed to be his. There has been progress with Middlebrooks; a year ago, he didn’t even believe he needed to change his approach.

After his humbling sophomore season — one in which he still contributed 17 homers — he realized change was necessary. He deserves credit for hat much at least, and the adjusted mind-set (and improved vision, perhaps) has manifested itself on the field in Fort Myers — he hit .353/.389/.667 in 51 plate appearances with just those three strikeouts. I’d like to have seen a few more walks worked in — he had just two — but as far as small sample sizes go, it’s as encouraging as one could expect.

Care to revise your tank-fest comments based on Danny Ainge’s recent statements about the draft?
— FCM

I do not like your tone, mister, if you are a mister. Not sure what needs revising. I’ve been right on about what their approach would and should be this season — play hard, trade off veterans who won’t be part of their future, and accumulate as many ping-pong balls as possible.

That’s what happened, and it really has been kind of fun as far as lousy seasons go. Brad Stevens is a terrific coach who sets them up beautifully for the future. Jared Sullinger and Kelly Olynyk look like quality rotation players at worst. The knee injury seems to have had little effect on Rajon Rondo. Kris Humphries has been the opposite of what we’re told he was. And they’re still fifth-worst in the standing, with an 8.8 percent shot at the top pick. It’s all worked out for the best.

As far as Ainge’s comment about this draft being overrated, while there may be some truth in his words regarding certain prospects — Andrew Wiggins isn’t as polished as he was expected to be, though he’s tantalizing at times — there’s also a strong suspicion around the NBA that he’s bluffing. Ainge knows exactly who he wants. As my colleague Gary Washburn put it, “Ainge would do cartwheels in front of the Garden in his BYU jersey if he could get Jabari Parker.”

Mike Trout becomes the first player to make $40 mil a year when he becomes free agent eligible (which I think is in 2018). As absurd as that sounds, is it really that absurd given what’s happened with Cano and Cabrera’s recent contracts?
— Dan

Nope. Not absurd at all. It’ll probably be way more than $40 million per season. if he keeps up his current modern-day Willie Mays performance. In the new deal, which takes him through 2020 and age 29, he actually will make $33.5 million per season in each of the final three years. So $40 million wouldn’t be that much of a raise. And that’s seven seasons away — the new deal begins in 2015. To put it another way: If he’s the same player then he is now, $40 million will be a steal. According to FanGraphs, Trout was worth $44.9 million in ’12, and $52.1 million last year. Start the bidding at $50 million per. Hopefully the Sox will be in on the building even though it’s inevitable that they’ll have three-time MVP Xander Bogaerts and four-time home-run champ Giancarlo Stanton signed to lucrative long-term deals then.

With LeGarrette Blount and Maurice Jones-Drew now signed elsewhere, is there a good FA back still out there or draft?
— P

Blount would have been nice to have had back. But he’s also evidence that a good running back can be found at a bargain rate. Jones-Drew? Meh. He averaged 3.4 yards per carry last year. Typical Raiders signing. I imagine they’ll pick up someone in the draft rather than in free agency — there’s not much remaining unless you like Andre Brown or LaRod Stephens-Howling. And it’s not as if they’re in bad shape there anyway with Stevan Ridley and Shane Vereen.

Amen. It makes you proud to see Boston people put their arms around each other and become a tight-knit community when there is tragedy. If only we didn’t have to do it so often lately. 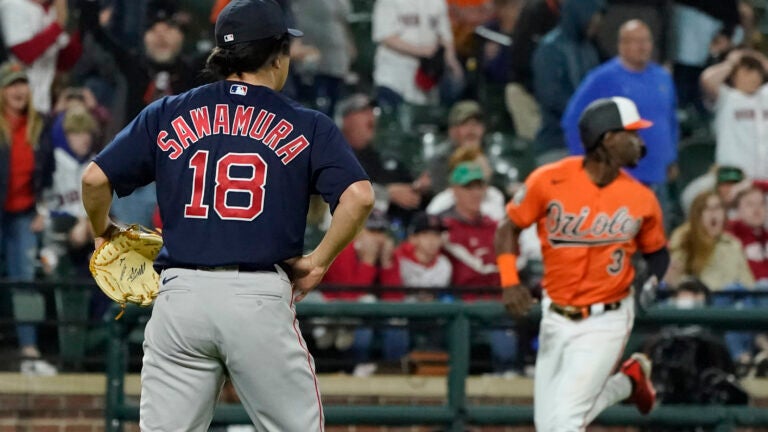