When considering the greatest single-season, single-team drafts in NFL history, the natural tendency is to first appreciate the totality of talent acquired.

The 1974 Steelers (four Hall of Famers, including Jack Lambert and Lynn Swann) and the 1986 Niners (Charles Haley, John Taylor and six other valuable contributors) are the consensus best drafts in modern league history for that reason.

But there have been some drafts that rate among the best simply because of two great picks — the 1965 Bears (Dick Butkus, Gale Sayers) or the 1996 Ravens (Jonathan Ogden, Ray Lewis).

And then there are the drafts that were made by just a single excellent or fortuitous pick. As Bill Barnwell pointed out on Grantland recently, pro-football-reference’s Career Approximate Value method (I’ll spare you the calculus) rates the 1975 Bears draft ahead of the ’74 Steelers Hall of Fame fiesta. Why? One word: Sweetness.
Recognizing that Single Superstar Theory, the best draft in Patriots is pretty damn obvious.

It’s the one in which they picked Tom Brady, goof.
Yes, even though he was the 199th pick, a relative equal to Tim Rattay in the Patriots braintrust’s collective minds, and selected only after they’d spent picks on the likes of Adrian Klemm, Dave Stachelski, and Jeff Marriott. Hey, there’s nothing wrong with being lucky and good.
So, yeah, the 2000 draft is the obvious choice as the best in franchise lore for that one history-altering choice. I didn’t always recognize this, though. A few years ago, when I was editing those late, I-thought-great Patriots Football Annuals for Maple Street Press, I rated the 10 best and five worst drafts in the franchise’s annals. I had the 2000 draft No. 2. then.
But time and an apparent upgrade on common sense has led to reconsideration and revision. Here, then, are the five best drafts in Patriots history excluding the one in which they found their franchise quarterback 16 picks after the Cleveland Browns chose Spergon Wynn.
Who knows, with a little luck, maybe this year’s draft will someday make a case for a spot on this list.

5. 1976
Best picks: CB Mike Haynes (1st round, fifth overall), C/G Pete Brock (1, 12), S Tim Fox (1, 21).
Postscript: For my money, Haynes is the best cornerback in NFL history, Deion Sanders included. It’s only too bad his time with the Patriots didn’t last longer — a contract dispute led to a trade to the Raiders in November 1983. Fox was perhaps the hardest-hitting safety the Patriots had until Rodney Harrison came along. Brock was a dependable, versatile lineman for 12 seasons.
Said at the time: “In the Patriots’ grading system, Haynes was the best cornerback in the nation, Fox was the best safety, Brock was the finest offensive lineman to come out of the draft in the past eight years, and [second-rounder Ike] Forte was the third-best all-around running back — ranking just behind Chuck Muncie and Joe Washington, who went third and fourth in the entire showdown.” — Will McDonough, “Patriots Go After Value,” April 9, 1976
* * *

4. 1982
Best picks: LB Andre Tippett (2, 41), WR Cedric Jones (3, 56), LB Clayton Weishuhn (3, 60), S Fred Marion (5, 112).
Postscript: The Patriots figured they were acquiring the future anchor of their defense in the ’82 draft, and they did. It just happened to be that it was Tippett, the Hall of Fame outside linebacker, and not the player they took with the No. 1 overall selection, Texas defensive end Ken Sims. While Sims managed just 17 sacks in an eight-year career that succumbed to off-the-field issues and on-the-field indifference, the Patriots made up for his flop by stealing Tippett and longtime starting safety Fred Marion. And don’t forget Weishuhn. He was on his way to becoming the league’s next great inside linebacker when his career was derailed by knee problems.
Said at the time: “[Coach Ron] Meyer and [general manager Dick] Steinberg Meyer and Steinberg both feel the Patriots came away with four first- round-caliber choices: Sims, [Lester] Williams, {Robert] Weathers and Tippett. “We had them rated as first-rounders on our board,” said Meyer. With the exception of Tippett, they were rated first-round choices by all three of the major scouting combines – BLESTO, United and QUADRA. Tippett was thought of more as a high second-round choice, which is where he went. — Will McDonough, “Patriots Deal For New Defense,” April 28, 1982
* * *

3. 1977
Best picks:CB Raymond Clayborn (1, 16), WR Stanley Morgan (1, 25), RB Horace Ivory (2, 44), TE Don Hasselbeck (2, 52), T Brad Benson (8, 219).
Postscript: Talk about improving the team speed. Clayborn and Morgan, chosen nine picks apart in that first round, are two of the most electrifying players ever to wear Pat Patriot or Flying Elvis on their helmet. They combined to play 26 seasons in New England, each departing after the ’89 season with their names all over the Patriots record books. Morgan averaged 19.4 yards per catch on 534 receptions as a Patriot, while Clayborn is tied with Ty Law for the franchise interceptions record (36).
Said at the time: “In this case,” [Patriots coach Chuck] Fairbanks said, “I think we have drafted both quality that fits a prerequisite and a player [Clayborn] that matches to an area where we could use strengthening.” — Lesley Visser, “Patriots Get Speed In 1st Round”, May 4, 1977.
* * *

2. 1973
Best picks: G John Hannah (1, 4), RB Sam Cunningham (1,11), WR Darryl Stingley (1, 19), LB Brad Dusek (3, 56), NT Ray “Sugar Bear” Hamilton (14, 342)
Postscript: Hannah is the best guard in NFL history. Cunningham is the franchise’s all-time leading rusher (5,453 yards). Stingley was a player and person of great promise who was paralyzed by a Jack Tatum cheap shot in August 1978. He died in 2007 at age 55.
Said at the time: “Our first three draft choices on the first round could become outstanding football players,” Fairbanks said. “We think now that John Hannah, Sam Cunningham, and Darryl Stingley will all be able to contribute to our offense this fall. The middle rounds of our draft… we might be get a couple players out of them. I’ll have to wait on that.” — Will McDonough, “Pats Top 3 Could Be Great — Fairbanks,” May 3, 1973.
* * *

1. 1995
Best picks: CB Ty Law (1, 23), LB Ted Johnson (2, 57), RB Curtis Martin (3, 74), C Dave Wohlabaugh (4, 112)
Postscript: Martin, who unfortunately was pilfered away by the Jets after just three seasons, is already enshrined in Canton. Law, the best big-game cornerback of his era, should eventually join him. Johnson was a ferocious run-stopper for a number of seasons.
Said at the time: “Consensus on the Patriots is that they will have had a good draft if Jimmy Hitchcock and Curtis Martin, both of whom have had injury problems, turn out to be players.” — Will McDonough, “Feeling Out NFL Draft Is No Breeze,” April 25, 1995. 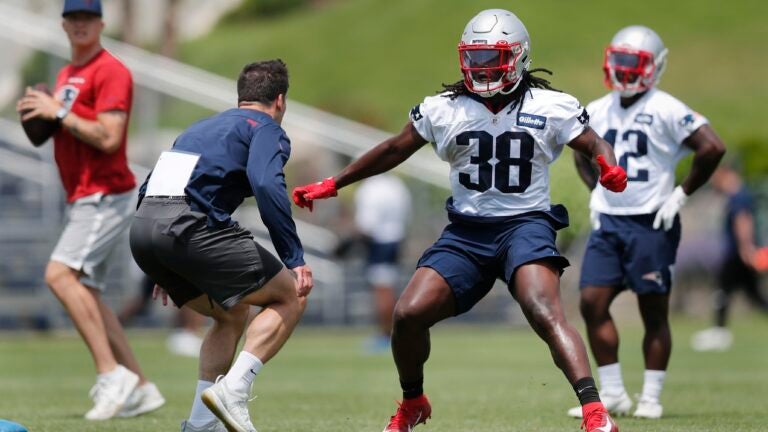