We can only hope it goes seven.

If the Red Sox’ all-too-easy sweep of the Angels in last week’s ALDS taught us anything as far as this new-fangled, at-your-leisure playoff schedule is concerned, it is that too much time isn’t necessarily a good thing.

Sure, Josh Beckett is rested and ready to go on eight days rest in tonight’s Game 1 of the ALCS vs. a similarly rested C.C. Sabathia (seven days’ rest) and the Indians. Yes, the Sox and Indians have had the luxury of an extra few days to heal the bruises, nicks, and lethargy that late-night baseball of October can bring.

But these four days have given us hype to reach Super Bowl proportions. And how much do we all love those idiotic two weeks leading up to a three-hour window?

Don’t get me wrong, anytime there’s more dead air space for even more of those lame bets between mayors is fine by me. My personal favorite news story is when the cameras line themselves up at Twins Souvenir Shop to witness the yahoos buying their new Sox caps and jackets. I think it was Channel 7 that profiled one such guy, a former Twins fan — as of Sunday — who was buying his new paraphernalia after becoming a Sox fan. The day before. I mean, who better to discuss the feeling and emotion of a region than a guy who pledged his allegiance after the ALDS?

Channel 7’s “Meet the Indians” wasn’t such a bad touch — if this were a remedial crash course in MLB 2007. It’s always special when the general news crews get involved in local sports coverage, which always has the sports guys shaking their heads and gritting their teeth. Nobody is asking Tom Caron to cover the Massachusetts primaries, so why in the world does Jon Keller have to tell me what he thinks about the ALCS?

I’m sad to say even the venerable “Chronicle” got into the swing of things last night with one of those always painful comparisons of cities. You know, Boston has “Cheers.” Cleveland has “The Drew Carey Show.” Advantage: Let’s face it; we all lose with these things. Somewhere Nick Bakay is crying himself to sleep.

Always worth it are the “On the streets” series picks too, when a camera sets up shop on the corner of Yawkey and Brookline, soliciting fan opinions — sorry, hardcore analysis — on why it’ll be Cleveland or Boston heading to the World Series. Thank goodness Games 1 and 2 are both on the weekend so we don’t have to yet endure those “Ways to stay awake the day after a playoff game” stories that we’re sure to get come Tuesday. And of course, get ready for the “How big a Red Sox fan are you?” features that will plague the dial. Cue “Sweet Caroline.” “Tessie” is a go. Maybe we’ll even get some ridiculous piece about colorful security tags at the ballpark.

In any case, let’s put an end the hype. Thank God they’re playing baseball tonight — potentially phenomenally good baseball at that, with two evenly matched teams fighting for the right to play the Colorado Rockies (Go ahead, pick against them) in the World Series. In fact, maybe we should feel a bit denied if this series doesn’t go seven games. Who wants a four-game sweep when there’s the possibility of a classic on our dockets the next week-plus?

Pray it goes the distance. For more than one reason.

Our roundup of how writers around the country are picking the Red Sox-Indians playoff series: 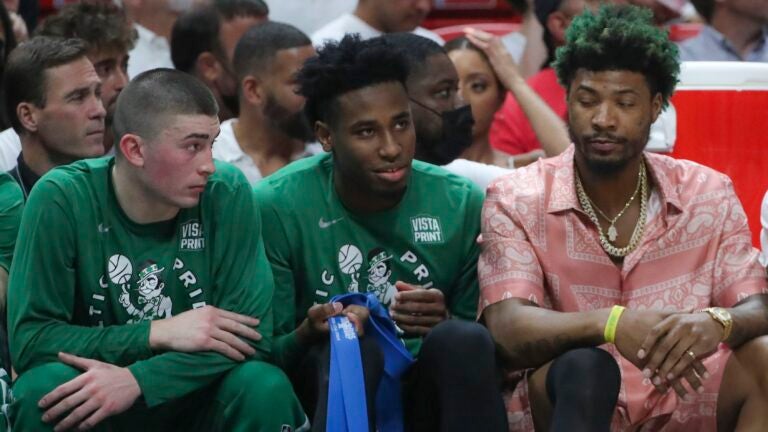 If any Celtics fans didn't respect the Heat going into this series, they should now