First off, Colin Campbell is an idiot.

After all, Carolina Hurricanes forward Scott Walker will roam the ice tonight in Raleigh, N.C. (a dateline that still seems inexplicable a decade-plus later, until you recall the names of the tool sheds running the NHL). Or, maybe Scott Walker is the idiot for wanting to be on the ice in the first place.

Tonight, the Boston Bruins look to stave off playoff elimination at the hands of the Former Whale in a Game 6 that could potentially feature enough board checks, icy stares, and five-minute majors to qualify as a re-make of “The Running Man.” Starring Scott Walker as “Plain Zero.”

It’s difficult to boast that the Hurricanes “awoke the sleeping bear” Sunday night in getting embarrassed by the Bruins, a 4-0 shutout that featured Walker’s “sucker-punch” on B’s defenseman Aaron Ward in the game’s waning minutes. Under the rules of the NHL, such an action carries an automatic suspension. But the NHL disciplinarian also happens to be Colin Campbell, whom we’ve already established as an idiot.

Still, this one was pretty cut and dry, whether or not you want to debate Walker’s haymaker as cheap or legal, or you want to join Bob McKenzie in blaming Ward for not being “ready.” Regardless, NHL Rule 47.22 states: “A player or goalkeeper who is deemed to be the instigator of an altercation in the final five (5) minutes of regulation time or at anytime in overtime, shall automatically be suspended for one game.”
I suppose, technically, Marc Savard could land an empty-netter in the final minute of play, sparking a celebration that gets the Hurricanes players ticked off, starting a fight behind the net and we’d have to blame Savard for scoring the goal in the first place. Suspension for Savard. Such a scenario makes no sense, but neither does this latest ruling by Colin Campbell.
Walker’s excuse was that Ward said “something” that made him believe he was in an altercation, thus he wasn’t the instigator. He had to have relayed this story over the phone to Colin Campbell, who patched Bob Watson in on the conference call for his own sage advice on the subject.
Walker, who made $2.5 million this season, was fined $2,500, and told by the NHL powers that be to go along his merry way. As Toronto Star columnist Damien Cox points out, that’s “the equivalent of $50 to a fellow making $50,000 a year.” That’s like a parking ticket to you and me.
“Scott probably has sore knuckles,” joked Hurricanes coach – and apparent Lisa Loeb fanatic – Paul Maurice after the incident on Sunday. No fine.
In the Bruins’ last playoff series against Montreal, Colin Campbell levied a one-game suspension on Milan Lucic you may recall, one warranted when the Bruins forward crosschecked Maxim Lapierre. He might have suspended Mike Komisarek for his Game 4 altercation with Lucic but oddly enough, the former would probably have a tough time serving it at whatever Long Island golf course he’s currently playing.
Then again, he probably wouldn’t have. Colin Campbell’s punishment docket is about as inconsistent as this season of “24,” and frankly, just as embarrassing. (Unless you really needed another Kim Bauer in peril story line. Why not just have the cougar roam the airport?)
What’s wrong today is fine on Thursday, apparently depending on whatever mood Colin Campbell is in. And I think we can all assume the man had a pretty darned good weekend.
But it’s no real surprise. After all, the man is an idiot.
What all this means for the Bruins looking toward tonight is all up in the air. Some think that the team will collectively rise up to the challenge and force a Game 7, spurred on by the anger and frustration that has boiled over from Game 5. Others fear that it’s a recipe for disaster, the Bruins poised to show their undisciplined frustration in a must-win game where they can hardly afford repeated shorthanded shifts on the ice.
The sight of Walker, his sore knuckles, Jussi Jokinen, and the huge Buddy Holly fan behind the bench could collectively either be a major rallying cry or a huge detriment to how the Bruins compose themselves. For Boston fans, this is all great because nobody could really figure out how to hate the team formerly from Hartford in the first place. Now, the ammo is flying.
You can either thank or blame Colin Campbell for some of that. For the disciplinarian’s decision either just helped drive the Bruins to the conference finals, or he’s doomed them for an early exit.
If it’s the former, he’ll soon be a genius in these parts. 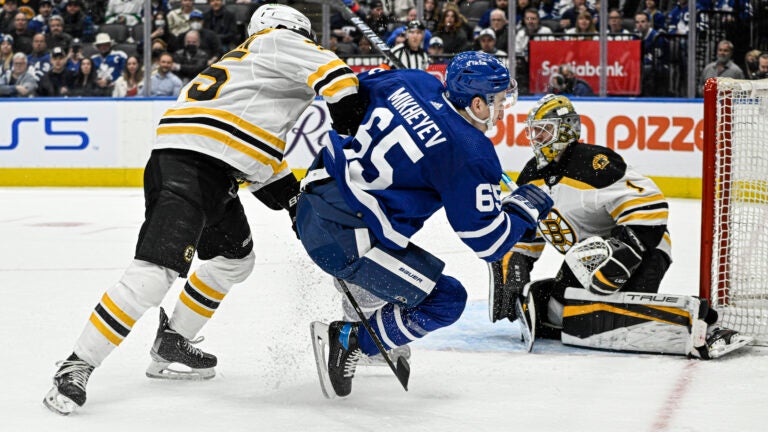