NORTON — He’s the distinctive looking guy (friends affectionately refer to him as “Shrek’’) with the indistinguishable last name. Louis Oosthuizen doesn’t roll off the tongue like Tiger Woods or Phil Mickelson. It ties the tongue into a double Windsor knot.

The New York Times golf blog had a post earlier this year that detailed there are three legitimate ways to pronounce the South African’s surname — “Oo-est-hayzen,’’ “West-hayzen,’’ and Oost-hayzen.’’ The mispronunciations are almost infinite.

Something more than the pronunciation of Oosthuizen’s last name seems to get lost in translation in the United States. His Afrikaans dialect becomes Afri-can’t, as in can’t quite win. Oosthuizen, who has won 10 tournaments in his professional career, including the 2010 British Open, is still searching for his first PGA Tour win on American soil. He is 0 for 43 after finishing second Monday at the Deutsche Bank Championship.

Despite entering the final round with a three-shot lead at 19-under par, Oosthuizen was the bridesmaid once more, shooting an even-par 71 to finish one stroke behind winner Rory McIlroy, golf’s new It Boy (20 under).

This was one nice guy who deserved to finish first, especially after a shaky front nine that cost him his lead. Oosthuizen could have made like the Red Sox and put first-class postage on his day, but he fought back on the back nine with birdies on No. 13 and No. 15 to force McIlroy to sweat it out to the final stroke. The victory wasn’t secure for McIlroy, who fired a final-round 67, until Oosthuizen missed a 15-foot birdie putt on the 18th to the right.

But it was the par putt he missed on the previous hole that loomed large (more on that later).

It was Oosthuizen’s second second-place finish of the season. He was the runner-up at the Masters, losing a playoff to Bubba Watson, who hit a miracle shot on the second playoff hole to set up the win. Oosthuizen also placed third at the Shell Houston Open after entering the final round with a two-shot lead.

America is a country that thrives on capitalism, and Oosthuizen has benefitted from that — he’s 13th on the tour’s money list ($3.21 million). But he just can’t seem to capitalize on his opportunities to win in the States.

You would think that after yet another close call this season Oosthuizen would have been bitter, but instead he couldn’t have been more gracious or magnanimous in defeat, lauding the talents of McIlroy and saying overall he had a great week in Norton. Oosthuizen might be tough to pronounce, but it can be spelled C-L-A-S-S-Y.

“I felt I hung in there on the back nine. Rory was three shots ahead of me [after 12], and I felt I did good to put myself within one after that,’’ said Oosthuizen. “I’m a bit disappointed about the bogey on 17. I’m second for the week. I played really well. Rory really played so well the front nine. He made birdies and was pushing. He’s a great player.’’

Oosthuizen had put himself in position for his first win on this side of the Atlantic Ocean with a scintillating 8-under 63 on Sunday that included a tournament-record run of seven consecutive birdies and a scorching 29 on the front side of the TPC Boston course. Whispers of 59 filled the course like hushed church chatter on Sunday. He had to settle for the lowest 54-hole score in the history of the Deutsche Bank (194).

But it was the same front nine that was the 29-year-old’s undoing on Monday, as he went out in 1-over 37. His lead had completely evaporated by the sixth hole.

Oosthuizen was undone by a disastrous double bogey at the par-4 fifth hole. His tee shot on the fifth went farther left than Keith Olbermann. He was forced to take a penalty stroke, setting up the double bogey that made him the co-leader at 18 under with McIlroy, who took the solo lead on the next hole with a birdie.

“Shooting 1 over today felt like I shot a 47 compared to [Sunday’s] round,’’ said Oosthuizen. “After the double, I still hit good shots and hit good putts, but just I didn’t make any putts today. I made two good ones on 13 and 15, but I needed to put myself in a better position early on.’’

Adding insult to injury, Oosthuizen revealed after the final round that he had tweaked a muscle in his upper chest/shoulder on that wayward drive on No. 5 that affected him the rest of the back nine.

“It was strange because it was just on that shot, and then I started thinking about it and felt it a little bit,’’ he said.

The only thing Oosthuizen and McIlroy were feeling as they played the final two holes was pressure.

The 17th loomed as the revisionist Rubicon for Oosthuizen. McIlroy settled for a bogey after he airmailed his second shot, a greenside chip, into the rough. Oosthuizen had a chance to take the lead with a birdie or send the festivities to the 18th deadlocked at 20 under, but he misjudged the wind on his approach shot from 140 yards and went into the right rough. He still had a chance for a par, but two-putted from 11 feet, letting McIlroy off the hook.

“I think Rory’s putt would have put way more pressure on it if I would have already had a 4 or maybe a 3,’’ said Oosthuizen. “I needed to give myself a birdie putt on 17.’’

He has the complete collection, except for one, The One.

Here’s hoping he gets it.

Oosthuizen might be tough to pronounce, but he’s easy to root for. 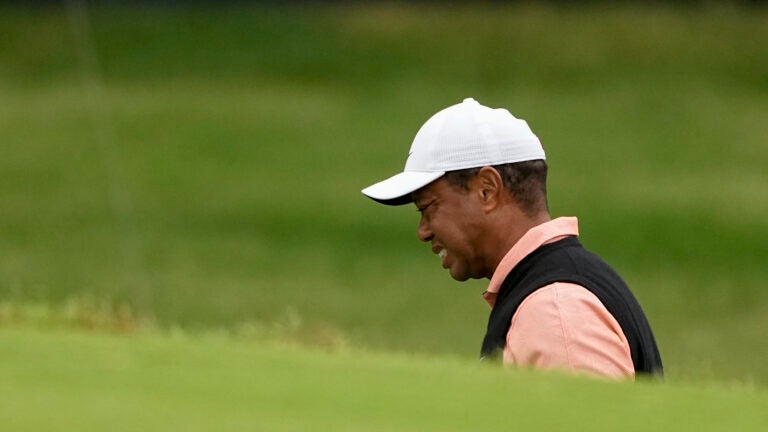