At 18-under 266, Woods also pulled off something he hadn’t done anywhere since the 2009 BMW Championship: Break 70 in all four rounds of a PGA Tour event. His 64-68-68-66 was two shots higher than winner Rory McIlroy, but it gave Woods plenty to build on.

“My game is starting to come around. I’m pleased with the progress I made this week and really pleased with the way I rolled it,’’ Woods said. “I hit so many good putts all week long, so that’s a positive.’’

“I’ve won fewer tournaments than Sam Snead has. Obviously he was in a different era,’’ Woods said. “We happened to time it up right and happened to play well when the purses really had a nice spike up.’’

Woods began the final round six shots behind Louis Oosthuizen’s lead, but with McIlroy getting off to a fast start, he could never get closer than two during the final round. He had a number in mind, though.

It was quite an eventful week for Charl Schwartzel, who needed a decent finish to secure a spot in the third playoff event, this week’s BMW Championship. He tied for 47th here and qualified for it, but might not be able to play because of injury.

Schwartzel missed more than a month this summer after tearing a rib muscle at the US Open, and has had a recurrence of the injury that causes him pain when swinging a golf club.

After his final-round 71 — a score that allowed him to finish 68th on the points list and move on — Schwartzel pegged his availability for the BMW at 50-50.

He wouldn’t have sweated out the top 70 so much if it wasn’t for a wild Sunday. The shaft in Schwartzel’s driver, which he’s been using two years, snapped on the sixth hole when his caddie picked up the golf bag. A replacement was found and brought out to Schwartzel, as is permitted, but it was a driver used by Carl Pettersson, and was 4 inches longer and 3½ degrees of loft different. The two times he used it on Sunday, he hit low, hard hooks, one of which led to a double bogey on No. 14.

Fast forward to the 18th, when Schwartzel four-putted from 4 feet, missing the third putt when he carelessly played it lefthanded. It gave him a double-bogey 7.

“That was enough for me to snap. You get pushed that far, and not any further,’’ Schwartzel said. “Things happen quickly, you know. If I tapped it back in it would have been no fuss, but I tapped it and missed it a few times. The rest was pretty much a blur.’’

Schwartzel said if he skips the BMW, he’ll likely sit at least a month, hopeful of returning for the European Tour’s Dunhill Links Championship in early October.

“It was great to be able to play on the weekend in front of my home fans for the first time,’’ said Bradley, a Hopkinton High School graduate and Vermont native who missed the cut in his Deutsche Bank Championship debut a year ago.

“I’m very proud of the way I came back and was able to make a great week out of nothing.’’

Bradley actually improved his spot on the points list, up one to 12th.

For the first time in tournament history, the par-5 18th did not play as the easiest. The average of 4.644 strokes was slightly higher than last year’s 4.500 average, and the 14 eagles there for the week were the fewest since only four were made in 2006. The 18th was only second-easiest. The easiest hole was the par-4 fourth, with a 3.581 stroke average . . . Ian Poulter tied for 47th after shooting a 70, and earned $21,520 for his effort. He’ll likely leave a little of that behind, after being issued a speeding ticket while driving his cream-colored Ferrari to the course Monday morning from Providence, where he was staying for the week . . . In the John D. Mineck DBC Junior Cup, held in conjunction with the tournament and played over the weekend at Boston Golf Club in Hingham, Team New England defeated Team USA, 32-28. Connor Greenleaf (Windham, N.H.) and Jake Shuman (Needham) won 5 out of a possible 6 points in their two matches to lead the 20-member local team . . . The Red Sox Legends & Friends Pro-Am, which previously had been on the Tuesday of tournament week, is being held the day after this year. Fred Lynn, Jim Rice, Carlton Fisk, Dwight Evans, and Ray Bourque are among the celebrities expected to participate, with proceeds from the event benefiting the Red Sox Foundation. The pro-am is closed to the public. 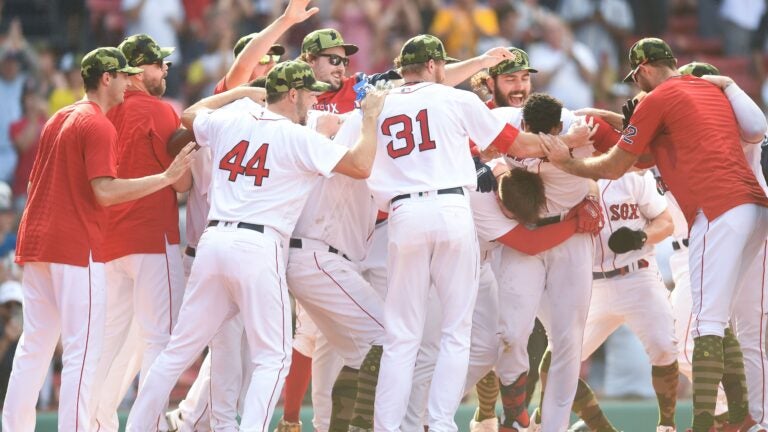