ST. PETERSBURG, Fla. — Joe Maddon was too busy acknowledging what the Red Sox had just done to his team to acknowledge the chants ricocheting and reverberating though the bowels of Tropicana Field.

In the aftermath of the Red Sox’ exhausting, exhilarating, series-clinching 3-1 victory over the Rays in Game 4 of the American League Division Series Tuesday night, Maddon graciously offered a verbal tip of his cap to virtually every Red Sox player who saw or delivered a pitch.

But as he spoke, his words were accompanied by an unmistakable chant, rising and rhythmic, in the champagne-scented hallway:

Not only had the Red Sox made themselves at home in this goofy dome. So too had their fans, and they weren’t going back to Boston without bidding a proper farewell.

Now they will leave this pinball machine of a ballpark and the rival Rays behind until next season, resting up and awaiting their next assignment. They will face the winner of Thursday’s decisive fifth game of the Athletics-Tigers series in the ALCS, where they’ll be making their fifth appearance in 11 years.

The Sox formally wrapped up the victory and the series when Koji Uehara, the exceptional closer who gave up a stunning walk-off homer to Rays catcher Jose Lobaton in Game 3, found the you-can’t-touch-this form that had made him one of the most essential members of this deep and relentless roster.

Evan Longoria, the Rays’ most dangerous hitter, accounted for the final out of his team’s season, checking his swing on a strike three that darted south at the last fraction of a second. It was a fitting final scene, one more fearsome hitter flailing futilely against Uehara.

But it’s not just about the last out. It’s how they got there. The Red Sox earned the victory in so many ways, and in their usual ways: with contributions from so many players.

“We came out tonight, we grinded through at-bats, we came back from a one-run deficit,” said reliever Craig Breslow. “And that’s been the trend all season. On any given night it could be a different guy who contributes, and tonight I would say it was 25 guys who contributed.”

Of those 25 — maybe that’s only a slight exaggeration — let’s begin with the starting pitcher, Jake Peavy. His brilliant if brief performance — 5.2 innings, 5 hits, 1 run — is most liable to be lost in all that came after, and that just wouldn’t be right.

“It would be a shame if Jake’s start was overlooked,” said Breslow. “He was in total control, dominated at-bats. Got ahead, was unbelievably efficient. … We knew we were going to get everything he had.”

Peavy left the game trailing, and he left the game raging, openly infuriated that John Farrell removed him after 74 pitches to bring in lefthander Breslow to face lefty nuisance James Loney.

Maybe Peavy didn’t recognize it in the heat of the competition, maybe he never will. But pulling him was the correct decision before the outcome was revealed: Loney was 10 for 31 with 2 homers in his career against Peavy. And it was justified further when Breslow struck him out.

But listen to Breslow: do not forget what Peavy did before his departure. This performance, in this scenario, is exactly why Ben Cherington traded defensive whiz Jose Iglesias to the Tigers for him in late July. Peavy delivered, big-time. All referendums on whether the deal was the right one for the Red Sox should be retired for good.

For a time, it seemed like the outcome would be a matter of two line drives in the vicinity of first base.

The Red Sox squandered a delicious opportunity to give Peavy a lead in the second inning. Daniel Nava followed no-out walks to David Ortiz and Mike Napoli with a sharp single to left off Rays starter Jeremy Hellickson.

Maddon, manipulating his team with his usual unconventionality and yet out of utter urgency, pulled Hellickson, turning the ball over to Jamey Wright.

Wright might not have seemed like the most likely pitcher to escape such a jam — he’s 38 years old, a veteran of 10 teams, a first-round pick the same year as Jason Varitek and Trot Nixon, and the owner of a career 4.82 ERA — but escape it he did, thanks to the long reach and quick thinking of James Loney.

After Wright struck out Jarrod Saltalamacchia on a backdoor curve, Stephen Drew hit a rocket to first base that the 6-foot-3-inch Loney leaped to snare. After calculating that he wasn’t going to beat Nava back to first base, Loney alertly threw to second to double up Napoli. Inning over. Threat over. Cue the cowbells.

Wright was the second of nine pitchers Maddon would use in the game, none more than two innings. Had the game gone to extras, ace David Price would have pitched the 10th, presumably with Dewon Brazelton and Ryan Rupe taking the innings beyond.

Red Sox fans can joke about the Desperation By Committee approach now, but it did work through six innings, and after Maddon’s curious/deft managing paid off in Game 3, it was getting tempting to wonder whether he’d been hiding a strategically placed horseshoe somewhere.

The Rays seized a 1-0 lead in the sixth, with David DeJesus plating Yunel Escobar with an RBI single over the drawn-in Red Sox infield. Had first baseman Mike Napoli been at his usual station, he might have made a run-saving play similar to Loney’s four innings earlier.

But there was little time to lament, in part due to some bold managing by Farrell. With hard-throwing lefty Jake McGee taking the mound for the Rays, the Red Sox manager sent Jonny Gomes up to hit for Saltalamacchia. Gomes flew to center field, leaving the Red Sox manager to go back to his bench, and in a most unexpected way.

For much of September, Farrell’s reluctance to utilize super-prospect Xander Bogaerts in place of dependable but southpaw-allergic Stephen Drew against lefthanded pitching was puzzling. It was downright frustrating in Game 3, when Drew popped out in key spots against lefties Jake McGee and Alex Torres. So who saw it coming when Farrell sent up the 21-year-old with 50 regular-season plate appearances to his credit to face McGee in the seventh.

The decision proved crucial, and for those who wanted to see Bogaerts in such a spot long ago, affirming. He drew a walk against McGee, eventually scoring the Red Sox’ first run on a wild pitch with Shane Victorino at the plate. Victorino would plate the go-ahead run by legging out a 17-hopper to short as Jacoby Ellsbury came home.

Bogaerts contributed another terrific plate appearance in the ninth, working a walk against Rays closer Fernando Rodney and scoring the third and final Sox run on a Dustin Pedroia sacrifice fly.

When Farrell was asked why he decided to give Bogaerts an opportunity Tuesday, his reply was one straight out of Bill Parcells’s Book of Quotes:

Well, I reserve the right to change my mind,” Farrell said. “Given some of the struggles that Stephen has had, you know, we had talked about this leading into the series and I felt like at the moment as tough as lefthanders have been on Stephen, I felt like we had to try something different.

“And for a young guy that’s been sitting for quite a while, obviously Xander showed tremendous poise and almost ice in his veins and scored two runs of the three we had tonight. But in the moment we felt like we had to get something started.”

Now it was about getting to the finish. With the Red Sox going from one run down to a run up in the eventful sixth, the feeling that time and outs were running low suddenly gave way to another vibe: You mean there are still three innings left? How are they going to get to Koji?

The answer: Some late-inning bullpen dominance that matched everything the Rays ‘pen accomplished in the early innings. Breslow, exceptional all season and unsung nationally, was superb again, striking out four in 1.2 innings.

Junichi Tazawa came on in the eighth to strike out pinch-hitter Matt Joyce with a runner on and one out, then Uehara took care of the final four outs with little suspense.

Twenty minutes or so after Uehara leaped into catcher David Ross’s arms in celebration, the manager of the team they had just vanquished offered his admiration while chanting Red Sox fans provided the backup vocals.

“They have all that stuff going on,” said Maddon, after praising Jacoby Ellsbury, Shane Victorino, and a half-dozen other lineup regulars by name. “They have a wonderful bullpen. They’re just good, man. They’re good. They’re the reason we’re sitting here not winning right now. They beat us all season. They beat us in a 5-game series. I’ve got to give them credit.” 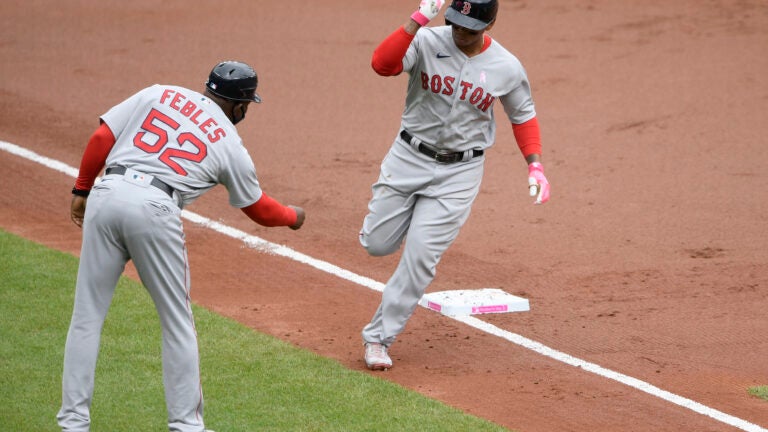 'It’s you guys that don’t believe in us': Rafael Devers, Red Sox enjoying themselves amidst MLB-leading start