I don’t consider this feeding the trolls.

I consider it feeding the trolls to you.

Have at it, guys. RT @recDNA: @GlobeChadFinn JBJ sucks. WE need an outfielder who can hit.

OK, maybe that was kind of a mean reply, at least by my usual charming and open-minded standards.

[I’ll pause here while you pick yourself up from the floor.]

But your response to the suggestion that Jackie Bradley Jr. is something less than a plausible solution to the Red Sox’ vacancy in center field? Now that was encouraging.

One example that suitably represents the majority:

The overwhelming majority of you who had at it suggested patience is an approach with the 23-year-old Bradley that will probably be fulfilled. I’m still get used to — and savoring — the idea that patience and the it’s-probably-going-to-be-just-fine mindset is an attribute of New England sports fans these days.

I suppose that’s one of those positive effects of winning three World Series titles in 10 years, a new, admirable part of the collective Red Sox fan identity. So much for what was supposedly lost by winning, right?

I do think this sample is representative of the larger group, that Red Sox fans are comfortable going into the season with Bradley Jr. as Jacoby Ellsbury‘s successor in center field. Call it a common-sense medium.

The pendulum did change direction on Bradley a couple of times last year. A ridiculously torrid spring training earned him a spot on the Opening Day roster and perhaps led to some unreasonable expectations. I still think some good-intentioned folks confused his prospect status with that of Xander Bogaerts, presuming wrongly that Bradley was the one projected to be a franchise player.

After a stellar debut in which he worked three walks against CC Sabathia and Joba Chamberlain, he gradually struggled, and amid the foolish-in-retrospect debate about his service time, he was sent to Pawtucket on April 17. His batting average was .097 in a dozen games. His fine season in Triple A (10 homers, 39 extra-base hits, .842 OPS in 374 plate appearances) included three brief midsummer interludes in Boston. And when he came back when rosters expanded in September, he showed small improvement at the plate, hitting .243/.317/.378 in 41 plate appearances. He finished the season with a .189 batting average and a .617 OPS.

Those numbers don’t exactly suggest the job is his without competition entering spring training, but barring a blockbuster trade or the arrival of a discounted Matt Kemp from the Dodgers, it’s perfectly reasonable to envision him as the starting center fielder and No. 9 hitter March 31 in Baltimore.

“We’re not going to talk about exactly what the team’s going to look like on Opening Day because we don’t have to yet,” said manager John Farrell at the Winter Meetings Monday. “There’s still time and we’re working. We’re going to work through different options. We certainly feel fortunate that Jackie is in our organization and we would feel good if he was playing center field if that’s the way it plays out.”

Remember, his first plate appearance above Double A came that day against Sabathia in Yankee Stadium. Of course he hit some rough spots.

He’s not the first player to struggle in his first taste of big league pitching, and it did become apparent that he had a significant hole — hard stuff down and in — that needed to be addressed. By all accounts he put the work in to make the adjustments. His work-ethic is said to be off the charts.

And the other aspects of his game are more than ready. He knows the strike zone and is an above-average runner, though those who expect him to be a burner in the Ellsbury mode will be disappointed.

Bradley is a better all-around center fielder than Ellsbury right now — he’s not as fast, but he takes better routes and covers as much ground. And he’s the first Red Sox center fielder since — I don’t know, Darren Lewis? Ellis Burks? Dom DiMaggio — to have an above-average throwing arm.

I like the idea of Bradley in center and Shane Victorino in right much better than the idea of Victorino in center and bopper-to-be-acquired-later in right. Victorino played the best right field at Fenway since Dwight Evans, and at 33 and with a recent history of leg injuries, he’s probably not suited to playing center every day anymore.

Bradley is not a dynamic superstar-in-the-making like Bogaerts, or even like what Ellsbury appeared to be when he first sped onto the scene in 2007. He’s one of those players who you like more when you see him everyday, a guy who will do a lot of things well, play with savvy, instinct, and intelligence, and maybe make an All-Star team or three along the way.

Here are a few projections that put what he might do in ’14 into perspective:

Bradley’s career path through the minors (where he has hit .297 with a .404 on-base percentage and an .876 OPS) has been very similar to Ellsbury’s. His glove can carry his bat for now, and chances are his bat will come around. All of those projections would be perfectly acceptable for this season.

We may have overestimated Bradley last spring. It would be a mistake to underestimate him now.

Good thing most of us — most of you — recognize the benefits of the patient approach. 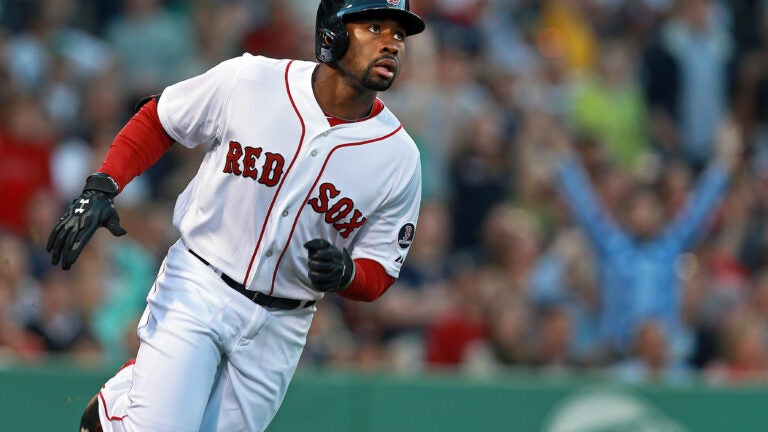