A couple of leftover thoughts from Jacoby Ellsbury‘s formal introduction as a Yankee:

1. As he rattled off all that appealed to him about playing for the Yankees — a dedicated fan base, talented teammates, the chance to win championships, a storied history — my first reaction was this: All he wants there is exactly what he had here.

2. Of course, then you realize he’s omitting the real reason he’s now wearing pinstripes. They offered the most money. Nothing wrong with that. Maybe someday someone will even admit it. I just hope it’s not Mike Trout in five years when the Yankees throw $400 million his way. Randy Levine’s casual comment …

“If Mike Trout was here, I’d recommend the 10-year contract. But for people over 30, I don’t believe it makes sense.” – Randy Levine

… wasn’t tampering. But it wasn’t an accident, either.

3. Ellsbury’s introduction reminded me a lot of Mark Teixeira‘s five years ago, a celebration of acquiring a player of exceptional talent and milquetoast personality, with the specter of Scott Boras hovering above it all. Almost all introductory press conferences are awkward — nothing tops this Bobby V. goofiness — but the Yankee productions feel particularly inauthentic.

4. Joe Girardi is the first manager to refer to Ellsbury as a flower who wasn’t sending a thinly veiled message about how long it was taking him to return from injury.

I understand the fascination with Jabari Parker, Andrew Wiggins, etc…but how many superstars come in to the league, become the centerpiece of a franchise, and win a championship in that initial five-year rookie contract? Other than Dwayne Wade and Tim Duncan, I can’t think of any in recent history. If the Celtics do end up with a top pick, are fans and ownership ready to make that pick and have a long rebuild?
— Mark

It’s not so much about getting someone whose going to make a team an instant championship contender; that’s too much to ask. I mean, your scenario didn’t even happen for Michael Jordan. It did for Magic Johnson and Larry Bird, though both had instantly excellent supporting casts. What it’s about — and by it, I mean getting an elite player out of this year’s draft, whether it’s with the first pick or the sixth — is this: finding that guy who can be the best player on an eventual championship team. This is not a draft where Kenyon Martin is the top pick (or Anthony Bennett, for that matter). There is going to be supreme talent available this year — I’m starting to think Andrew Wiggins is becoming underrated — and the Celtics need that. They have some small pieces on this roster already. They have an excellent young coach. And Danny Ainge drafts better than most. But you need that young franchise-type player to be that centerpiece. And historically, that player is found very early in the draft.

Take on the homeplate collision prohibition by MLB? My feeling was the rule book always had a runner interference rule when a fielder did not have the ball. Hearing some of the bombast regarding the rules and soul of the game being tossed out the window is Fellini-esque.
— Possum

It’s obviously one of the most exciting plays in baseball …

… and I do wonder if the anticipation of a play at the plate won’t be quite what it was, at least in a tense game. But all things considered, it’s absolutely the right decision. Trading off a little bit of excitement (and let’s admit it, violence) in order to keep their players healthier during and after their careers is the appropriate thing to do. It’s too late to help Ray Fosse, I suppose, but when even Mike Scioscia, who made a big part of his defensive reputation by blocking the plate, agrees it’s time to amend the rule, it’s time to amend the rule.

I love Gronk and I’ll miss him like everyone else but doesn’t this feel similar to the Super Bowls of the early 2000s? This was a team that flew under the radar and no one expected to win. This was a team that had injuries upon injuries and the leading receiver and MVP was Deion Branch if I do recall. As much as I love Deion Branch, he’s no Randy Moss. I can’t help but feel like the Patriots will figure things out and adapt like they do every time someone goes down. Please don’t forget the Pats were 5-1 before Gronk came back. Who cares about red zone efficiency when you’re winning games? Just win!
— Greg

They were 5-1, when the defense was picking up the slack for a very inconsistent offense at that point. Since then, the defense has been pummeled with injuries, not only the ones to Vince Wilfork and Jerod Mayo that knocked them out for the season, but also to players whose performance has diminished because of physical issues (Aqib Talib and Alfonzo Dennard most notably). Losing Gronk is crushing because it really did appear as though the offense would be capable of carrying the defense, possibly all the way to New Jersey in February. Now, it seems like it all might be too much to overcome. And for the record, the 2001 comp works to some degree, but those 2003-04 Patriots teams were absolutely loaded with talent. They were no underdog. They were a dynasty.

A reminder of warmer days. Anyone want to help me shovel? Dunkin’s is on me. 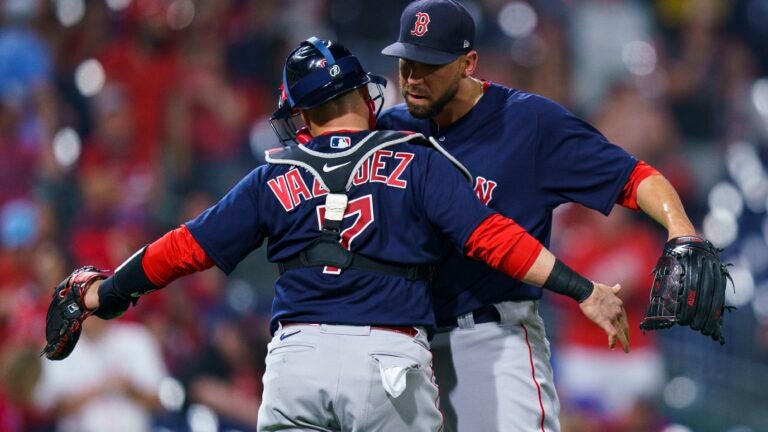