Maybe I’m subconsciously setting aside all of my allotted Righteous Sportswriter Indignation for the Baseball Hall of Fame revelation later Wednesday.

But I just can’t bring myself to get worked up about that other story that certain sports radio hosts are trying to tangle into a big and troubling deal.

Deion Branch signed with the Colts?

Great for him, since the veteran wide receiver, out of the league for the entirety of the season until the Colts brought him in on Monday, gets another Sunday in the league and another game-check, said to be in the $23,000 range.

That’s a nice rate for a week of work, and who knows, maybe he impresses Chuck Pagano and the Colts enough that they keep him around next year in a role on the field or off.

It’s great for the Colts, too. Branch is a bright guy, someone who is on a very short list of receivers who earned Tom Brady‘s trust quickly and never yielded it at any point along the way. It’s a particular tribute to his intelligence that he fit seamlessly, like he’d never left, after coming back in 2010 from his four-season hiatus in Seattle.

Branch has a deep well of knowledge regarding what the Patriots like to do, though nothing specific to this year, obviously. If he has a small nugget of insight that gives the Colts an advantage on a single play, that justifies bringing him around.

The gamesmanship is to be admired, if anything. Stuff like this is part of the fun of sports, evidence of how much they care. Wouldn’t you want Bill Belichick to do the same thing? Wouldn’t you expect him to?

As for how this will actually affect the Patriots, the answer looks pretty clear in the crystal ball. It won’t, whatsoever.

Branch, now 34, had 16 catches for 145 yards for the Patriots last season. He couldn’t get open any more other than occasionally on a quick in-pattern. He was in the league because of his smarts and preparation rather than his ability.

I’m not sure what this guy was going for in suggesting (facetiously, perhaps — I can’t really tell) that Branch could be a threat Sunday. Considering he doesn’t play special teams, it would be a surprise if he dresses, even with Darrius Heyward-Bey done for the year.

His skills had eroded last year. I suspect they haven’t returned in the 11-plus months he’s been out of the NFL.

One last thought: This does nothing to diminish his legacy here as one of the most respected Patriots from the start of their dynasty.

Branch was easy to admire, a player who carried himself with an affable dignity and came through time and again in big moments. He has two Super Bowl rings, and in those two victories he totaled 21 catches for 276 yards and a touchdown.

His quarterback trusted him implicitly, in part because he was always precisely where he was supposed to be. Just because Branch won’t be in the right place Sunday doesn’t change that. 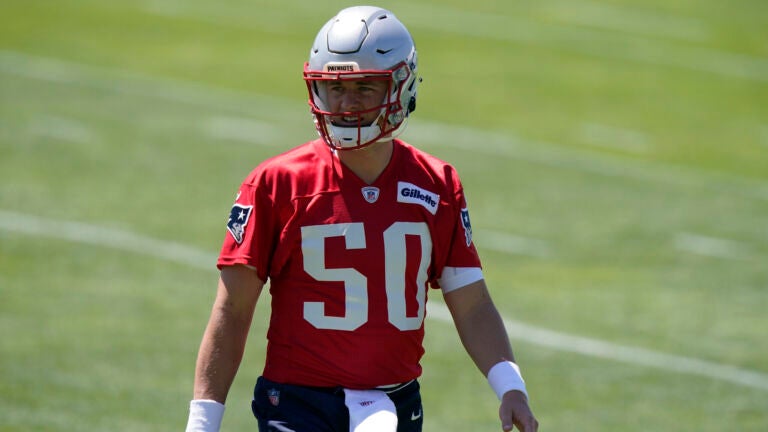