Ten free minutes for me, 10 free throwaway lines for you …

1. If the Red Sox go with Grady Sizemore as their Opening Day center fielder, great. He’s flashing the talent that made him one of the best all-around players in baseball from 2006-08, his ages 23-25 seasons. They should find out what they have. cautiously. But don’t give me the nonsense that Jackie Bradley Jr. needs to make it now or his star will start to dim, either. He leaped to the majors after his sizzling spring last year. When he struggled — predictably given that he’d played just 61 games above Double A — he went down to Pawtucket and put together a very good season, with an .842 OPS and 39 extra-base hits in 80 games. He plays great defense, is said to have off-the-charts character, and is patient at the plate. Sox fans should be patient with him. He’s still on his way.

2. Perhaps there’s a salary cap implication I’m missing, but I’m mildly surprised the Patriots haven’t granted Vince Wilfork his release yet. The more I consider it, the more skeptical I become that he will be anything resembling his old self next season. He’s 32, weighs 350-ish pounds, and wasn’t playing well before his Achilles’ couldn’t take it anymore.

3. DeSean Jackson is a knucklehead — but a supremely talented knucklehead, and doesn’t the fact that the Patriots apparently did their “due diligence” in inquiring about the receiver’s availability from the Eagles suggest they would gladly take on said knucklehead if the price was right? Unfortunately, one aspect of the price (a supposed third-round pick) makes much more sense than the other aspect (Jackson’s $12.75 million cap hit), which should end any discussion of bringing him here.

4. I’m not booking a hotel in St. Louis or Chicago for June quite yet. But I do believe this Bruins team is superior to the one that with a little luck could have won its second Cup in three years last season. The emergence of Carl Soderberg and Reilly Smith and Loui Eriksson‘s capable all-around play gives them more offensive depth and versatility. The great unanswered question concerns how much they will miss Dennis Seidenberg when the stakes are highest. But this 10-game winning streak confirms a truth: this is a superior hockey team in almost every way.

5. Jarome Iginla, popular and productive Bruin, just kind of seems right, doesn’t it? If only he came to Boston a decade ago. I give him endless credit not only for how he’s fit seamlessly as Nathan Horton‘s successor on the Bruins’ top line, but for having the personal grace to recognize that Boston was the place for him after nixing last season’s trade.

6. Daniel Nava in center field? He’s come far as a defensive outfielder. But not that far.

7. Troy O’Leary‘s quote after this was almost as great as his performance: “Luck of the Irish, I guess,” he said after hitting two homers and driving in seven runs in Game 5 of the 1999 ALDS, a game my spiritual cousins at Surviving Grady recalled on St. Patrick’s Day. That was probably my favorite moment in a lifetime of watching the Red Sox … until the last eight games of October 2004, that is.

8. Sign me up for Jabari Parker in green, please. And don’t get down on Andrew Wiggins, either, if somehow the Celtics luck into him. He just turned 19 a month ago — yes, he was born in 1995 — and the elite talent is evident even when the production fluctuates.

9. Highly recommend Jeff Pearlman’s brand-new best-seller “Showtime” — yes, even to a Celtics fan. The remarkably detailed reporting — especially on the Lakers dynasty’s Magic Johnson–Norm Nixon early years — and rich anecdotes more than make up for Pearlman’s inability to resist a groan-inducing metaphor or a reference that would be familiar only to readers of his blog.

Because you can never go wrong with vintage Claude, that’s why. 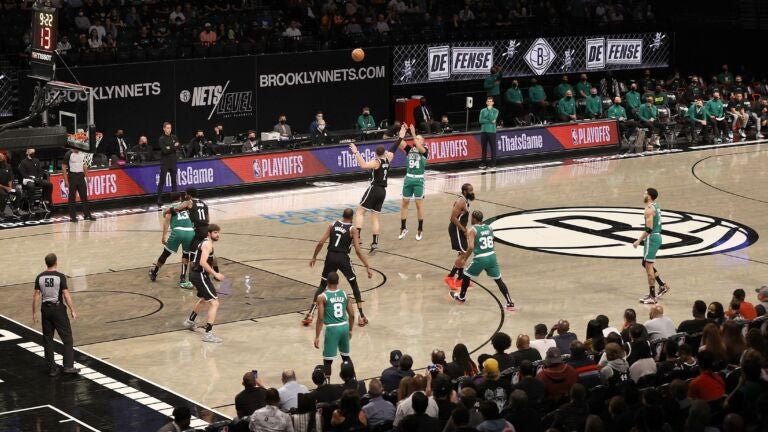