Give me a break with this revisionist nonsense, with the perfect 20/20 hindsight that is oh-so-clear when you’re wearing those special glasses ordered from the back of Sports Caterwauler Weekly.

Don’t tell me now that you wanted Ben Cherington to make major changes to a team that breezed from June through October, bounced the smug Rays, topped the stacked Tigers with a game to spare, and won the World Series on their home field for the first time in 95 years.

You weren’t telling me that. No, you weren’t and never did, not when the duck boat engines were still warm. And you didn’t even suggest later in the aftermath, when the memories and anticipation got us through the frigid winter, that so much of what went right last year would go wrong in the sequel.

So let’s knock off any notion that anyone thought the Red Sox would find themselves in such a subpar state on June 9: 28-34, 9.5 games out of first place, and looking like last year’s Blue Jays while this year’s Blue Jays seize the mojo that a season ago was theirs.
I’m not suggesting that I thought the Red Sox should have maintained status quo, that every one of the champs deserved a chance to defend the title. That’s not how it works; even in 2004, the World Series proved both the final sentence and the exclamation point on Pedro Martinez and Derek Lowe’s Red Sox careers. Turnover is not just unavoidable, it’s necessary.
But to suggest that the Red Sox should have made major changes to areas that looked like strengths in a championship season is either disingenuous or flat clueless.
Don’t tell me you wanted Nelson Cruz now that he has 21 homers in 55 games for the Orioles on a cheapo one-year, $8 million deal. He was coming off a suspension for his involvement with Biogenesis, and at the risk of receiving a barrage of Lou Gorman/Willie McGee emails, there was no spot for him anyway. Shane Victorino was one of the most valuable all-around players in the American League last season, and from what I gather, he’s slightly more suited to play right field at Fenway than Cruz.
At the other corner outfield position, Daniel Nava was coming off a season in which he delivered an .894 OPS against righthanded pitching, while Jonny Gomes delivered a decent .795 OPS with power against lefties.
It was a valuable platoon, and if you have a problem with players sharing a spot, I suggest you acquaint yourself with the powerhouse Oakland A’s. Even planning for some regression, there was no reason to expect a collapse to this degree this year from the Nava/Gomes tandem.
You know what has happened here? A good plan has gone bad. The process was right, but too many of the results have been wrong. I loved the idea of going after Tim Hudson, but the Giants gave him huge money considering his age and Achilles’ injury. Franklin Gutierrez would have been a great depth pickup, but he returned to the Mariners, then got sick. There weren’t many ideal fits in free agency, with no offense to Felix Pie, Ryan Langerhans or Kevin Youkilis.
So Cherington tweaked the roster in a couple of spots, bringing in presumed quality depth for the bullpen with the likes of Burke Badenhop, the rare offseason move that has panned out. The bullpen is actually where Cherington planned for regression the most — signing Edward Mujica, who had 37 saves for the Cardinals last year, ideally was supposed to ease the burden on Koji Uehara.
While Uehara, in his age-39 season, is still working his magic, with a 589 ERA-plus (that’s good) and 12.6 strikeouts per nine innings, Mujica has gone all Melancon on us. Note to Red Sox management: If the Cardinals are skeptical of one of their own, perhaps it’s best not to bring him here. Call it the Renteria Rule. Abide by it.
I’m not sure what else Cherington was supposed to do. You know my thoughts on Giancarlo Stanton — I think he gets here someday, right on the edge of his prime, when he comes time for the Marlins to pay him — but that was not happening this offseason.
Should they have sold low on Clay Buchholz? He’s an aggravating, enigmatic mess, but he’s done this before and returned to thrive, and there was reason to believe his experience in the World Series of surviving without his best stuff might benefit him.
Center field has been a disappointment. Jackie Bradley Jr. accounts for plenty of outs at the plate and defensively, and Grady Sizemore, sadly, offers infrequent flashes of what he was. (Note: He does have Derek Jeter by .001 in OPS. So he’s got that going for him.)
But the Red Sox’ approach to the position was the intelligent one — actually, it was the model for how player development is supposed to work. When the Yankees gave Jacoby Ellsbury $153 million Steinbrenner Bucks, they had a promising young player waiting in the wings.

It hasn’t worked so far with Bradley — he just can’t catch up to a good fastball right now, and maybe he never will — but believing in a Gold Glove-caliber outfielder who had an .840 OPS in his first season in Triple A and showed a knack for making adjustments is nothing to regret. Any dismissal of the state of their farm system is downright ignorant, perhaps willfully.
I know there was some envy about the Yankees’ approach to free agency. That’s natural when a rival acquires players you respect, or for that matter swipes your leadoff hitter.
Brian McCann would have been a fine fit here, and he could have assisted John Farrell with knowledge of the rules, especially the unwritten ones. But for five years and $85 million? That’s almost as absurd as what they’re paying Ellsbury.
It’s always been easy to imagine Carlos Beltran on the Red Sox — it seems like they’ve tried to acquire him multiple times through his stellar career. But the fit, with Victorino in right, Mike Napoli at first base, David Ortiz at DH, and a productive platoon in left, just wasn’t there. They haven’t exactly thrived in New York, either, at least so far. McCann has a .660 OPS, Beltran is at .682 and has a creaky elbow, and Ellsbury has been fine, though fine is not what they are paying for.
The one area — again, Yankee-relevant — where there are legitimate questions about the Red Sox’ thought process comes in regard to international free agents. Masahiro Tanaka has been an instant ace for the Yankees, the only real reason they are ahead of the Red Sox in the standings.
From a distance, it appears that the Red Sox showed lukewarm interest in Tanaka, and the same might be said — though we’re not entirely sure — about Yasiel Puig and Jose Abreu when they were available.
Don’t give me the nonsense about them being gun-shy because of what happened with Daisuke Matsuzaka — that’s like saying a Japanese team shouldn’t sign Clayton Kershaw because, you know, Seth Greisinger had a 4.54 ERA for the 2013 Chiba Lotte Marines. The only thing they have in common is their heritage. Junichi Tazawa has worked out. So did Hideki Okajima. I don’t think anyone would mind if the Red Sox were more aggressive pursuing international elite talent.
If you want to look back on something with a hint of hindsight, well, I’m with you regarding Tanaka. Most of what I wish now that they had done were considerations in my mind at the time. I have no problem finding out what they have in Will Middlebrooks — but I wish they had a better backup plan should he flop or get hurt, at least until Brock Holt emerged. Ryan Roberts never should have seen a moment with this team. I wish they’d made Jarrod Saltalamacchia a qualifying offer. I wish they’d made Jon Lester a more respectful initial offer — I wish they’d signed him long-term, to be honest. Still do.
Hell, a remedial strategy class (Call it Don’t Bunt Bogaerts 101) for John Farrell might have been a good idea — we can say that now that the strategically placed horseshoe he had last year has apparently been removed.
But that’s about all I’ve got. So much of what has happened — the injuries, Dustin Pedroia’s relative power outage, Nava’s collapse — is unavoidable or unforeseen. It’s easy now to say that they should have done things differently.
Hey, at least that David Ortiz contract extension looks pretty good this morning, right? 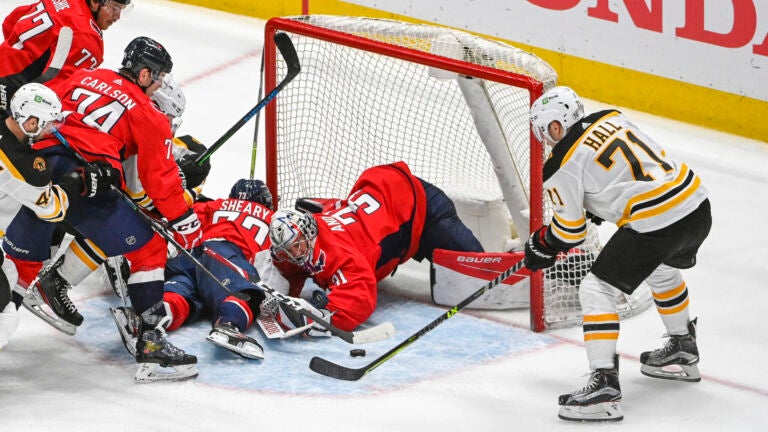