As it turns out, Kirk Minihane’s week-long suspension from WEEI for comments he made about Fox Sports reporter Erin Andrews will last longer than the network’s revocation of advertising from all stations owned by parent company Entercom.

Friday, Fox banned its personalities from appearing on WEEI and pulled all advertising from Entercom’s 100-plus stations nationwide in response to the station’s initial decision not to punish Minihane.

The network was apparently appeased by WEEI’s announcement later Friday — after the ads were pulled — that Minihane was suspended. Fox informed Entercom Wednesday afternoon that the advertising, which industry sources have estimated at a little more than $1 million, would be restored.

“We appreciate Entercom’s recognition and response to the inappropriate comments made by the WEEI host,” said Fox Sports senior vice president of media relations Lou D’Ermilio in a statement. “It is our sincere hope both organizations can now move forward.”

Zachary said he expects that Fox Sports personalities such as Tom Verducci and Ken Rosenthal will be allowed on WEEI programming going forward.

His statement came hours after Fox Sports informed him with a terse letter that it would no longer advertise with Entercom companies.

“Kirk Minihane’s statements regarding Erin Andrews were offensive and deplorable,” said Field. “It is clear by the response from our listeners, advertisers, and employees that Kirk’s efforts to apologize and make this right have been insufficient and ambiguous. We want to make it unequivocally clear that his comments were unacceptable and do not reflect Entercom’s values and standards.”

Minihane, one of three co-hosts of the morning drive “Dennis and Callahan” program, referred to Andrews as a “gutless b—-” on July 16 while discussing the sideline reporter’s awkward interview with Cardinals pitcher Adam Wainwright during the All-Star Game.

Minihane apologized for his comments in a statement posted on WEEI.com that night. But upon returning from vacation last Wednesday – his first day on the air since the original comments—he punctuated a verbal apology by suggesting that Andrews’s success is based on looks rather than ability, saying if she “weighed 15 pounds more she would be a waitress.”

Entercom’s announcement of Minihane’s suspension came approximately two hours after a letter from Fox Sports president Eric Shanks to Field was obtained by Boston.com and the Globe.

“I had hoped by this time we might hear a sincere apology from WEEI, or perhaps someone from your office might have reached out to Fox (which through our film and television businesses is a significant advertiser on Entercom stations),’’ Shanks added. “However, none of that has been forthcoming, and needless to say we are disappointed.” 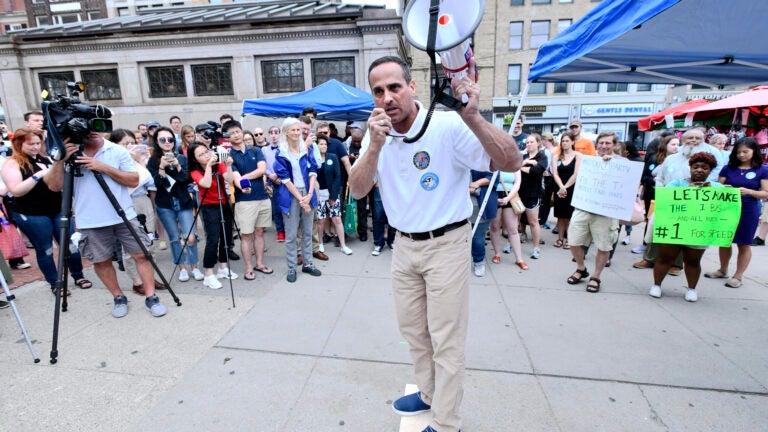