I get it. I do. NFL training camps, after the obvious initial story lines and the occasional sustained surprises, can turn monotonous as fast as Julian Edelman can take a punt from the 20 to the end zone.

Now, that’s not to suggest training camp lacks relevance, or that there won’t be revelations. Hell, it’s just great to have football — even if it’s practice football — back in our sports universe. And of course there are real topics to cover in detail, especially at the beginning:

It’s just that the longer camp goes on, and the more obvious the answers are to the primary questions, the greater the ratio of noise to signal becomes.

Yes, it’s people in my business who are at fault for this.

Column inches and airtime must be filled, and while most do a fine job of combating the tedium by seeking out interesting angles, personalities, and details, there’s a vocal minority that, for lack of real insight or lacking the effort required to gain real insight, is more than willing to allow the conversation to devolve.

I try to avoid acknowledging this nonsense. Sometimes the nonsense wins. This, I am sad to report, is one of those times. So I have to ask:

WHY IN THE NAME OF VAGAS FERGUSON IS THE QUESTION OF WHETHER THE PATRIOTS ARE BEING “OVERHYPED” A TOPIC? WHAT IS WRONG WITH YOU PEOPLE? YOU’RE THE ONES DOING THE HYPING! AND THAT’S NOT EVEN A REAL TOPIC!

So, where were we? Oh, right: I, ahem, find this topic and approach annoying for too many reasons to list here. I’ll give you the top two.

1). There is no possible answer. The Patriots have not played a game since Jan. 19. They will play their first preseason game tonight against the Redskins, who to my surprise were not relegated to the Arena League after last season.

We really have no knowledge of how this team will look beyond what we know about the veteran core and what we’ve seen in practice.

And the latter doesn’t tell you much, as the hastily disbanded Zach Sudfeld Is Totally Headed To Canton! bandwagon from last spring can tell you.

Enjoy the mystery. Don’t try to solve it now.

2) If you want to speculate on an answer, it should be a plainly obvious one. No, they are not overhyped. Let’s take a quick inventory of where this team stands.

They have an all-time great coach and quarterback who guided this franchise toward meeting what were supposed to be impossible standards of consistency during the salary cap era.

They were one of the four finalists in the league last season despite losing the central nervous system of the defense and the All-World tight end to injury.

They lost the AFC Championship Game, on the road, by 10 points, which is funny since that game is discussed as if the Patriots lost in the same butt-whupped manner the Broncos eventually lost to the Seahawks in the Super Bowl.

They signed arguably the greatest cornerback of his generation, a long-necessary ferocious hitter to play the other corner, spent their first-round pick on a fascinating defensive line prospect, and beyond small questions at receiver and safety, look loaded for revenge.

No, the Patriots are not overhyped. Damn you for making me answer that. 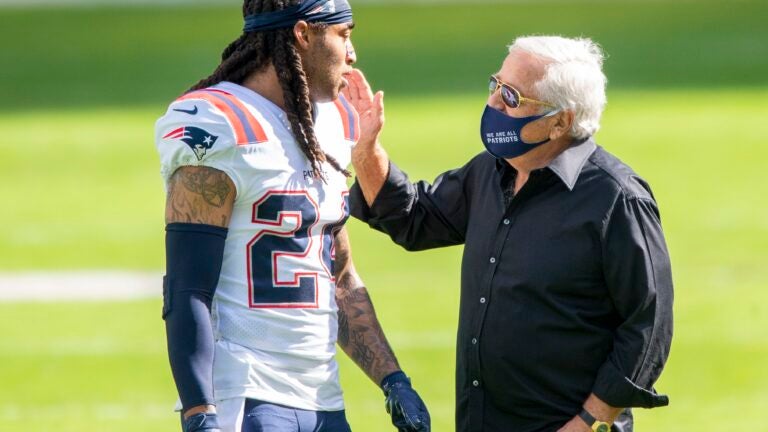