Jeez, I don’t know who writes the headlines around this place, but that’s way too harsh.

So before I get inundated by Yankees message board dwellers — U BETTER RESPE2T THE CAPTIN YOU CHOWDAHHEAD 27 RINGS!!!?!, etc., etc. — let me amend that shameful lack of respect by said anonymous headline writer:

Also: I wrote the headline.

Listen, I’m being facetious to some degree. Believe me, I’d like to dig up that ancient argument from my relative youth that Nomar is a better. For a brief time, he was. But Jeter won the debate a decade ago. Maybe you can even pinpoint it to the precise inning.

Jeter has been damn fortunate in his career — no player in history has been a better match of position, place and time than he was as the shortstop of the New York Yankees in the 1990s and early 2000s.

But greatness becomes him. Jeter earned it through longevity, consistency, and frequent high-profile brilliance. Even a Red Sox fan must acknowledge that he is an all-time great, a face of the game not just for his era but through all of the eras.

That’s not up for debate. He’s sixth all-time in hits (3,445), has been a central figure on five champions (his performance rarely wavered from regular season to postseason, a heck of a feat given the enhanced competition and pressure), and he’s done it all with the same team, a rare achievement worthy of salutation.

I’m just not sure this requires acknowledgment with a commemorative patch while he’s still playing.

Did you see this ridiculousness?

The Derek Jeter patch will be worn by the team from Sept. 7 through the end of the 2014 season. #FarewellCaptain pic.twitter.com/0J80fJnCSX

Commemorating an active player with a patch — something his current teammates are obligated to wear — is tacky enough. But that’s not the end of it.

Steiner Sports, the high-end memorabilia dealer, has an agreement with Jeter that permits them to sell the game-used merchandise from these final games, including baseballs carrying the logo. Steiner is already selling game-worn Jeter jerseys that reportedly sell for $25,000. Imagine the haul they’ll get for jersey with the patch.

Maybe there’s a charitable aspect to this that we don’t know about. Many of the gifts on Jeter’s farewell tour — say, isn’t such a thing also against his alleged humble nature? — have included a donation to his Turn 2 Foundation.

But for a player who is relentlessly praised as the epitome of class, this sure does smell crass. And it’s a recurring theme recently. Jeter recently wore cleats decorated with his own accomplishments — in essence, they were an ode to his baseball-reference.com page.

You’d think he’d have had the self-awareness to take a black marker to that five Gold Gloves nonsense. But maybe self-awareness, like ranging to his left, is one of the tools he lacks.

He’s long been feted as the ultimate team guy, and I’m sure the vast majority fortunate enough to have played with him see him that way. Hey, Mythmaking of the Captain isn’t exclusive to the Yankees — it happened here to a lesser degree with Jason Varitek. But there are clues that Jeter’s team-first approach stops somewhere short of sacrificing something important to him for the betterment of the team.

He should have moved from shortstop a decade ago. Robin Yount did it. So did Cal Ripken. Why didn’t Jeter? Because the identity of being the Yankees shortstop mattered above all else.

And now, there’s this: With a postseason berth slipping away from the Yankees — with 26 games left, they’re five games behind two teams in the race for the second wild-card — shouldn’t he take the burden off manager Joe Girardi and volunteer to take his .619 OPS (.560 in the second half) to a lower spot in the order. Isn’t that what a captain should do?

Or does he think that No. 2 on his jersey entitles him to the same spot in the batting order?

What’s puzzling about all of this — what makes you believe it’s Jeter driving it — is that no franchise in sports does a better job with homages and honoring its franchise history than the Yankees. They have so much history and success to draw upon. Tragedy too.

The Yankees have Monument Park and the coolest old timers’ day of anyone. And they pulled together superbly graceful farewell just last year when Mariano Rivera, the finest closer of all-time, said his goodbye.

Jeter was appropriately central in the perfect final scene, joining longtime teammate Andy Pettitte on the mound to remove Rivera from his final game. Perhaps the Yankees will match or trump that during Jeter’s final game in New York, though its certainly trending toward the commercial and the maudlin.

Rivera has to be the most respected opponent in Red Sox history, particularly after Opening Day 2005.

Jeter? Sure, he’s earned similar respect. Respe2t, even, if he prefers his personal, Nike-branded version of the word.

But don’t deny that “Re$pect” has become a strange part of this too.

I’m not suggesting the emperor has no clothes. But the captain, man, he sure does have some gaudy cleats. 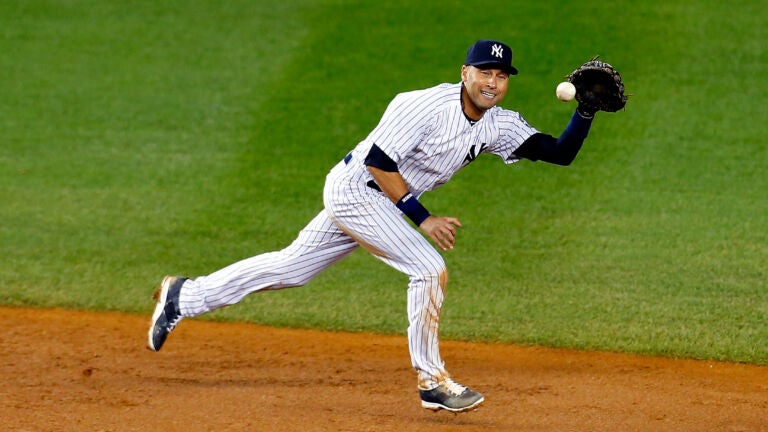