Hell of a neat trick the NFL and Baltimore Ravens pulled off, eh?

In the aftermath of a situation in which Ray Rice, a 225-pound, anvil-bodied, python-armed fading football star, brutally punched out his then-fiancee, the league and the team that employs him managed to come across as his near-equal in the pathetic art of cowardice.

Actually, make that employed him. Past tense, at last. Seven months after a video showing Rice dragging Janay Palmer — then his unconscious victim, now his wife — out of an elevator in Atlantic City, and two months after hapless commissioner Roger Goodell suspending him a paltry two games for his actions, he finally faced some real consequences today.

The Ravens announced via its team Twitter account this afternoon that Rice had been released. The NFL, with its chance to make an honest, enduring stand against domestic violence long since past, instead jumped on the pile, confirming that the player had been suspended indefinitely.

And to think, all it took to get Rice out of the league, most likely for good, was approximately 30 weeks, collective outrage at the two-game ban among men and women from every demographic save for those with a blind rooting interest for a certain despicable football franchise, and, oh yes, today’s release of a previously unseen and horrifyingly graphic video of Rice’s two-punch knockout via the website TMZ.

Anyone who wants to give the league and the Ravens credit for doing the right thing today has not been paying attention. The video was so damning, with Rice seeming almost casual in his viciousness, that they had no other choice but to react.

The Ravens’ decision to announce Rice’s release on Twitter is pretty rich considering that this particular social media format has been an outlet for the franchise’s special brand of insular callousness and stupidity over the last seven months. Twitter is where public relations buffoon Kevin Byrne made us aware of his “I Like Ray Rice” column on the Ravens’ website, which includes this gem of a lede:

If you had asked me on Feb. 1 to name five Ravens players I would never expect to receive a call at 3:00 in the morning about doing something illegal, Ray Rice would be on the list – EASILY.

I’m not sure if we should take that as a defense of Rice or an indictment of 48 other Ravens. But I do know this: I’ve stared at these two tweets for the past several minutes, and I cannot decide which one is more tone-deaf:

Janay Rice says she deeply regrets the role that she played the night of the incident.

Maybe they shouldn’t have used this quote: RT @Ravens: Ray Rice: “Failure is not getting knocked down. It’s not getting up.”

I do know this much — the first one is more offensive. To imply that his fiancee-turned-knockout-victim-turned-wife had anything do with winding up unconscious on an elevator floor is inexcusable. I do not care that Ray Rice has been charitable, or cries at anti-bullying rallies, or whatever other muddling nonsense the Ravens’ crack p.r. team wants to ply the Peter Kings of the world with.

If you punch a woman, it’s never “out of character.” It is your character, no matter what else you have done in your life.

The only question I care to have answered in the coming days and weeks is this: Did Roger Goodell see the video that came to light today before he meted out Rice’s two-game ban in July?

Because if he did, he’s done. Not that it would be any loss. I’m pretty sure the NFL could find some other smug suit to accept his $44 million salary. Perhaps even one with a trace of a conscience.

Among his flaws, this is among the most damaging: Goodell has a habit for making decisions and dishing out punishment based on what he believes public perception might be. Or at least that’s our perception of how he does it. That’s a pretty lousy way to wield authority, and that’s without considering his habitually horrible reads on what that perception will be.

Every action of Goodell’s has one ultimate purpose: Guarding the NFL’s best interests, or, as he likes to put it, “protecting the shield.”

Which is another irony, when you think about it: the one person involved in this awful matter who could use the protection of a shield right about now is Janay Rice, the knocked-down-and-dragged-out new wife of a violent and suddenly unemployed man. 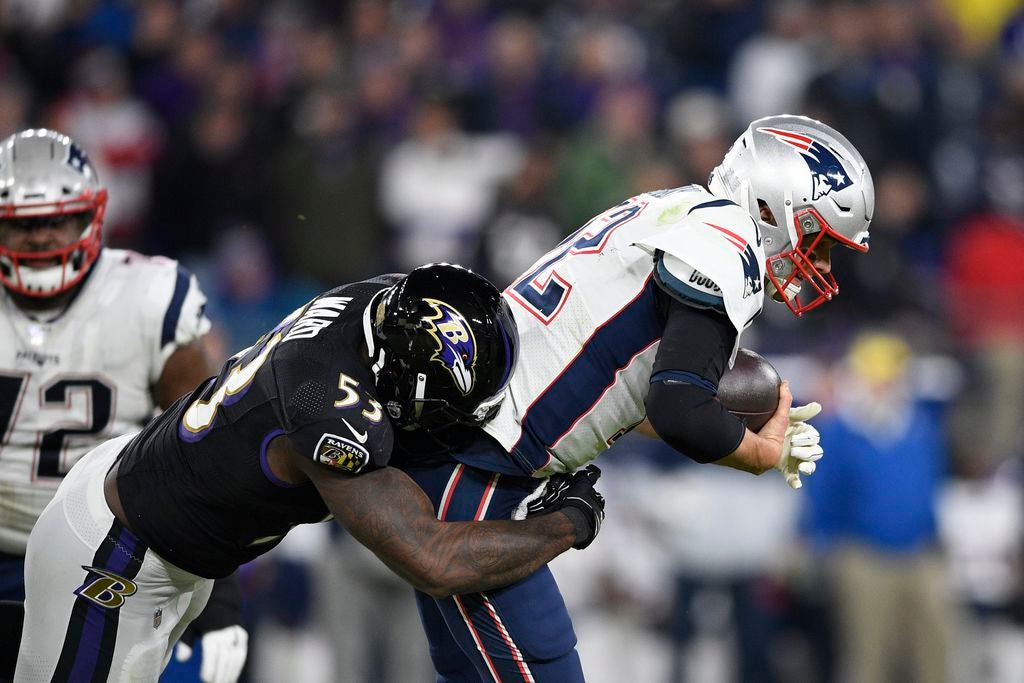 Patriots-Ravens rivalry resumes, but it doesn’t look like an even fight this time