Hello and welcome to Season 3, Episode 5 of the Unconventional Preview, a serious-but-lighthearted, nostalgia-tinted look at the Patriots’ weekly matchup that usually runs right here every Friday around noon. The 2-2 Patriots are at a crossr …

… BELICHICK AND BRADY ARE DONE!! D-U-N!!! THEY’RE COOKED!! THE ARROGANCE HAS FINALLY CAUGHT UP WITH THEM!!! THE WICKED HOODIE IS DEA …

… sorry, someone commandeered the keyboard there. The unruly colleague has been subdued. All good now. Anyway, the Patriots, after Monday’s 41-14 shellacking at Kansas City, find themselves at a crossroads, presuming you can be at a crossroads a quarter of the way into the season while tied with two other 2-2 teams atop the division. The Bengals are 3-0, coming off a bye, and have a chance to prove they’re everything the Patriots were supposed to be this season. But writing off the Patriots now is flat-out foolish. Kick it off, Gostkowski, and let’s get on to Cincinnati already …

THREE PLAYERS OTHER THAN TOM BRADY THAT I’LL BE WATCHING
Actually, this one is pretty much all about Tom Brady: I’m not sure there’s anything new to say here after this week of hand-wringing (and gleeful premature dirt-shoveling) about the performance and mindset of one of the greatest quarterbacks of all-time and the NFL’s current 33d-rated passer.

While we can debate what it means until were sprinting in circles, the reality is that we can all agree on this much:

He’s played poorly for reasons that are both in his control and beyond his control.

The line has been disjointed and porous, and because of this he’s taken lumps from all directions. That’s made him jittery in the pocket, which has led to rushed decisions even when he does have the time.

It’s so exasperating not only because this offense that used to have a Lamborghini engine now runs like my Toyota Matrix with 300,000 miles on the odometer, but because the Brady we’re watching right now is so different from what we’re used to.

The biggest revelation with him when he took over for Drew Bledsoe was — well, there were a few. His poise in the pocket. His pinpoint accuracy. His tempo in running the offense with some urgency.

All of those aspects are missing right now, and save for perhaps the accuracy issue, they are not the result of subtle eroding skills. Brady just seems beaten down mentally and physically, and it is so disconcerting to watch.

But he needs to get over it. He needs to get back to controlling what he can control, and if that means taking a whack to the ribcage from Geno Atkins in order to complete a pass to his second or third read, that’s what he has to do.

He can’t demand that everyone around him do their jobs better if he’s not asking the same of himself.

GRIEVANCE OF THE WEEK
Dammit, McDaniels, I don’t care if you fall behind 42-0 before Bob Costas has even finished his pregame soliloquy. Stevan Ridley has to get more than five touches.

This is one of your more skilled players on an offense that doesn’t look particularly talented at the moment. Your 37-year-old quarterback needs a running game more than he has since, oh, he was handing off to Antowain Smith in 2001.

And yet Ridley is on pace for 62 fewer carries than he had two years ago, when he ran for 1,263 yards and 12 touchdowns.

Ridley and Shane Vereen make for a diversely skilled 1-2 punch at running back. Yet you insisted against the Chiefs on running Vereen — a terrific open-field player but one who goes down on initial contact more often than you’d like — into the guts of the KC defense.

It made no sense, but hey, you’ve always been one to choose degree-of-difficulty over basic common football sense.

Your QB is getting pounded. Your line could use some confidence. You have a good back you’re not using. Run. The. Ball.

I’m not sure if Aaron Dobson yelled at you or not. But Ridley? That man should.

COMPLETELY RANDOM FOOTBALL CARD
“Hi, I’m Boomer Esiason, and this is the CBS Sports Minute. That is a picture of me, Boomer Esiason, at a chalkboard when I was the quarterback of the Cincinnati Bengals. I am holding the chalk and showing it to you. I have just drawn up a play. It is a slant pattern for Carl Pickens. My real name is Norman. Never call me that. Call me Boomer. That’s what Carl Pickens called me. Dogs are way better than cats. Ho-Hos make me thirsty. At what point in our evolution as humans did we develop consciousness? My all body-parts baseball battery would be Larry Hands and Barry Foote. Where are all the Sour Patch parents? Dan Marino never won a Super Bowl. I’m Boomer Esiason.”

CRIS COLLINSWORTH IS A BETTER ANALYST THAN HE WAS A RECEIVER

… and that is a serious compliment, because Collinsworth was a damn good receiver. After starring at the University of Florida — who apparently wore Atlanta Falcons hand-me-down uniforms in the early ’80s — he went on to play eight seasons for the Bengals. Four times he surpassed 1,000 yards, and he averaged 16.1 yards per catch, impressive for a 6-foot-5-inch presumed Ed McCaffrey prototype. Anyway, here’s Collinsworth from his Florida days, long before he ever watched Esiason wield the chalk or spent a Sunday night as Al Michaels’s broadcast wingman.

PREDICTION, OR THIS WOULD BE A GREAT TIME FOR BILL BELICHICK TO EAT MARVIN LEWIS’S LUNCH
Funny how juxtaposed this Patriots-Bengals Week 5 matchup is from last year’s Patriots-Bengals Week 5 matchup. Last year, the Patriots came in as the unbeaten team (4-0) while the Bengals were 2-2. This year, the Bengals, coming off the bye, are 3-0. You know the Pats’ record, I presume. Sunday night is supposed to be in the 50s — perfect October football weather. Last year, the game was played in some kind of freaky monsoon/hurricane hybrid. Last year the Bengals won, 13-6. This year, the Patriots will … uh, well, they’ll probably lose. But it won’t be ugly, and we’ll come out of it feeling better about this team’s issues than we did going into it, especially if they unleash Darrelle Revis and that talented, schematically-miscast defense.
Prediction: Bengals 20, Patriots 17.
Season record: 2-2. 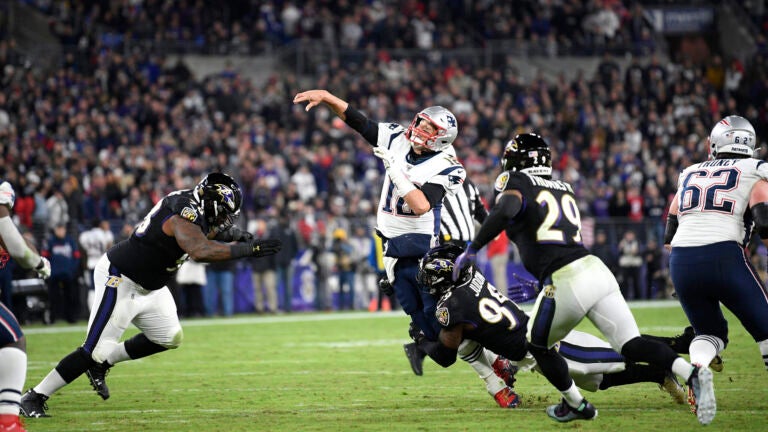