One of the first things you’ll tend to notice while watching the latest in ESPN’s “30 for 30” series is that people in Boston actually gave a damn about Boston College basketball in the late-70’s.

But a pivotal scene from “Playing for the Mob,” debuting on ESPN Tuesday night at 9, shows the old Boston Garden teeming with fans prior to tipoff of a game between BC and Harvard, only a hint of the larger role college sports played in Boston 30, or even 20 years ago.

That’s not to say “Playing for the Mob” is a trip down memory lane, for the documentary film detailing the 1978-79 BC basketball team’s involvement in a major point-shaving scandal gives a glimpse into how some of New York’s most notorious mafia members infiltrated the campus at The Heights, persuading a select few to aid them in their money-making ventures…or else.

Some 36 years later, there doesn’t seem to be a lot of love lost between key characters Rick Kuhn, Ernie Cobb, and Jim Sweeney, the trio of Eagles allegedly paid to keep scores as close as they needed to be that season in order to work with the betting line. Their stories also still have a lot of holes as it pertains to whom took money when, and how much they received. Sweeney and Cobb even seemingly use the Shoeless Joe Jackson defense, admitting their implication, but denying ever having participated in the shaving process.

I mean, who are you going to believe? A group of guys who were merely gullible kids at the time of the incident, or convicted criminals?

At the center of the scandal were Kuhn, a street-smart kid from Pittsburgh, and noted gangster Henry Hill. Yes, that Henry Hill.

Actor Ray Liotta, who played Hill in the 1991 film, “Goodfellas,” takes the role of narrator in “Playing for the Mob,” a nice touch that starts out a bit clunky (Liotta actually introduces the film with, “Boston. Beantown. That’s where it all went down.”) but eventually allows the narrator to take a back seat to the particulars telling the story, including Hill himself, who was interviewed for the movie in 2012, prior to his death at the age of 69.

If you need introducing to Hill, he was a mobster associated with the Lucchese crime family and, most notably, a man by the name of Jimmy Burke, or Robert De Niro to most. Through Kuhn, as well as ex-convict Paul Mazzei, an associate of Kuhn’s whom Hill met in prison, Hill and Burke helped run a scam that earned hundreds of thousands of dollars. According to them. The kids claim to have seen only a fraction of that money, and nobody seems to know if the mobsters, or Kuhn, the intermediary, was stiffing Sweeney and Cobb.

What the film does best is convey the actions of the players from the perspective of 20-year-old college kids, for whom a few, extra dollars can mean a whole week of take-out (or a couple extra cases of Natural Light), and the fear the players – or at least Sweeney – had after threats made by Hill and associates for what would happen if they didn’t play along.

In detailing his first meeting with Hill, Sweeney said, “The guy knew my girlfriend’s name at the time. He says, ‘How would your hunny Moira feel if the next she sees you, you have your balls hanging as a necklace around your neck?’”

Hill counters that with, “I didn’t threaten him or nothing. I just told him, you know, it’s hard to play basketball with a broken arm.”

At another point in the film, Sweeney claims to have looked up during a free throw and saw a big pair of cement shoes. “There were veiled threats and there were specific threats,” he said. Specific threats that I had received through Rick. He specifically said that Henry Hill asked Rick to ask me, ‘What it would be like to wear a pair of cement shoes in the Boston Harbor?’”

Those sort of threats seems to be glossed over by the gangsters, as you might expect, but to a naive college kid in Chestnut Hill, imagine the fear they might instill.

The truth is, even when federal prosecutors studied game tapes from that season, even they had difficulty finding in which instances the players had missed a free throw or bounced an errant pass. That seems to go hand-in-hand with the accounts of the players. And yet, somehow, the government was able to use games between BC and Holy Cross in order to bring down one of the most wanted gangsters around.

The above scene of Liotta in the shower depicted Hill’s reaction after learning about the infamous Lufthansa heist at JFK Airport, where Burke and his crew were said to have made off with $5 million, the largest cash robbery ever recorded in America. The government, tried as they might, couldn’t pin the robbery on Burke, so when they found out about the point-shaving scheme, quite by accident as it turned out, they went after Burke and the accused as sort of a side door to locking them up. Hill mentioned the point-shaving scheme as a sort of a side note after becoming an FBI informant, and the federal prosecutor, Edward McDonald, just so happened to be a BC alum.

Kuhn doesn’t speak about the matter, and Burke died in prison, so most of the particulars are left to Sweeney, Cobb, Hill, and Michael Bowie, a former player who’s still seething over the players’ decision to take cash, as well as his false implication in a Boston Globe story written by former reporter Lesley Visser.

In that same story, from Jan. 16, 1981, Mike Jarvis, coach of then-high school standout Patrick Ewing, said the ensuing scandal would not affect the Cambridge Rindge and Latin’s seniors’ choice of colleges.

“The thought of Ewing joining the scene glazes the eyes of the BC people,” Leigh Montville wrote that same day. “They see not only sellouts every basketball night, but pandemonium in the streets, right out there on Commonwealth avenue. The BC basketball ticket would become the toughest ticket in this city, ahead of the Red Sox, Celtics, Bruins, all of them. The 7- foot kid from Cambridge Rindge and Latin High School would be the absolute finishing touch to a program that has been building and building.”

Ewing, of course, went on to play for Georgetown, where he was a two-time Big East player of the year, national champion, and then went on to have a Hall of Fame NBA career with the New York Knicks.

Boston College was No. 2 on his list, and his decision to go elsewhere was a crushing blow to the Eagles’ program.

Imagine if Ewing played here how different it all might have been. 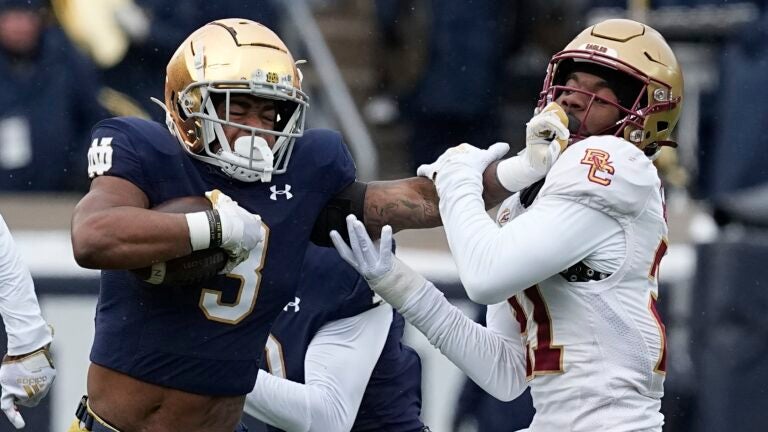