Over the next few days, in appreciation of a certain anniversary, I am re-watching each game from the 2004 American League Championship Series, when everything about being a Red Sox fan changed. Then I’ll come over here and write about all that was memorable, and all that we might have forgotten too.

No, the dates don’t quite match up, and reliving this magical nine-day stretch isn’t the same as living it in real-time. But damn, if anything in Boston sports history is worth reminiscing about at any opportunity, isn’t it this?

Let’s go back to October 19, 2004, when Curt Schilling fortified his legend, Mark Bellhorn rewarded his manager’s faith, A-Rod got slap-happy, and the Red Sox got even with a 4-2 win …

WHAT HAPPENED, NOT-SO-CONDENSED VERSION
Curt Schilling, his torn ankle tendon stitched up in an innovative (and desperate) procedure that somehow works to perfection, pitches seven innings of one-run ball, allowing just Bernie Williams’s solo homer in his final frame. The Red Sox score four runs with two outs in the third inning off Yankees starter Jon Lieber. Jason Varitek drove in Kevin Millar with a single, and an Orlando Cabrera single later, Mark Bellhorn hit a controversial three-run homer to left field for a 4-0 lead. An inning after Williams (the most underrated Yankee star of that era in my opinion) got the Yankees on the board and to within three, all hell broke loose …

With one out in the eighth — a torturous phrase left over from the previous October — Miguel Cairo, the Steinbrenner-lawn-gnome-turned-starting-second-baseman, singled, and Derek Jeter doubled him home, because Derek Jeter was obviously never going to stop torturing the Red Sox. Suddenly, it was 4-2, and Alex Rodriguez — regarded as the premier hitter in baseball at that point, and someone whom the Red Sox coveted over the winter — came to the plate. But rather than securing a cool new status — the next Mr. October? — he stuck himself with a pathetic and appropriate new nickname: Slappy. Rodriguez blatantly slapped a the ball out of Bronson Arroyo’s glove after hitting a weak roller to the Sox pitcher. Briefly, it worked — the ball got away down the right field line, Jeter came around to score, and it appeared the dastardly A-Rod would get away with it. But those meddling umpires got it right: A-Rod, revealing his Scooby-Doo villain tendencies, was called out, Jeter returned to first base, and Gary Sheffield popped out to end the inning …

After a harrowing ninth in which Keith Foulke, winging it with a prayer, struck out Tony Clark to end it with two on, the Sox had officially escaped from New York …

THE BLOODY SOCK AND EVER AFTER
I try to avoid using the word “heroic” in relation to a sporting event, and I cannot find my way out of that trap of exaggerating the valor of men playing a game, the least I can do is qualify it. I’ll usually say “baseball heroics” or “football heroics” or “A-Rod’s prancing anti-heroics.” There’s no real cost to defeat, no casualty beyond perhaps someone’s high-paying job.

But what Curtis Montague Schilling achieved on October 19, 2004? That’s about as close to a genuinely heroic effort that you’ll ever find embedded in a silly yet deeply meaningful game.

What Schilling risked was significant. He offered up the remainder of his career, really, as collateral for that victory, and he did lose half of the next season after surgery. A cynic or a scarred Yankees fan might suggest that some of it was self-aggrandizing, that the extra carmine soaking his sock that night came from a Sharpie and not his veins, that there was no way he would pass up a chance to make himself an icon.

To which we reply: OK. He still delivered in a circumstance in which so many others wouldn’t have even dared to try.

When Schilling climbed the mound at the top the first and Fox’s Joe Buck intoned, “Like a scene from ‘The Natural,’ Schilling climbs the mound and prepares to take on this Yankee lineup,” we had absolutely no idea what to expect. None.

All we knew is that he had nothing in his Game 1 start, and now he was out there with a torn tendon sewn to the inside of his leg to keep it from repeatedly snapping him with jolts of agony.

We had no idea what to expect. What we got was … well, his usual self, or at least enough of a facsimile of the regular-season 21-game winner to keep the Yankees at bay. His command returned. So did his velocity. New York didn’t get its first hit until Miguel Cairo’s double in the third. In the fourth, staked to a 4-0 lead, he escaped a first-and-third, no-out jam by retiring Hideki Matsui, Bernie Williams and Jorge Posada in succession without allowing a run. Williams got to him in the seventh with a solo homer, but it was the first hit he’d allowed in over three full innings.

It was a quintessential Schilling big-game performance in a scenario in which such a masterpiece should have seemed — should have been — impossible. It’s not heroic, no. But it’s as damn close as baseball gets.

SPEAK SOFTLY, CARRY A BIG STICK
Mark Bellhorn spent a year and a half with the Red Sox, and I’m not sure he ever spoke. The man’s mute button seemed to be permanently stuck.

But his quiet nature wasn’t reciprocated by the fans. Bellhorn was a strange player, a three-true-outcomes type (homers, walks, strikeouts) who became more of one-true-outcome type as the season wore on (strikeouts).

Because he whiffed so often, his struggles often looked worse than they actually were. Fans were not shy in chanting for Bellhorn to be replaced by the charismatic defensive whiz Pokey Reese, but Francona stuck with Bellhorn, and in Game 6, it finally paid off.

With two on and two out in the top of the fourth, Bellhorn lofted a Jon Lieber offering deep to left field. The ball soared beyond the pursuit of Matsui, as it approached the stands, it’s ultimate destination was initially unclear. The ball hit something, then dropped to the sod. But what was that something? A fan in the stands, or the left field wall.

Initially, the umpires were as confused as we were. They called it a double, which brought Terry Francona from the dugout in protest. He approached umpire Jim Joyce, who shook his head as if to say the ball did not clear the fence. But replay showed it had, deflecting off a fan dressed in so much black that she looked more like a hitter’s backdrop than one of the usual jackals in the Yankee outfield seats.

Then, another fortuitous twist that surely would not have happened for the Red Sox in other Octobers at Yankee Stadium went their way:

The umpires, led by the usually combative-to-a-fault Joe West, somehow got a crucial controversial call right in the Red Sox’ favor at Yankee Stadium. After a two-minute conversation, the ruling was home run. It is unclear whether Mark Bellhorn spoke after getting the good news. But he did clap his hands like a man who was celebrating a little bit of redemption.

AND INTRODUCING A-FRAUD
Five best things about the moment we found out A-Rod was really a heel:

1) Bronson Arroyo’s unimpressed pose after A-Rod slapped the ball away. We later found out that Arroyo and A-Rod were high school rivals and the laid-back Sox pitcher had him pegged as a phony long before the rest of the baseball world figured it out.

2) Jeter’s fist-pumping routine as he crossed the plate, so sure that the breaks were about to go the Yankees’ way once again. Hey, how about you return to first base there, Captain, while we call out your best old ex-friend A-Rod for interference? Sound like a plan?

4) Yankees fans throwing debris on the field. Don’t ever scold Boston, jackals. You defended A-Rod once when you knew he was in the wrong. Not classy. Jackal-y.

5) The umpires, led by West, somehow got a second crucial controversial call right in the Red Sox’ favor at Yankee Stadium. Of all the ridiculous developments in this series, this one may remain the most unbelievable.

NEW ENGLAND STATE OF MIND, POSTGAME
After Foulke slipped one last 83-miles per hour fastball-turned-changeup-turned-prayer past the ever-helpful Tony Clark, he let out a huge exhale before hugging Varitek. I’ve always figured every Red Sox fan with any emotional investment whatsoever exhaled in perfect unison with Foulke at that moment. The Red Sox were even, and the hope was real. But I have to admit to some hovering cynicism in that moment. What was the only way they could trump the disappointment of the previous October? Well, how about falling behind 3-0 in the series, rallying with extraordinary roster-wide fortitude to even the series … and then crushing us all again by losing a Game 7. Wouldn’t that just be like them? Oh, we enjoyed the Game 6 win, at least after that collective exhale. But we couldn’t savor it, not for long. Winning a do-or-die game at Yankee Stadium — one in which a couple of crucial calls actually went the Red Sox’ way — was a sign that something had changed. But we didn’t know how much yet. There were still ghosts requiring exorcism. 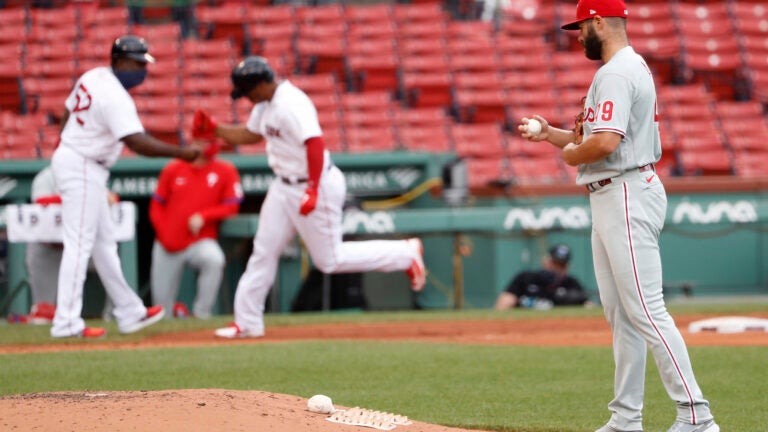