Welcome to Season 3, Episode 9 of the Unconventional Preview, a serious-but-lighthearted, nostalgia-tinted look at the Patriots’ weekly matchup that runs right here every Friday afternoon. The 6-2 Patriots, coming off a gratifying 51-23 destruction of the Bears, take on Peyton Manning and the 6-1 Broncos in a game we’ve all been anticipating since … well, when? The end of the AFC Championship Game? The moment the schedule came out? Yes, this is the one we’ve been waiting for, and it comes with the Patriots, who have actually outscored Denver, 238-224, playing their best football of the season. Can’t. Wait. Kick it off, Gostkowski, and let’s get this thing started already …

THREE PLAYERS OTHER THAN TOM BRADY AND PEYTON MANNING I’LL BE WATCHING
T.J. Ward: You know the movie and the plot. Ward broke Gronk. Gronk got repaired. Gronk spent the next several months doing this:

Repaired Gronk now looks just like unbroken Gronk. He is again one of, if not the, most unstoppable weapon in the NFL. But will revenge be his? Will he need to wipe Ward off the bottom of his cleats at some point en route to the end zone? That’s the ideal script around here. But these Patriots-Broncos games, they do tend to veer off script.

Meanwhile, Ward, our villain, in this tale, is with a different team than he was when he aimed his helmet and systematically destroyed Gronk’s knee.

He signed a four-year contract with $14 million guaranteed in the offseason to hop from Cleveland to Denver. He’s made an impact as a hitter, but he’s made zero impact as a playmaker — he’s basically having Lawyer Milloy’s 2002 season right now.

He’s going to literally run into Gronk at some point Sunday. He’ll try to tackle him low, and we’ll cringe. Should he tackle him high, let’s just say it will be regrettable.

Here’s hoping that this movie becomes known as Gronk’s Revenge, and after dispensing of Ward, he spends the bye week hunting for an unsuspecting Bernard Pollard.

Denver’s running back: Montee Ball has been out since Week 4 with a groin injury. Ronnie Hillman has a bum shoulder and has been limited at practice. Knowshon Moreno, who ran for 224 yards against the Patriots last November, is on the Dolphins’ injured reserve list. Otis Armstrong is 63 years old. The Patriots may tempt Denver to run the ball just as they did during last season’s matchup. But will Manning again take what they give him this time around? And if they do run, who will be taking the handoff? Does anyone know the whereabouts of Olandis Gary?

Aqib Talib: I know it’s not possible financially, and it has nothing to do with the Patriots being cheap. But it’s a fun football daydream to imagine Talib and Darrelle Revis in the same defensive backfield. They’d have been the modern-day Mike Haynes and Lester Hayes … or if you want to stick to a Patriots comp, Haynes and Raymond Clayborn at his peak.

Talib came to New England with the damaged and probably unfair reputation of someone who, oh, might incite a riot. Instead, he ended up being a riot. If there’s any justice, he gets an NFL studio gig when his career is over — hopefully Ray Lewis’s, or maybe Mike Ditka’s.

The only frustrating aspect of Talib’s season-and-a-half here was that he couldn’t stay on the field in the big moments. Related to that, he should probably keep an eye out for Brandon LaFell at all times. He sets the meanest picks seen in these parts since Kendrick Perkins was doing work at the Garden.

THERE IS NO GREATER TRIBUTE TO THE PATRIOTS SUPER BOWL VICTORIES THAN THIS
I had no idea that there were 22 players who won three Super Bowl rings here. I suppose that makes sense given that the Lombardis were collected in a four-year span, a relatively small window. But still .. 22 three-time champs? That is amazing.

Seventeen players will be part of a ceremony at Gillette Sunday. Mike Vrabel, Larry Izzo and Adrian Klemm will be absent because of coaching duties. Adam Vinatieri has to be in New York in case the Colts require any clutch field goals against the Giants. And Tom Brady, he’s preoccupied Sunday with making progress toward a fourth ring.

But 17 is a great turnout. Some of these guys — Ty Law, Willie McGinest, Tedy Bruschi, Troy Brown and Matt Chatham — remain familiar because of their burgeoning media careers. Joe Andruzzi remains in our consciousness for his tireless charity efforts. We hear Matt Light on the radio from time to time, and Stephen Neal hasn’t been retired long. No one will forget Kevin Faulk, the standard-bearer for third-down dependability.

There are fences that have mended. Richard Seymour, whose arrival as a first-round pick in 2001 changed the defense, departed acrimoniously. It’s great to see him return for his overdue acknowledgment. Same for Ted Johnson, who fought the brutal darkness of concussions. Johnson is a radio host in Houston now, and while he politely passed on an interview request this week, he assures us that he’s in a good place. It will be nice to see him back at this place — he was a hell of a tackler, and one of the overlooked stalwarts from that early 2000s defense.

But some of the other names have faded. The reminders of Je’Rod Cherry and Patrick Pass, of David Patten and Roman Phifer (man, they could use a couple of clones of that guy), of Tom Ashworth and Lonie Paxton, they are all welcome.

These guys are always worth celebrating. They changed the franchise. But there’s an added bonus to doing this Sunday, and I love it. They’re tweaking Manning. Oh, the Patriots have plausible deniability, but you know the truth.

All of these players have the three rings. Everyone in Manning’s family has three — and only one belongs to him.

The gamesmanship, like these 22 players, is always welcome here.

John Elway remains the most talented quarterback I’ve ever seen, and for a long time, he didn’t have a whole lot of help in his huddle. I suspect Manning would not have fared quite so well — or stood for it, really — had he been saddled with the likes of Vance Johnson, Ricky Nattiel and Sammy Winder as the best skill-position players to play with him during his prime.

Then again, we should probably be happy that Manning and Marshall Faulk were teammates for just a single season. Imagine the havoc they’d have wreaked in tandem.

… John Elway (nor that nerdy kid who looks and talks like a young Matt Hasselbeck) is convincing me to buy that Vortex. My Nerf is just fine, thank you.

So unless Norris Weese won a Screen Actors’ Guild award that I don’t know about, Manning is definitely the best quarterback/actor in Broncos history.

PREDICTION, OR HOW CAN ANYONE WHO FOLLOWS THESE TEAMS BE SICK OF BRADY VS. MANNING?
I mean, I understand it if you’re, say, a Bills fan, or even if you’re just sick of their familiar faces. I’m sure for the rest of the country it’s like what the Jeter Effect was for us. OK, he’s great. Can you stop telling me how great he is now?

But 16 matchups — XVI matchups! — between two of the greatest ever to play the game, who are still competing for championships and playing at an extraordinary level — at the combined age of 75? This should be savored like we savor the 39 career match-ups between Larry Bird and Magic Johnson. Savor it even more when Brady improves to 11-5. 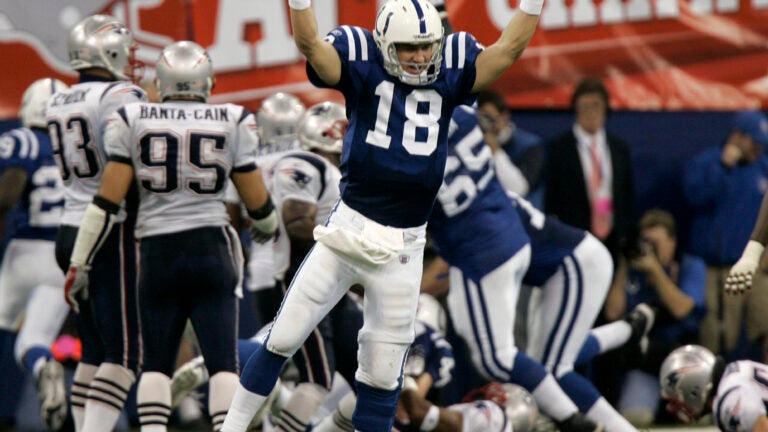