Welcome to Season 3, Episode 10 of the Unconventional Preview, a serious-but-lighthearted, nostalgia-tinted look at the Patriots’ weekly matchup that runs right here every Friday afternoon. The Patriots (7-2), coming off a well-deserved bye week, take a five-game winning streak to Indianapolis, where they’ll face Andrew Luck and the young, talented Colts (6-3), winners of six of their last seven games. This one sure looks like a shootout — or will the Patriots’ defense rise to the occasion? Kick it off, Gostkowski, and let’s get this thing started already …

THREE PLAYERS OTHER THAN TOM BRADY I’LL BE WATCHING
Luck: As a member of the sports media and thus someone who is at least guilty of this by association, I’ll acknowledge my culpability along with the plea:

The prime instance of this is when the ESPN Sunday NFLCountdown panel realized that you can’t spell elite without the first three letters of Eli Manning’s name and nearly spontaneously combusted in unison at the cleverness of their wordplay.

Here’s what we know about Andrew Luck. He’s 25 years old, was the No. 1 overall draft choice in 2012 out of Stanford, he’s surpassed his career high in touchdown passes just nine games into his third season (26), leads the league in passing yards (3,085), and seems to have a bright future as one of the NFL’s marquee stars.

He’s going to be a hell of a challenge for the Patriots Sunday night, that much I know. But the elite debate? I’m going to let you argue that with your flat-screen friends Skip and Steven A. I just wish someone could come up with a decent synonym once in a while. C’mon, someone refer to it as the creme-de-la-creme debate, just once. You know John Dennis wants to.

Gronk: Over the last five games, all Patriots victories, he’s averaging 7 receptions for 103 yards and a touchdown. Great numbers — and it feels like he’s contributed even more than that, doesn’t it? Here’s hoping he ends up in a few matchups with Sergio Brown that don’t involve blocking on an extra point.

Ahmad Bradshaw: Trent Richardson is the Colts’ back with the pedigree, having been the third overall choice in the 2012 by the Cleveland Browns out of Alabama.

Given the way his pro career has gone — the Browns gave up and dealt him to the Colts last September for a first-round pick they parlayed into Brian Hoyer’s caddie — you’d almost assume he had gone to Penn State, the home of some notable running back flops over the past couple of decades.

While Richardson has salvaged his career to some degree this season, running for 391 yards and a 3.6 per carry average (his career YPC is a Marion Butts-like 3.4), he is hardly the running back the Patriots should consider a threat.

That designation goes to Ahmad Bradshaw, who did not enter the league with acclaim — he was a seventh-round pick by the Giants out of Marshall in 2007 — but who has built the kind of workmanlike, productive career that you know Bill Belichick appreciates, even as it has foiled some of his best-laid plans.

Bradshaw scored the winning touchdown as a member of the Giants during Super Bowl XLVI at Lucas Oil Stadium, and he has revived his career with the place as his home venue. Bradshaw has run for 421 yards at 5.1 YPC clip. And he may be even more dangerous as a receiver, with 34 receptions for 293 yards and 6 touchdowns. It will be fascinating to see how the Patriots plan to match up with him.

Because I know you were wondering, here are the top 10 leading scorers in Patriots’ history:

As Gostkowski closes in on Vinatieri (but first, he has to catch Gino Cappelletti), the timing of this matchup feels right, an opportunity to appreciate both kickers.

Vinatieri is a legend and an icon and — hell, go ahead and call him elite. I’ll let it slide in this instance. He’s a member of the Three-Ring Club with 21 other Patriots, and it’s just too bad he couldn’t make the ceremony honoring that championship crew during the Denver game.

The man’s excuse for his absence is viable, though — at 41, he’s still thriving in his 19th NFL season, still the one you want lining up the kick with three seconds left and the score tied.

He’s made his last 26 field goal attempts, and after his decade booting frozen pigskins though the New England winter air, we must admit it was savvy move for him to depart for Indianapolis’s indoor arena, where he’s become just the second player in league history to score at least 900 points for two teams.

He doesn’t have the big-game pelts his predecessor had — hell, no other kicker in NFL history can match Vinatieri in that regard.

But he’s been remarkably efficient, and the Patriots have been fortunate to have found a successor to Vinatieri who may not make you forget him — why would we? — but who never makes you long for him, either.

Gronk is 17 touchdowns away from being highest-scoring position player in franchise history. That’s almost hard to believe given the time he’s missed and that he’s just 25 years old. But it’s also a tribute to his utter dominance when healthy.

Among players who never kicked a football through the uprights, Stanley Morgan is the top scorer, with 408 points. Is there a more unsung player in Patriots history? He averaged 19.4 yards per catch during his 13 years here, which is 4.3 YPC more than Randy Moss, the greatest deep-threat ever, averaged during his four seasons in New England. It’s not just that Morgan’s No. 86 should be retired; it’s that it should have been retired a long time ago.

Tom Brady is tied with the likes of Vincent Brisby, Shawn Jefferson, and Derrick Ramsey for 53d on the Patriots’ all-time scoring list with 84 points. Obviously, there’s a catch: Touchdown passes, of which Brady has 384 (or 2,286 points’ worth), are credited to the receiver.

Steve Zabel and Justin Canale are tied for 338th on the Patriots’ scoring list with 2 points each, which puts them last among all players who contributed something more than a single point. Here’s Canale’s obit from October 2011. Interesting life.

Berry had 631 receptions in 13 seasons as a Colts receiver, and a .552 winning percentage in six years as the Patriots’ head coach.

PREDICTION, OR WHAT’S WITH THE REUNION OF THE 2010 PATRIOTS’ DEFENSIVE BACKFIELD IN INDY? The potency of the Colts’ offense is obvious from a glance at their talented roster (Luck, Bradshaw, T.Y. Hilton, Reggie Wayne, Dwayne Allen) and at the league rankings (first in points, passing yards per game, and yards per game).

But the Patriots’ versatile and deep defensive backfield aggravated Peyton Manning and the loaded Broncos, and they are certainly capable of doing the same to the Colts, even on the road.

And there’s no way the Colts — with Sergio Brown and Darius Butler playing relevant roles in their defensive backfield — are stopping the Patriots. Brady won’t match the numbers Ben Roethlisberger put up against the Colts in October (522 yards, six touchdowns), but he’ll come close, and we’ll have more evidence that the Patriots stand alone as the class of the AFC.
Prediction: Patriots 42, Colts 24. 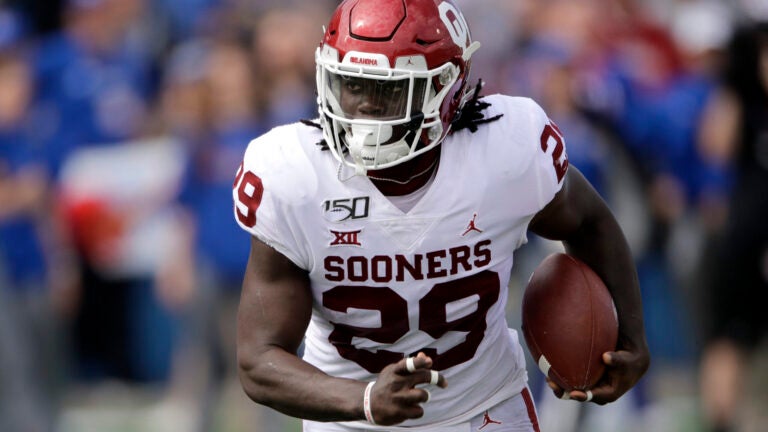