Say, has Giancarlo Stanton actually signed his colossal deal with the Marlins yet?

Too soon to start a rumor that it’s hit a snag and he’s having second thoughts about working for Jeffrey Loria into his late-30s?

Yeah. Probably too soon. Stanton cannot turn down $325 million and the multi-generational security that comes with it.

Still, I’m not completely abandoning hope until the ink is dry, the press conference is complete, and Loria turns back into a bat and returns to his tastefully decorated cave.

Quick note: The mailbox is even fuller with baseball questions than usual. The Patriots questions that I got this time around carried the tone of a Felger/Mazz-ish talking point for some reason.

Given how well the Patriots are playing and how well-constructed this roster looks right now, I’m not particularly interested in duking it out with the straw man about whether they’re “cheap” or how much time Brady has left playing at a high level.

Those are transparent, mind-numbing debates for another day and outlet.

You want that answered, you’re going to have to wait on hold for an hour or two.

Looking back to this past year, did the Xander Bogaerts to 3B for SS Stephen Drew experiment essentially end any opportunity for the Sox to look for a SS this off-season instead of borderline and expensive FA 3B options? A guy I am thinking about is Elvis Andrus via a trade.
— Andy W.

Interesting theory, Andy, and I think there’s a lot of truth to it. I’m not a big believer in the theory that moving to third base is the reason Bogaerts turned into Johnny LeMaster for three months (again, see: correlation vs. causation). Seems to me that happened because of this mystifying pitch called the slider that has this wicked sharp break to it, as if it were developed by some evil pitching coach (probably Roger Craig) for the sole purpose of humbling would-be phenoms.

I suspect the Red Sox management feels essentially the same way, perhaps with just a small amount of credence given to the position change’s effect on Bogaerts’ frame of mind. But … is apparent that he is more comfortable at shortstop than third base, and the Red Sox are rightfully giving him the opportunity to prove he can handle it defensively once and for all.

So at least for now, the answer is yes, it does limit them from pursuing a shortstop. But if Bogaerts struggles, Deven Marrero isn’t ready, and the hole at third base isn’t filled by Pablo Sandoval or some other non-Middlebrooks solution, I could see them revisiting this midseason and pursuing an established veteran with a dependable glove.

Andrus fits that profile, though his contract is daunting. He begins an eight-year, $120-million extension this year that takes him through age 34. Sounds like a future Dodger to me.

Would love to hear your take on whether the Sox could/should try to bring Adrian Beltre back. The Rangers aren’t doing anything next year and are probably looking to get younger/cheaper. Do you think Will Middlebrooks and Brandon Workman would get it done? We know what Beltre would bring to the table in Boston.
— Zaw

I’m all for bringing Beltre — a.k.a. The Comedy And Baseball Superstar NESN Didn’t Know It Had — back. Think I even touched on it here in the Mailbox in recent weeks. He’s on the short list of my favorite players to watch, right there with Stanton, Andrew McCutchen, Mike Trout and, obviously, Eric Sogard.

Can’t see how it’s even a vaguely legitimate possibility until at least midseason, though. He’s got one year left on his deal with a vesting option for $16 million in ’16. For now, the Rangers are pretending they’re contenders, and he’s still an excellent player (.324/.388/.492 last year, albeit with a slight dip in power).

I’d love to see him back. One year of Beltre was not enough. But it won’t be soon, and it’s going to take a hell of a lot more than the Red Sox’ spare parts to make it happen.

@GlobeChadFinn Who should take the last shot for the Celtics?

There’s no obvious choice — I mean, Jeff Green is probably their most skilled scorer, but he’s also the most likely to step on the sideline while teeing up his shot, you know?

I don’t mind Rondo taking it, provided that he actually takes it. It’s matchup-dependent with a player like Jared Sullinger or Kelly Olynyk, or even Brandon Bass.

Celtics fans know Evan Turner has hit a few game-winners in his day, but man, is he a frustrating player. Talented, and you have no clue what he’s going to do.

He also spends a lot of time calling for the ball, which is going to drive his teammates to tune him out sooner rather than later.

@GlobeChadFinn After a huge 2013, why is Vic such an afterthought going into 2015? If healthy, his defense in right is irreplaceable.

For no apparent reason, I read Vic as Victor Martinez at first, which probably is an unintentional clue how far the intended Vic — Shane Victorino — is off the mental radar right now. (It’s also a sign of my abject stupidity. Just figure I should own it.)

Given that he’s coming off back surgery, turns 34 at the end of the month, and has missed 170 regular-season games in two seasons with the Red Sox, the wise thing to do regarding expectations is to have no expectations whatsoever. Better for him to be a pleasant surprise — something that is at least moderately possible — rather than to count on him and have to scrounge for Plan B after he plays just 30 games again.

@GlobeChadFinn How long did it take you to dismantle your Stanton shrine when you heard he was resigning in Miami?

If for some reason you had asked me, in the moments before I found this while binge-watching old Midnight Special clips on YouTube, to name the person who reminded me the least of the great Earl Campbell circa 1980, without a doubt I would have replied, “That’s easy. Christopher Cross. Especially when he’s singing ‘Sailing.” The internet, the like the ’80s, is a wondrous and terrifying place. 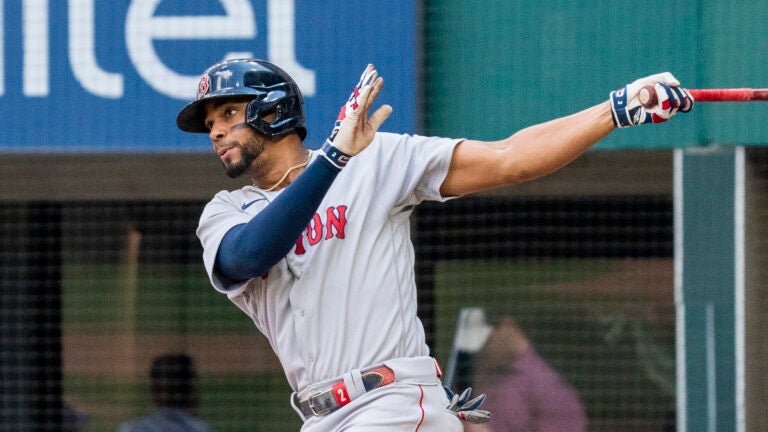