An all-Twitter ‘box this week. Let’s dig in with some possible Blue Jay envy:

@GlobeChadFinn who do you give up if Donaldson is on market before we sign panda?

That’s a great question. Donaldson has been a tremendous player the past two seasons. He is an exceptional defensive third baseman and a legit middle-of-the-order bat. He’s been second in WAR among position players (B-R version) in each of the past two seasons, trailing Mike Trout both times. And while he’s going to start making some money via arbitration soon, he won’t be a free agent until 2019. You could argue the Jays traded for the second-best player in the American League and got him on a cost-controlled deal and you wouldn’t be wrong.

But … Donaldson is older than you probably think. He’ll be 29 in December, which is four years older than the third baseman who went to Oakland in the deal, Brett Lawrie. And Lawrie, for all of his injury and maturity issues, shows up as the No. 5 comp on Donaldson’s list. Add in the two young arms the A’s got as well as a 18-year-old lottery ticket Franklin Barreto, and the suspicions that Billy Beane sees something we don’t start to percolate.

I love the Jays’ pickup of Donaldson. With him, Jose Bautista, and Edwin Encarnacion in the same lineup, it becomes practically imperative for the Red Sox to add a legitimate righthanded starter to the top of the rotation.

It would have been fascinating to see what the Red Sox might have offered the A’s for Donaldson. Beane loves buying low on one-time phenoms, Lawrie being the obvious example here. I bet he would have taken back Will Middlebrooks or Jackie Bradley Jr. as a third or fourth piece in a deal. Guess we’ll never know.

I’m glad it worked out this way. I mean, you’d rather see Donaldson in another division, if not another league entirely. But given the choice between paying cash for Pablo Sandoval or trading a top prospect if not two for Donaldson, well, here’s to the panda heads. I like having Sandoval and Mookie Betts, you know?

@GlobeChadFinn How hard is it to believe that Comcast Chicago is shutting down their only sports talk radio station while Boston carries 2??

It’s pretty remarkable, a tribute to the unyielding interest of sports fans in this market. The success of the teams is also a huge factor, obviously, and the talent of some of the hosts — not all, but a majority, probably — is also relevant in drawing and keeping an audience. I’ve mentioned it before, but perhaps not enough, so here’s the reminder again. We get so caught up in the rivalry between The Sports Hub and WEEI and their battles in the ratings that it’s easy to overlook that this region sustains two highly rated sports stations. That’s kind of incredible, and one of the greatest tributes to fans’ passion for their teams around here.

@GlobeChadFinn Yet another great Patriots season; what has been your favorite aspect of this year’s campaign?

I’m not sure if there’s one favorite aspect, Jason, because there has been so much that’s fun and rewarding about this season already. Gronk’s return to beast-man form is right up there … but if that trumps the individual brilliance of Tom Brady and Darrelle Revis, or even the emergence of Dont’a Hightower, it doesn’t trump these other feats by much.

And that brings us to Chris’s question, which is another real satisfaction of this season so far: the emergence of unheralded players as important contributors, whether we’re talking Alan Branch, Akeem Ayers, Tim Wright, Jonas Gray, and on and on. It’s always a blast to watch Belichick bring in players whose skills fit a specific need, and then to watch him utilize them in a way that brings out their best.

To answer the question, though, it’s probably Wright for me, because there was so much howling about the Logan Mankins trade, and suddenly for a number of reasons (money, Mankins’s fading skills, Wright’s good fit here) it’s starting to look like a very savvy move.

@GlobeChadFinn what about putting Boegart in a deal for Hamels and moving Betts to SS? XB & Cespedes for Hamels & Howard.

Chris, I think you must have eaten some bad turnip on Thanksgiving or something. I could see the Phillies having some interest in Cespedes, but only if they’re getting a package of prospects as well. On every other level, it doesn’t work at all.

2. There’s no indication Betts, who has an erratic arm, can play short.

3. RYAN HOWARD?!?!? The Red Sox wouldn’t claim him if he were outright released, let alone trade for a 35-year-old lefthanded-hitting DH who had a .690 OPS last year and is due at least $60 million.

No. They’re too preoccupied with making sure Keith Law doesn’t give Curt Schilling any more science lessons.

@GlobeChadFinn If the Revs win an MLS Cup, will they get a Duck Boat parade?!

Figure since the question comes from a colleague, we’ll flip around the usual protocol and let a reader answer. Especially since the answer is pretty much perfect:

@AdamMKaufman @GlobeChadFinn Sure. It starts at Bass Pro and rolls all the way to the CBS Scene. It’ll be epic!

Pete Rose was a better gambler than he was a singer. By the way, while we’re inexplicably talking about Rose, I had completely forgotten his 4,000th hit came during his brief stay with the Expos. 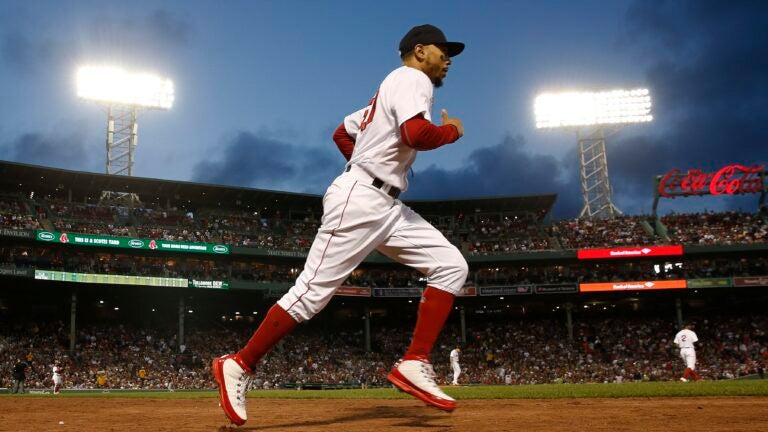 Sports Q: Should the Red Sox back out of the Mookie Betts trade?