During this crazy run of success, the Patriots have had rivalries with the Colts, Pittsburgh, Baltimore and Denver. Are the Colts getting back in line to start a new rivalry, or is this a one-year fluke?
— Razor Shines

Looks legit to me. They have the ingredients to be a contender for a long time: a franchise quarterback, a smart coach, a core of productive young players, a sane owner who doesn’t drive around with a giant bag of cash in his car… well, maybe not the last one, but they’ve got most of the elements. I’d bet on them being the Patriots’ main postseason rival in the foreseeable future, though today they’ll be little more than a speed bump. By the way, Mr. Shines…

… your question and citing of the Patriots’ primary past rivals during this run inspired me to look up how many quarterbacks and coaches the Colts, Steelers, Ravens and Broncos have gone through, combined, during the Tom Brady-Bill Belichick era. The answer, in sum, is this:

Pretty amazing. Franchises and rivalries have been rebuilt and rebuilt again in the 15 years that this Patriots’ train has chugged on.

First screen pass to Julian Edelman has to go for about 60 yards because all the Colts defensive backs will be backpedaling to stay with receivers.
— Guest

That made me laugh. It’s a distinct possibility. Off-the-wall prediction for Colts-Patriots that I actually kind of believe? Danny Amendola will score two more touchdowns today. Also: Sergio Brown is going to have to be peeled off the turf.

Doesn’t Al Michaels have the cachet to tell Roger Goodell to take his prepared statement and shove it? Thought it was really shameful that he allowed himself to be a puppet for the commissioner (who himself is a puppet) and it was only made worse by the fawning he and Cris Collinsworth engaged in immediately afterward. Lost a lot of respect for Michaels at that moment.
— Pat Sheridan

I was surprised too. Imagine that they were told in no uncertain terms that they had to do this by someone they respect — perhaps producer Fred Gaudelli, or someone even higher up at NBC. I wish I had addressed that aspect, the why-would-Michaels-agree-to-it element, a little more in my immediate column about the situation. What’s obvious is that no one bought it — no, Peter King, Goodell’s redemption will never come. I feel like that whole scene was contrived right down to Goodell’s smiley conversation with his wife. And man, Michaels clearly wanted to get through it as soon as possible — I think he read the statement with this kind of world-class verbal acceleration:

Supposedly Michaels is going to be the guest on Bill Simmons’s podcast soon. Hopefully he addresses it with some candor then. NBC hasn’t made him or Collinsworth available to talk about it so far.

So, was there ever any truth to those Glenn Ordway returning to WEEI stories from the Inside Track?
— Not the Phantom

What’s the Costanza line? It’s not a lie if you believe it? There was never anything to it beyond Ordway having dinner with Phil Zachary, the Entercom Boston market manager, and some other WEEI personnel. They go way back — I believe to Glenn’s WITS days — and Zachary respects and likes him. But Mike Salk will win a Marconi before Entercom signs off on rehiring Glenn. Those stenographers over there help him keep his name in the paper, but there’s nothing more to it than that.

I find the concept of a baseball team needing an ace to be rather silly. Does it help to have Clayton Kershaw? Of course. Can you win with a bunch of solid No. 3s, and good bullpen, and a strong lineup? I don’t see why not. The idea of needing one guy who goes every five days otherwise your season is doomed seems like some flawed logic. Also, there’s this thing called in-season trades.
— Matt

I agree to some degree, Matt. The Sox lack an ace unless Rick Porcello takes another leap forward, but they should be a genuine contender given the strength and versatility of their lineup and a deep staff in general. And I do think an in-season trade may be exactly how Cherington is approaching the “need” for an ace. Where the lack of that No. 1 hurts, though, is once they get to the postseason. We just watched Madison Bumgarner carry the Giants to the championship. Lester, Josh Beckett, and Curt Schilling are three of the greatest postseason pitchers of all-time and were crucial in the Red Sox’ three titles. I do think you need that guy to win the World Series in most years. The worst-case scenario, other than missing the playoffs altogether, is having a season like ’05, when Matt Clement had to start the playoff opener and it was a mismatch from the start.

Hear this one has made it into heavy rotation down in Foxborough. One of these days Zolak is going to fall out of the booth. 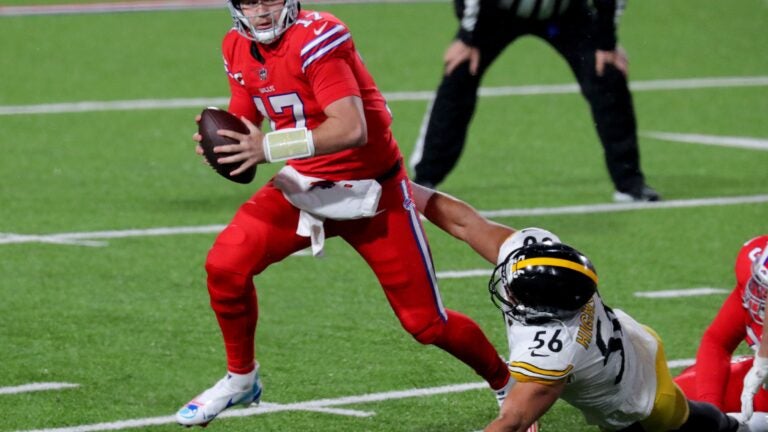 Where the Patriots fit into a crowded AFC playoff picture