PHOENIX — I’m here to report that contrary to public perception and logical thinking, Radio Row — the gauntlet of radio stations tightly set up in the basement of the Phoenix Convention Center in which product-pitching current and former players are herded in for interviews — does not smell entirely of day-old fried food.

No, it smells of day-old fried food, old football player with more than a hint of Brut cologne, and hygienically liberal radio hosts who have been stewing in their own juices for several days at four-hour increments.

Your presumed day-old fried food scent is as delightful as a Yankee Candle by comparison.
I spent 10 minutes down there Thursday afternoon, and I’m still waiting for the smell of aging onion rings to depart my nostrils.

Still, I did notice things. Such as this: To a man, 45-year-old male sportswriters can post a faster time in the 40-yard dash than anyone would expect when it’s announced that the Katy Perry press conference is upstairs in 15 minutes. The escalator suddenly turned into a northward migration of khakis and ugly golf shirts. Apparently it’s not just a teenage dream.

Five more observations from my brief and yet too-long visit.

1. What do they have in common besides sports fame? At the entrance to the Radio Row maze, NHL legend Jeremy Roenick spots Patriots Bucs and Broncos great John Lynch and gives him a bro hug. A flash of befuddlement crosses Lynch’s face before he finally recognizes Roenick. Did he not play NHL ’94?

2. Obscure jersey quest! When I cover a Patriots game and walk past all the tailgates en route to the media entrance, I’m always on the look out for the fan wearing the most random jersey I can find. (Sometimes, actually, it ends up being a John Lynch jersey. He never played a regular-season game with the Pats, but the Pro Shop sold them in training camp in 2009. Lot of you guys pissed away cash on Tebow paraphernalia too.) This place is an absolute goldmine for obscure jerseys. A few spotted during this brief stroll: Two Darren McFaddens, a Sean Taylor (RIP), a Tim Couch (dude did not appear to be wearing it ironically), a Chad Brown (Seahawks), and our someone-paid-money-for-that? winner of the day, a No. 46 Kansas City Chiefs Sylvester Morris jersey.

3. Ex-players have entourages of various sizes, not necessarily commensurate with their accomplishments. Entourage-size podium rankings from these 600 seconds:

Gold: Deion Sanders. Probably 10 people surrounding him. Not enough time to tell whether MC Hammer was somewhere in the pack.

Silver: Barry Sanders. A little heavier than he was in his way-better-than-Emmitt-Smith prime, but still elusive. Five-person entourage blocked better than ’90s Lions o-line.

Bronze: Michael Irvin. Flanked by two PR flacks, Irvin hollered “No autographs!” even though no autograph-seekers were nearby. I feel like he probably does that a lot.

4. Papa John has an equally annoying doppelganger. Papa John, that Friend of Peyton and slinger of almost food-like dough-based substances, drew a crowd in the corner while waiting for Joe Montana to be ushered in to help him make “pizzas.” Papa John looks a lot like Pro Football Talk sensationalist Mike Florio. More important, I believe this to be true: Florio makes better pie than Papa John. And Papa John is a better football writer than Florio.

5. NFL.com’s Stats Zone is pretty cool, I guess. Radio Row borders on the NFL Experience, a seemingly never-ending stretch of booths and interactive exhibits for roaming fans to … well, experience the NFL. NFL.com’s Stats Zone had a video setup where fans can record a comment to presumably be viewed by their favorite fantasy football player. I resisted the temptation to hit record and screech at Odell Beckham Jr. that I had the prescience to draft him and the stupidity to cut him right before he turned into the modern-day, turbo-charged Lynn Swann. FYI, no sign of a Get Arbitrarily Suspended By Roger Goodell booth or a Try To Find Your Helmet And Sneak Back Into The Game After Suffering A Concussion booth. Probably too realistic on both counts. 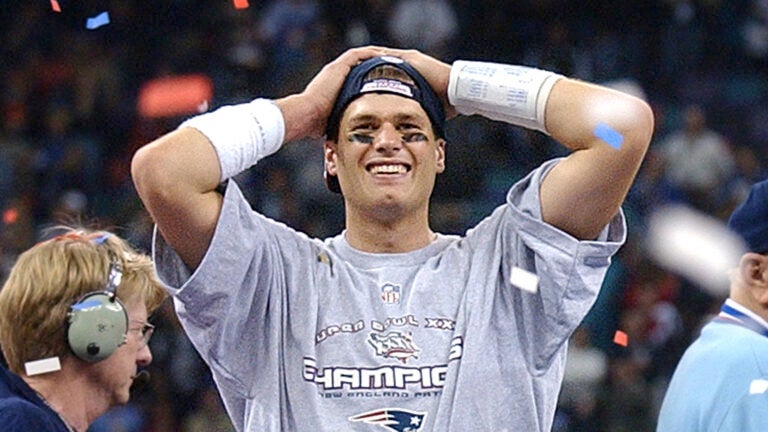