Because conciseness is a rather scarce virtue in this space, gotta appreciate the brevity of this question:

This doesn’t count as tampering, does it? I’m sure they’ll have interest, even if he’s usually among the top vote-getters for the All-Knucklehead team. It’s some combination of coincidence and concerning that a player of his talent and versatility is headed for his fourth team since 2012. But it certainly sounded like the Patriots were interested in taking him with the 23rd pick in 2009.

When that dastardly Brad Childress took him at No. 22 — then gloated about sticking it to Bill Belichick — the Patriots immediately moved down in the draft, a sign that perhaps they had just missed out on their guy.

I don’t think he ends up here, though. He hasn’t even been cut by the Jets yet and interest is high elsewhere. He’s going to get paid again. Maybe when his next new team cuts him a year or two from now we can revisit this again.

By the way, Childress is now in charge of spread game analysis and special projects for the Chiefs. What the hell kind of job is that? It sounds like code for making sure the buffet is to Andy Reid’s liking. I think we now know why the Chiefs went the entire season without getting a touchdown catch from a wide receiver.

Not sure I agree about the Celtics making the playoffs this year. They really need to hit it one more time in the lottery before they can have hope of landing a big free agent and becoming a contender. Patience. Next year is soon enough.
— dmw

Any readers want to take a first crack at answering that one before I chime in? Mark? OK, you’re up, brother:

I just wanted to point out that every day that passes is one day closer to getting those Brooklyn lottery picks for the next three years.
— Mark

Exactly, though technically it’s a swap of picks in ’17 if the Celtics so choose, with the ’16 and ’18 No. 1s already belonging to them. I agree it’s probably better for the long-term to end up in the lottery again this year — who knows, maybe some of that overdue ping-pong ball luck would finally bounce their way.

But I also have come around to agreeing that these guys deserve a reward of some sort for playing hard and sticking together as a team when there have been so many arrivals and departures in and from the locker room. I suppose it’s debatable whether drawing the Hawks in the first round is a technically a reward, but it would feel like progress to the players and especially Brad Stevens, and that matters.

I’m all for them sneaking in this year. Those Nets picks do make it easier to sacrifice a few spots in the first round this year.

Tough thing about the ’08 Celtics is that save for Pierce there was no history with any of those guys. Of the people who got a lot of run on that team, Perk and Tony Allen were really the only guys that had been around a bit. But that team was dominant. 66 wins, +10PPG scoring margin… I think if they didn’t go 7 against the Hawks they’d be held in higher regard. Also funny to think of the outcry when Jeff Green and Delonte West were traded for Ray Allen.
— Neil (DC)

There was no outcry with Wally Szczerbiak being included in the deal though, right? Those guys were officially beloved — True Celtics if you must — by the time they wiped up the parquet floor with the Lakers in Game 6.

We learned to love Kevin Garnett pretty damn fast — how many true superstars don’t care about shots and feed off of anchoring the defense? And Allen had his fans here anyway because of the UConn connection. The emergence of Perk and Rondo, the contributions from Eddie House, James Posey, Big Baby (who also came over in this trade), Leon Powe (you know how to pronounce it now, Phil), and P.J. Brown … I mean, they were established as Our Guys and worthy if distant successors to the Big Three before the confetti fell. Winning the series against the Hawks and then the Cavs the way they did proved their mettle. Only regret with that group is that they didn’t win more than one.

Does Chiarelli have to run his transactions by Neely? If so, they should both be fired.
— Brian

Of course he does. Cam’s his boss. What, do you think Chiarelli barges into Neely’s office and says, “Guess what, Sea Bass? I just traded for Loui Eriksson! And wait until you hear who I gave up!”

I understand the diehards’ frustration at the moment, but I hope Chiarelli and Claude Julien survive this season. Chiarelli has made some well-documented mistakes, but they seemed to have fixed the scouting and player development problems with the hiring of Keith Gretzky, and that has been a bigger detriment than any of the above-scale contracts that have been handed out to the likes of Chris Kelly.

I’m not a Reilly Smith fan, but that’s a reasonable deal — and one that is tradable. The Bruins have won a Cup and damn near won another in the last four years. Chiarelli and Julien have made mistakes, but they’ve been good at their jobs.

Maybe it’s me being too much of a Patriots homer, but didn’t Denver get away with only little flack for being a one-and-done after engaging New England in an arms race last offseason? DeMarcus Ware, Emmanuel Sanders, Aqib Talib, etc., and they can’t make it out of the Divisional Round. I figured we’d see MUCH more coverage about them loading up in the offseason only to falter. I really do think it’s awesome that, besides the Ware signing, the Pats matched them pound-for-pound and came out on top.
— Chris

What’s funny is that the new guys were almost entirely upgrades over their predecessors across the board, something Bill Barnwell pointed out in a recent Grantland column. Talib was better than Champ Bailey, Sanders was an upgrade on Eric Decker, Ward gave the secondary a big-hitter … and yet they slipped. And you know why they slipped? Because their quarterback’s fastball turned into a changeup. That’s why there was little criticism from the national media about the Broncos’ slip. Much of it was on Manning’s weakened shoulders, and nothing is Manning’s fault unless it’s too blatant to ignore.

Among the reasons I’m optimistic about the Sox this year is that I think most observers are not appreciating the magnitude of having healthy versions of Pedroia and Napoli. It’s become fashionable to point to the decline in Pedroia’s production, but it’s at least possible that’s entirely due to injuries. Yeah, they could still use some more pitching, but I get excited at the depth of the lineup.
— John

Completely agree, John. The lineup should be a machine, even with the large potential variances in performance from talented but unproven players like Xander Bogaerts and Rusney Castillo. Napoli played with a hand injury all year, and he apparently hadn’t slept since 1997, either. I expect a big season from him. I’m a little warier about Pedroia, but if he can get past Opening Day for once without hurting himself, I’ll believe.

Because Bird’s shot was beautiful music in its own way, that’s why. (By the way, who invited Ralph Sampson to this thing? Awkward.) 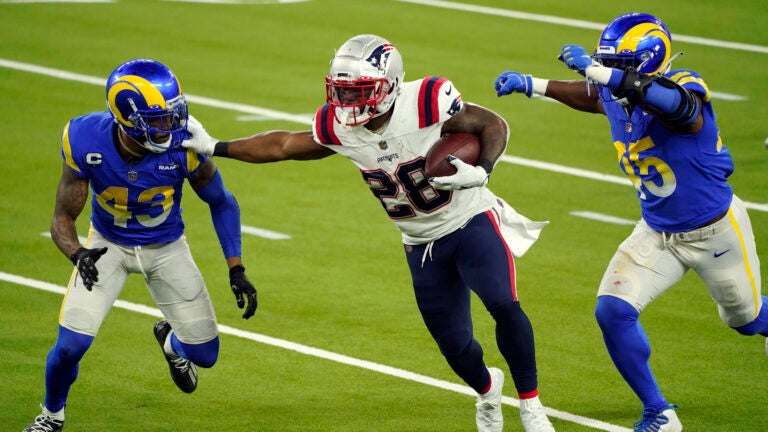