Just a single lonesome letter in the mailbox to get to today, but it presents a question worthy of elaboration on a topic desperate for resolution.

No, not Deflategate. It’s the other story line the Great and Honorable Roger Goodell lets fester while he presumably enjoys a delicious peasant-served lunch with the favored and loyal water carriers.

Call it Tampering With Darrelle, brought to you by Woody Johnson:

I know the talking heads on sports radio aren’t the most intelligent people on earth [editor’s note: You’re absolutely right, Clemens21], but how is lusting after and saying you’d like to sign a player under contract to another team (with a team option) and still playing games the same as an owner saying he wishes they had re-signed a player after he just signed with another team. Don’t remember anyone accusing Ben Cherington of tampering after saying he wished they had signed Jon Lester.
— Clemens21

Appreciate your clear-eyed summary of this situation, and I’m awarding you bonus points for the shot at sports radio. Well done.

The Cherington/Lester angle is apt because the general manager’s praise of the Chicago-bound lefty was a past tense tip of the cap for an admirable championship-winning player here who got a bleep-ton of money elsewhere. It was a thank you and a good luck, a wish-you-well for a player who deserves nothing but kudos.

It’s exactly what Robert Kraft did for Revis, and it was entirely appropriate, a graceful way to explain why the Patriots didn’t match the Jets offer while also applauding a player who had a huge role in the franchise’s fourth Super Bowl victory.

“We thought we made a very competitive offer,” Kraft said at Monday’s NFL meetings. “I speak as a fan of the New England Patriots. We wanted to keep him. We wanted him in our system. We have certain disciplines [with spending]. We had hoped it worked out. It didn’t.”

If the Jets seriously believe Kraft’s salute to a player who moved on is tampering, well, apparently they have as much familiarity with the rule book as they do with winning Super Bowls.

More likely, their ridiculous that’s-not-tamperingthis-is-tampering stance is a desperate bit of gamesmanship from a franchise trying to muddy the waters of common sense after its owner made a comically egregious mistake.

If you do not believe Jets owner and great-grandson-of-a-talcum-powder-magnate Woody Johnson tampered when he said in December that he would love to have Revis return to the Jets, then I suspect you’ve been paying attention even less than Geno Smith does in quarterback meetings.

Here is what Johnson said: “Darrelle is a great player, and if I thought I could have gotten Darrelle for [what the Patriots paid], I probably would’ve taken him … I’d love for Darrelle to come back.”

And here is the precise example the NFL cites in its tampering policy of a comment that would constitute a violation.

“He’s an excellent player, and we’d very much like to have him if he were available, but another club holds his rights.”

I mean, that is the literal definition of tampering, and Johnson’s comments about Revis were practically verbatim, just with a specific name. It was a textbook violation, and the Jets should have to pay.

They know it, too. Johnson’s desperate apology later that same day was confirmation that someone within that organization recognized that the owner made a huge mistake in verbally lusting after a player who was under contract elsewhere.

“I misspoke today when I commented on Darrelle Revis,” Johnson said. “I would never interfere in the contractual relationship of a player with another team and should not have used those words. I called Robert Kraft this afternoon to emphasize those points.”

Three months and one more Patriots championship later, the Jets signed Revis. Perhaps a direct line can’t be drawn between the tampering and the reacquisition of one of the greatest players in their history. Revis has 39 million guaranteed reasons he is back with the Jets. But the owner speaking up certainly didn’t hurt their cause.

The question isn’t whether the Jets tampered. It’s what their punishment should be. In recent years, two franchises — the Niners in 2008 and the Lions in 2011 — lost draft choices as punishment for tampering.

The Niners forfeited a fifth-round pick and had to swap third-round choices with the Bears after tampering with linebacker Lance Briggs by contacting his agent during the 2007 season.

Three years later, the Lions forfeited a seventh-round pick and had to swap fifth-round picks with the Chiefs after Detroit defensive coordinator Gunther Cunningham — formerly Kansas City’s head coach — said, “[Kansas City] keeps wanting to dump their players. I would like to be there to catch a lot of them because I know a couple of those guys.”

(Random: One of “those guys” was safety Jarrod Page, who played briefly for the Patriots.)

I don’t know why it is taking Goodell so long to drop his ball-peen hammer of justice on this — perhaps the wireless is spotty on the top floors of the ivory tower? It should be clear even to Goodell, a milquetoast man who probably believes the Peter Principle is a nod to his favorite football writer’s lofty virtues, that the Jets must be punished.

Since it’s taking him way too long to settle this, we’ll help him out. The Jets don’t have to forfeit a draft pick.

Just swap 2015 second-rounders with the Patriots and promise that Smith will remain at quarterback for the foreseeable future and its all good.

Of course, if you appreciate high-level, creative gamesmanship — and every Patriots fan should, because their team does it so effectively that the competition committee, a simpering pack of fist-shakers and bosom-clutchers, feels obligated to keep changing the rule book on them — there has to be begrudging respect for the Jets’ attempts to cloud the logical conclusion here.

Initially, I wondered why they would pull such a stunt by filing counter charges. It seemed dumb and petty and so very Jetsian. But then I remembered that they’re dealing with one of their own here, and that’s when I realized that they actually made a shrewd move.

Goodell is a former Jets public relations intern. I don’t know why that factoid makes me laugh … actually, I know exactly why it makes me laugh.

Because his approach to his current job mirrors the way the Jets and their fans perceive their own place in the universe. Their sense of entitlement and demand for respect goes well beyond any actual accomplishment. They drink from the same well of obliviousness. Symbolically, they’re all de facto public relations interns who inexplicably possess delusions that they have the wits and wisdom to be the commissioner.

Hell, no, I do not expect Goodell to get this right. Does anyone? Does he ever get anything right? He’ll be duped by the Jets’ end-around. He’ll punish them, because he loves nothing more than slamming down his ball-peen hammer of justice with authority, but the punishment will be nothing of consequence.

The truth, however, remains in plain view to those who actually have their eyes and their rulebook open. The Jets, inadvertently or not, tampered with Revis, watched him collect a ring with their rival, then they signed him.

The Patriots? They bid a gracious farewell to a player who helped them win a Super Bowl.

No wonder the Jets can’t relate.

This staple of victorious locker rooms was released in October 1977. Or eight years and 10 months after the Jets last won the Super Bowl. 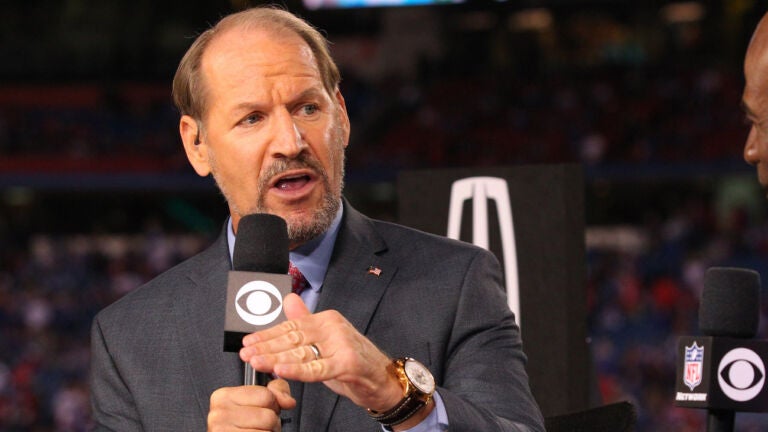