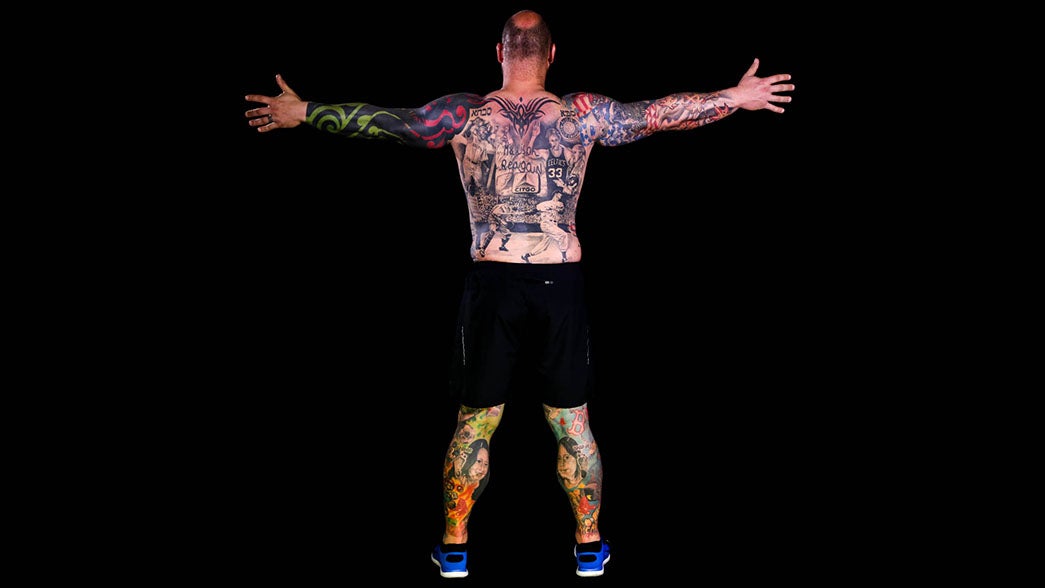 His name is Gary Gootman, and one look shows that the “thing’’ he refers to is covering himself with tattoos — many of which are of Boston sports icons.

He has an estimated 700 hours logged in the parlor chair, muraling himself with detailed portraits of Tom Brady, David Ortiz, and Red Auerbach.

He loves Boston. He was born in Brockton, he has fond memories of watching some of his sports heroes growing up, and he attends multiple Patriots games every season. But Gootman’s Patriot pride is particularly interesting, considering he has lived in Dallas for more than two decades now. 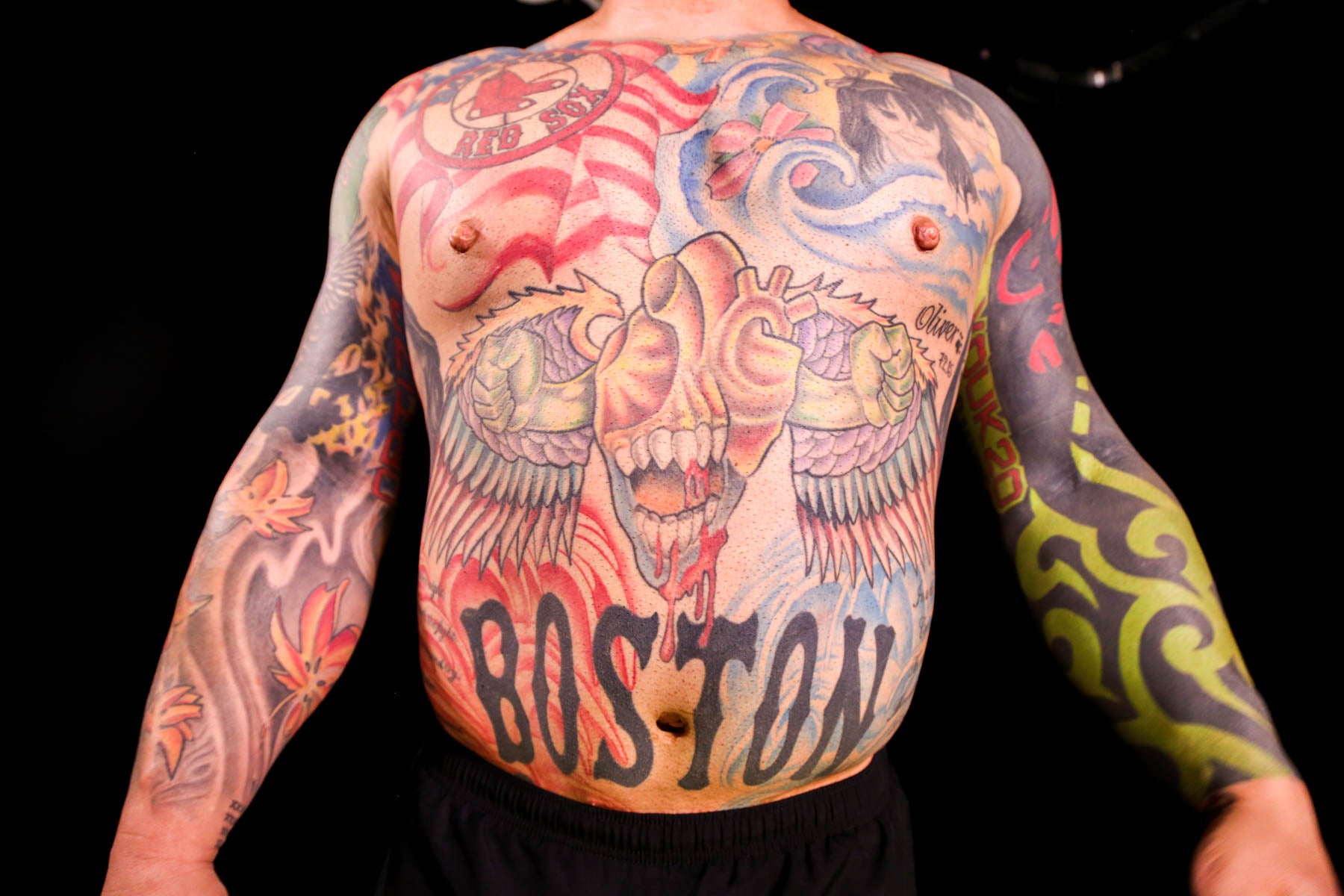 “That’s me 100 percent,’’ Gootman said. “I think it’s just from growing up here. I got to go to Red Sox games when Clemens pitched and that was a really big deal to me back then. I think also from so many people hating us so much, sometimes you just want to stick it in their face.’’

Gootman is a walking tribute to the Patriots, Celtics, and Red Sox, but most of the work on his body is fairly recent. Growing up in a Jewish household, his mother was less than pleased when he came home with his first tattoo, a tribal arm piece, at age 18. (Interpretations of the Torah say that marking one’s body is a culpable act.)

He began routinely getting inked about six or seven years ago, though, about the same time that he set out to lose weight and turn his life around.

“I used to be a lot heavier,’’ Gootman said. “I weighed over 300 pounds. Losing all that weight and exercising all the time kind of changed my confidence. I wanted to live to see my daughters grow up. It was around that time I started getting more tattoos.’’

By 2013, Gootman was hitting the gym at 4 o’clock each morning and spending about five or six hours every Tuesday getting tattoo work done by his artist, Daryl Distler. It built him into the inked-up muscleman that he is today, but don’t let his intimidating exterior steer you wrong–every piece of artwork on his body comes from a place in his heart, especially those tattoos that honor his family. 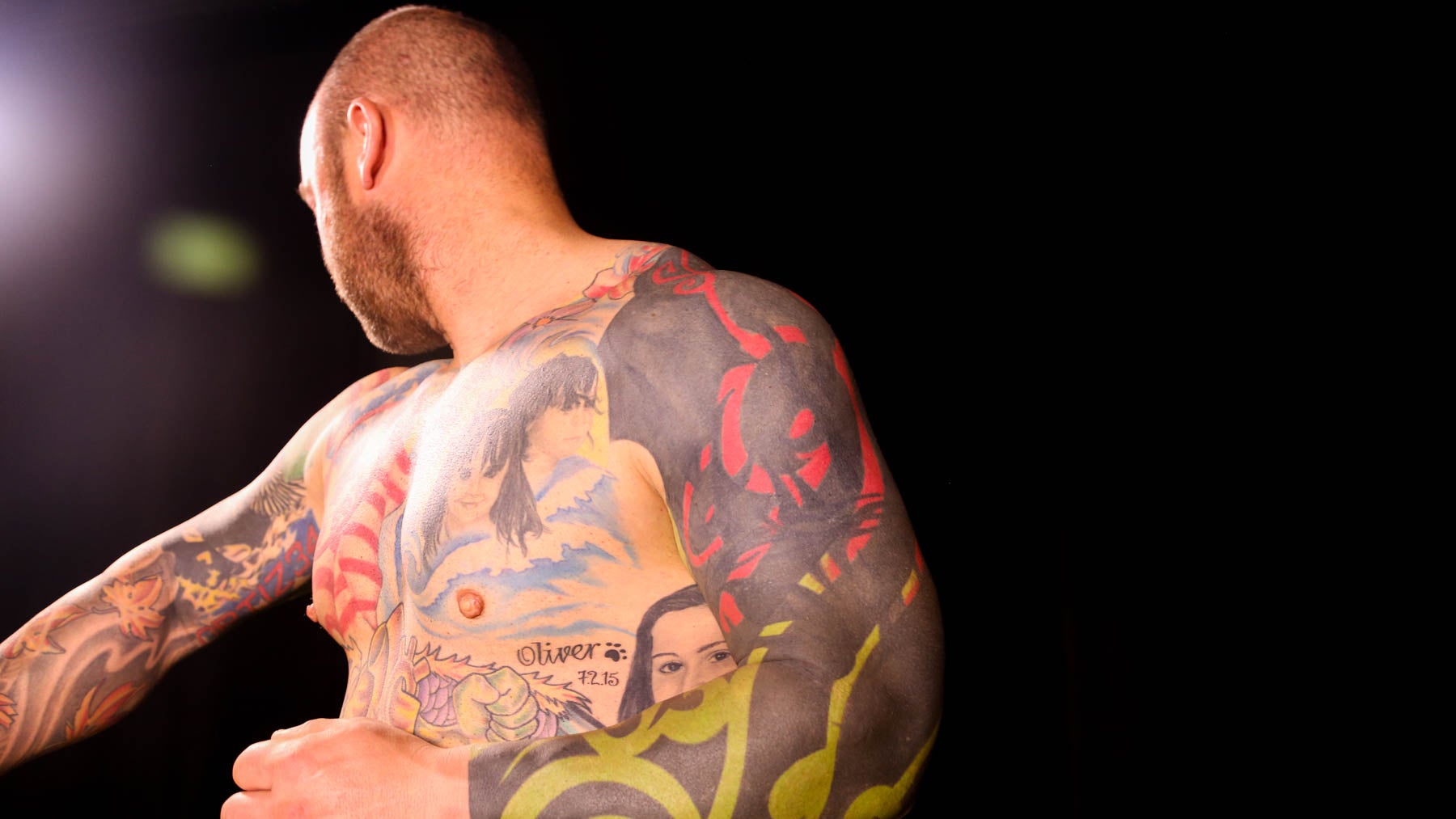 Just as he loves his city of origin, Gootman’s love for his his wife and children is scattered about his body. Gootman’s passion for Boston sports has proven infectious, as he’s converted his wife and raised both of his daughters to share in his obsession.

“My older daughter is in love with Brady,’’ Gootman said. “My younger daughter loves Gronk.’’

To honor his late grandparents, the words “grandmother’’ and “grandfather’’ written in Hebrew are spelled proudly on the backs of his shoulders. Photos of his wife, Melanie (dressed in Red Sox swag for one of them), claim large pieces of real estate, and the portraits and names of his daughters occupy several spots, too. He’s even paid tribute to several of his dogs on different body parts, including a picture of his late Boxer, Cousy, which he says is his favorite tattoo.

At this point, Gootman has just about run out of room to expand upon his collection of tattoos. In spaces that aren’t already dedicated to sports idols and family members, he inserts random bits of his personality: video game characters he enjoyed growing up, colorful leaves to show his softer side, even a portrait of Zach Galifianakis from The Hangover on his knee that he got on a whim. Occasionally, when he gets the itch, he’ll still go in for touch-ups, but he’s content with his ode to the city and the people he loves.

“Living in Texas, I want to represent Boston,’’ Gootman said. “That’s where I’m from, and this is my way of showing it: putting it on my body.’’

Gootman, with the rest of his native New England, will be watching with excitement as the Patriots embark upon another playoff run. And if (knock on wood), the Pats add another ring to the collection, Gootman’s greatest challenge might simply be finding space to put another picture to pay tribute.

“I’ve saved my butt cheeks, and that’s about all I have left.’’