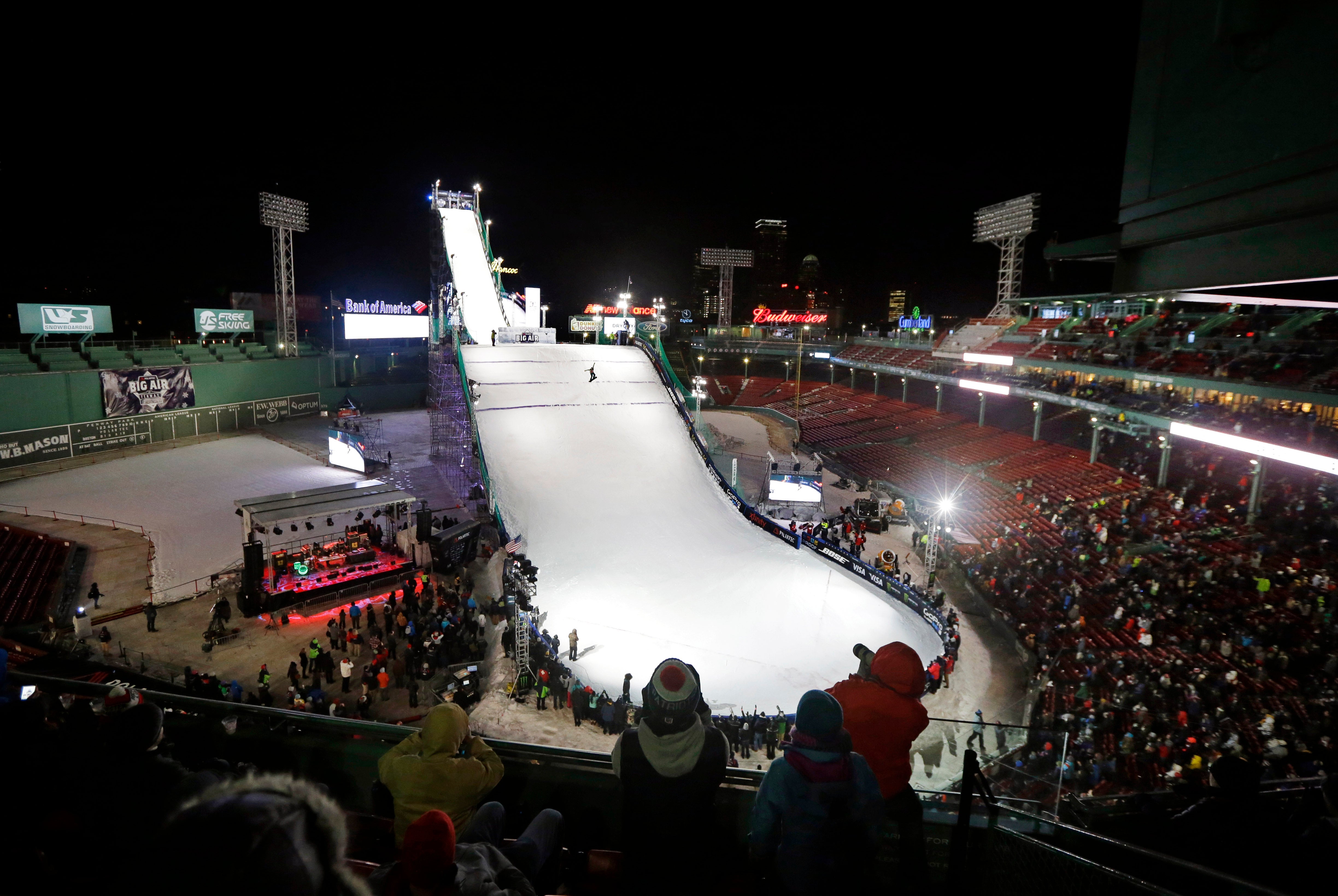 I’m eight years old. And my ballpark is empty.

OK, in reality, there are people here. A few hundred, at least.

Maybe a thousand or so indifferent folks were on hand to witness the humungous, impressive, slope that has been created from the spirit of Dwayne Hosey to Tony Pena, from dead-center field at the old yard all the way to a home plate area that saw more effective slides during this snowboarding event than the entirety of the 2015 last-place season for the Red Sox.

If you’ve paid attention at all over the last three weeks, you’ve seen images of the 140-foot ski jump that was built at Fenway Park for the first annual Polartec Big Air event. The structure is some 740,000 pounds, and that’s excluding any Pablo Sandoval jokes.

So, yes, this was a strange scene

The Fens, that very historic stickler of a sports venue, has been transferred into an X Games sort of playground, a welcome arena to flip, twist, and turn, the very antithesis of everything that Hanley Ramirez is about.

Then, the crowd grew.

And what a crowd it became.

Look, for a guy that feels deeply connected to the skiing and riding community — despite being a proponent of two planks and deep powder, as opposed to manufactured steeps and twists — the Big Air event that took place at Fenway Thursday (and continues Friday) was indeed a sight to be seen.

But it’s as foreign to me as it is to the old ball yard.

And yet, the fervent crowd, ether stoked by the scene, or the libations to take the chill away, was something unexpected.

Maybe they got the same surprise from watching the athletes.

As the stakes grew so did the audience, even though I couldn’t escape from the matter that it was still but a square peg in a round hole kind of event.

I’ve seen my favorite band (Phish) play here. I witnessed Dave Roberts’ steal. I was among the dozens of fans who came within a foot of tapping Yaz’ hand as he rounded the circumference of the ballpark on the day named after him in 1983.

Even though this venue has seen a variety of events that aren’t based in rawhide prior to this, the sight of watching snowboarders hurdle down from the level of the light towers was something foreign. I mean, there was a freaking Olympic-sized venue of snow erected at Fenway Park.

Oh, you also knew, for sure, that you would be able to purchase official US Ski team gear at venues in the bowels normally revered for David Ortiz jerseys, and soon to be the source of Tessie the Mascot paraphenilia come April.

The Patriots have played here. Bruce Springsteen and the Police have graced this yard. Liverpool soccer showed up for some apparent reason.

But this? This was the oddest event that Fenway Park has ever hosted.

But at the same, it was a hit.

“I think this is amazing,’’ said Brandon McDermott of Methuen. “It’s one of of a kind. How many people can say they’ve been in Fenway in the middle of February?’’

Normally, the only photo ops in this ballpark this month come after a snowstorm, the annual shot of a foot of powder that only serves as a precursor to spring, when the Red Sox will take their rightful place back on the green come April. But this? As weird as it seemed. As out of place as these alpinists looked in the shadow of The Wall?

“I’m not a big skier or snowboarder but it’s still fun to watch, Kylie Mainerd said. “It’s just an event. Something to do on a Thursday night.’’

At 9:54 p.m, the Fenway Park folks felt it was time to play “Sweet Caroline,’’ which got the natural “So Good!’’ response from the crowd on hand.

It was also a reminder of where we were, despite the foreign atmosphere.

“It’s a beautiful event,’’ McDermott said. “In the middle of February.’’

Pitchers and catchers can wait.

At least one more day, right?