It’s not because of some underdog status — Las Vegas, which boasts league MVP A’ja Wilson as well as sixth woman of the year Dearica Hamby, has one of the best records in the league — but because she wasn’t supposed to play at all.

Swords, 31, was a standout at Lincoln-Sudbury before starring at Boston College. But she retired from playing in February, and remained with the team as a marketing specialist.

Back then, the Aces “were really starting to gear up for our season,” Swords explained. But within weeks the COVID-19 outbreak changed everything and the WNBA, like virtually every sports league around the world, came to halt.

That was concerning for Swords.

“I didn’t have a lot to do if we didn’t know when games would be played,” she said.

After weeks of uncertainty, a plan began to come together. Like several other leagues, the WNBA would use a bubble system in an attempt to keep players safe. They were set to begin in mid-July. But there was a problem: not all of the Aces’ players would be available.

South Korean center Ji-Su Park opted out of the season to train in her home country. Suddenly, Las Vegas needed help in the frontcourt. Luckily, the solution was already in the front office.

“I got a call in I think it was early May, shortly after Ji-Su announced that she wasn’t going to be coming back, that meant that our roster was going to be short,” said Swords. “So our general manager, Dan Padover, gave me a call. He had known that I had made this decision to retire, but he asked if I was interested in rejoining the team.”

For Swords, Boston College’s No. 2 all-time scorer and an eight-year WNBA veteran, it was too good of an opportunity to pass up.

“I thought about it for a couple days, and it seemed like a really exciting opportunity to jump back into it,” she recalled.

And it’s an opportunity that’s given her a chance to win a championship ring when the Aces tip off against the Seattle Storm in a best-of-five series that begins Friday.

But instantly, she was faced with the issue of getting back into basketball-ready shape.

“I had spent the last couple of months working out like anyone else,” Swords admitted. “I’d go for a run, I would do my own lifting, but I hadn’t been training like a post player, and working on the things I needed to so I could play defense against these really great post players. So I just had to switch gears immediately.”

She had to shift her mentality. She was done with her playing days — and training for a local road race — when she got the offer to return. She began working on a regimen that would prepare her to contribute to a championship-caliber team.

Months later, and from the vantage point of preparing to play in the finals, Swords is simply happy to add such an experience onto what was already a memorable basketball career.

As a high school senior, she was named the Gatorade Massachusetts player of the year and led Lincoln-Sudbury to the Division 2 state title in 2007. Playing for Boston College, she set program records in games played and rebounds.

For an athlete who has also toured the world — she’s played professionally in six countries — Swords has a wider perspective on her comeback.

“I’m just happy to be along for the journey,” she said. “It’s really just a tribute to the rest of the team.”

Life in the WNBA bubble has been a unique experience, even for someone like Swords.

“You can’t really compare it to anything, because even when we were quarantining at home you could still make your trip to the grocery store, do what you needed to do,” Swords noted.

Like many players, she had her reservations when the league first entered its bubble in Bradenton, Fla., back in July as COVID-19 cases spiked around the rest of the state.

“I think to even get on a plane and come down here, there were elements of that that were pretty nerve-wracking,” said Swords.

But she credits the league for “doing what they needed to do and having the testing and everything in place that has kept us safe.”

In terms of her outlook on the court, Swords has developed a strong relationship with her coach, a man her Massachusetts family was initially skeptical of: Former Detroit Piston Bill Laimbeer, who became infamous in New England for his battles against the Celtics in the 1980s.

“My whole family are Celtics fans,” said Swords. “I first was going to play for Bill Laimbeer when I was signing to play for New York in 2015. I do remember that our family was a little wary, because everyone remembers the days of Bill playing for the Pistons against the Celtics.

“But he’s an incredible coach and a great teacher,” Swords added, “and my experience playing for him has definitely converted my family into Bill Laimbeer fans.”

Looking ahead to the matchup with Seattle, who — like Las Vegas — dominated the league’s season inside the bubble, Swords has the perspective of someone who wasn’t supposed to be here at all.

“It’s going to be really competitive,” she explained. “They’ve been there before, they won in 2018, and so this is an experienced team and they have experience playing together. We absolutely need to prepare the right way and be ready to go. But it should be a fun series. I’m looking forward to the challenge.” 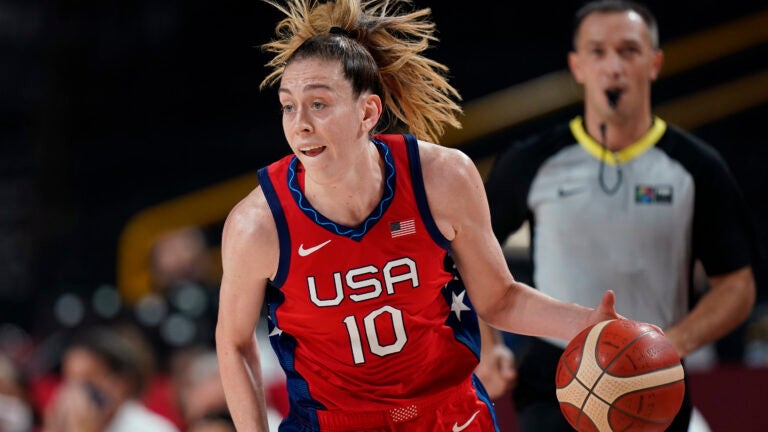