The Boston Pride had everything working in its favor last winter: dominating the National Women’s Hockey League, on track for the first flawless season in league history, the overwhelming favorite to capture the championship.

The Minnesota Whitecaps spoiled the perfection, handing Boston (23-1-0) its only loss. The COVID-19 pandemic canceled the season with one game left – the Isobel Cup showdown between those two teams, at Warrior Arena in Brighton.

Now, the Pride embark on a redemption tour that could finish on an even bigger stage. Saturday in snowy, frigid Lake Placid, N.Y., the NWHL begins its two-week sprint to the Isobel Cup.

At Herb Brooks Arena, the Pride will play five regular-season games, against the other five teams in the league, followed by a round-robin for seeding in the four-team semifinal. Boston, which added eight new players to a club that outscored opponents 120-43 is widely considered the favorite.

“The energy in our locker room to win, we had it last year,” forward Christina Putigna said. “It’s flowing into this season as well. We’re all pumped to play. We’ve been waiting a really long time for a game day. We’re ready to go.”

The Pride faces Minnesota first (4 p.m. Saturday), the team’s first game since March 8. They have been practicing for the last four months, taking COVID-19 tests, and training for this moment.

Make no mistake, this will be a moment. The semifinal and final will be broadcast on NBC Sports Network, bringing a new level of exposure to the league. All other games are streaming on Twitch.com/NWHL.

Pride president Hayley Moore said she “got chills” hearing a reporter ask a question about the national broadcast.

“It’s so meaningful to us, as people who have grown in this game since we were young girls, to think about the little girls at home that get to watch these players on TV,” Moore said. “It’s so moving. It’s so motivating.”

Even more incentive: after the bubble, Moore is leaving to become vice president of hockey operations for the AHL.

“As if we needed more motivation,” said Moore, GM of the Pride during their inaugural season in 2015, who has also worked in the league office.

The Olympic Regional Development Authority, which manages the facilities used in the 1980 Olympics, is overseeing a bubble of about 170 people, including players, coaches, management, trainers, and staff. Teams have 20-player rosters. COVID testing will be provided by Yale Pathology Labs. There is an all-female officiating crew.

The Pride planned to practice shortly after arriving Friday afternoon. If they make it to the Isobel Cup Final, they will have played nine games in 14 days.

The schedule includes room for little other than hockey games and their recovery — no ski excursions, no team toboggan rides. Even the practice days are packed: each team has double sessions scheduled on Monday, Friday, Jan. 29, and Monday, Feb. 1.

“I don’t care what level hockey you’re playing, that’s a ton of hockey,” said Pride coach Paul Mara, a Belmont product and former Bruins defenseman. “Nothing’s really going to prepare you for that amount of hockey. The good thing is we have such a deep lineup. We can play four lines, we can play seven defensemen, we have two great goalies.”

The team ranges from ages 22 (defender Paige Capistran) to 30 (top center, captain, and reigning league MVP Jillian Dempsey). They are hard-working women with day jobs, who will be conducting meetings and Zoom calls from their hotel rooms in Lake Placid, while shuttling between ice baths and the gym.

“We are just beyond excited,” said Dempsey, who will remotely teach her fifth-grade students at Winthrop’s Arthur T. Cummings Elementary. “It’s going to be competitive and intense and anyone who tunes in will not be disappointed.”

Like their Warrior Ice Arena pals, the Bruins, the Pride might have the best No. 1 line in the league: Dempsey, the Harvard grad who led the league in points (40) and assists (23), Northeastern’s McKenna Brand (19 goals) and Putigna, who played at Providence. They also might have the best goaltender in Lovisa Selander, a Swede who played at RPI. She had best-in-class numbers: 17 wins, a .941 save percentage and 1.71 goals against average.

The Pride also have the returning NWHL Defender of the Year, Boston University’s Kaleigh Fratkin, who has arguably the hardest shot in the league and loves to use it. Known for her toughness, she scored a career-high 23 points last year. Among the new faces: No. 1 overall pick Sammy Davis, the former Boston University standout. Mara called her a “fantastic skater” with high energy and skill.

“Everyone for some reason has us as the favorites going in, and that’s great,” Mara said. “Everyone can think what they want. We still have to show up and play. No one’s going to hand us an Isobel Cup.”

Certainly not Minnesota, whose star, Allie Thunstrom, scored the winner with 50 seconds left in that Jan. 25 game in St. Paul, Minn. Her goal, seven seconds after Dempsey tied it, gave the Whitecaps a 4-3 win. The Pride don’t talk about how they won by a pair of goals in a rematch the following day.

“We have a chip on our shoulder,” Fratkin said.

Thunstrom, who might be the fastest skater in the league, returns after scoring 24 goals in 24 games. Minnesota also features one of the best netminders, Amanda Leveille (.935, 2.08, three shutouts last season), and last year’s highest-scoring defender, Amanda Boulier (6-21–27).

Other teams don’t look as strong, but power winger Madison Packer (12-21–34 in 24 games) is a reason to respect the Metropolitan Riveters.

The Buffalo Beauts were hurt by the work-related opt-outs of leading scorer Taylor Accursi – she is a police officer in Ontario – and captain Corinne Buie, but offensive blue-liner Marie-Jo Pelletier, who stands 4 feet, 11 inches, is fun to watch. The Connecticut Whale has the toughest hill to climb, but sharpshooting center Emma Vlasic can score on anyone.

The expansion Toronto Six hope Emily Fluke, who finished eighth in league scoring last year as a member of the Pride’s supporting cast, can assume a leading role. The Six also has the steady hand of Digit Murphy, who became the winningest coach in NCAA women’s history during her time at Brown (1989-2011).

On Saturday, the curtain rises on a new stage for professional women’s hockey.

“We can’t wait to put in the work and put on a show,” Moore said, “and hopefully create some new and everlasting fans in the process.” 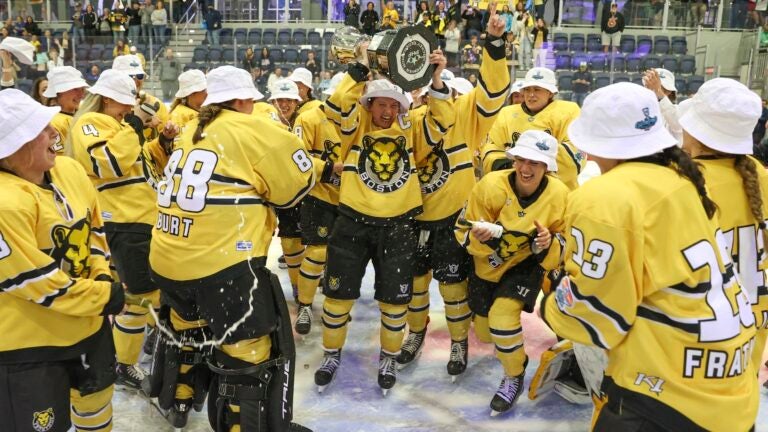