LONDON – To the fans, the FA Cup final at Wembley Stadium is an all-important soccer match. It’s also a science experiment with far-reaching implications about how to reopen society as the pandemic loosens its grip in some places.

On Saturday afternoon, the British government was watching scientists watching fans watching Chelsea and Leicester City play in the final of the oldest national soccer tournament in the world. Prince William, the president of the English Football Association, was watching at the stadium in northwest London, too.

The event in Wembley is the last and largest of a series of trials in Britain designed to inform how to resume large-scale gatherings as coronavirus restrictions are lifted.

The trials haven’t involved vaccine passports, as Prime Minister Boris Johnson initially suggested they would. But among other things, they are assessing people’s willingness to provide documentation that they are virus-free.

The 21,000 fans at Wembley were required to present evidence of a negative lateral flow test from the previous 48 hours to pass through the turnstiles. These are the cheap and relatively easy-to-use kits that require a swab of the throat and nose. In this experiment, fans must go to a pharmacy or National Health Service testing center to be checked.

In the Wembley experiment, the fans are also being encouraged to take a more precise PCR test at home before and after the game to gauge whether the less trustworthy lateral flow method is sufficient for preventing outbreaks.

“I feel like we are sorta being tested like lab rats,” said Alfie Collins-Smith, an 18-year-old student and Chelsea fan.

But he quickly added that he willingly signed on. “I’d do many, many tests, even quarantine, to go to this match. It’s the first live game I’ve gone to in 14 months,” he said.

As people began to file into the stadium, several fans let off blue flares and sang songs, some with beer cans raised high. The crowd appeared more worried about the rain clouds than the coronavirus.”

I’m looking at Wembley Stadium and am so looking forward to actually seeing people in the stands watching real football,” said David Parker, 47, a real estate agent. He took his coronavirus tests and said he’d happily submit to wearing masks or producing a vaccine passport going forward.Asked about the idea that fans stop singing or chanting in the stadium, he replied: “That’s not going to happen.”

“If we go to stadiums we will sing and chant. There’s no point going in to be quiet.”

Britain is slowly emerging from its third national lockdown and has announced a step-by-step plan to ease restrictions.

It’s a start. But hardly a snap back in time to heaving sports stadiums or sweaty nightclubs. At the FA Cup final in 2019, more than 85,000 fans packed into Wembley.

And as long as capacity restrictions are in place, certain events aren’t viable. The bigger musicals in London’s West End, for instance, need to sell about 80% to 85% of tickets to break even.

The British government is hoping that its Events Research Program can help guide a fuller reopening. Johnson has set June 21 as the target date to lift all restrictions, though on Friday he warned that it could be pushed back because of the risk posed by the coronavirus variant first identified in India.

Johnson has repeatedly touted testing as a way out of the pandemic. Last fall, he unveiled “Operation Moonshot,” a plan to test 10 million Brits every single day. Although that didn’t happen, officials are still looking for a new way forward, which could include testing before large events, vaccine passports or other measures entirely.

Some of the experimental events, including a business conference and two raves at a nightclub in Liverpool, dropped social distancing requirements and allowed participants to go maskless. Fans at Wembley were still being urged to stay three feet apart.

In that sense, it was like a Major League Baseball game – if baseball fans were required to get tested and researchers were monitoring their behavior. Cameras were recording footage and researchers were dispatched to take notes. Are people sharing food and drinks? What does the flow of the crowd look like?

Theresa Marteau, a behavioral scientist at Cambridge University who is overseeing the pilot studies, was an author on a recent academic paper that discussed creating new norms at events: Perhaps fans could stamp their feet instead of cheer, or clap instead of sing.

“While it is a basic norm of many sports crowds that people express passionate support for their team, and without that the whole activity has little meaning . . . it may be possible to develop new and distinctive ways of expressing that passion (stamping, clapping, etc) that are of lower risk than shouting or singing,” the authors wrote.

Many scientists approve of the experiment, but they caution against reading too much into the results.

Using the lateral flow tests, which aren’t foolproof, makes sense for large events as the lockdown eases, said Adam Finn, a professor of pediatrics at the University of Bristol and a member of the Britain’s Joint Committee on Vaccination and Immunization.

“You’re not aiming for perfection. What you’re trying to do is ‘re-risk’ the event. I’m in favor of giving it a try,” Finn said.

“Context is hugely important,” said Martin McKee, a professor of European public health at the London School of Hygiene and Tropical Medicine. “You can’t necessarily say you can do the same thing safely in another place where the prevalence is higher.”

With a brisk vaccination program and after a rigid lockdown, Britain has a caseload that is even lower than that in the United States, averaging a little over three new daily cases per 100,000 people.

McKee also said that while this experiment will include supervised testing, this is labor intensive and will require substantial resources. Otherwise, the system could be open to fraud.

“It would be wide open to abuse if testing was unsupervised,” he said. “You could test all your family until you get a test that comes up negative and bring that in.”

He said that, at the moment, there were still “big question marks” about whether Britain could reopen to large-scale events in the summer, given the threats posed by variants of concern.

Perhaps that’s why some fans at Wembley were keen to savor the moment.

“It’s something I’ve been waiting a long time for,” said Prem Patel, 24, who hasn’t seen a live soccer match in more than a year. Speaking before kickoff, he said he was excited to see old friends, cheer on his team and “do my bit for research.” 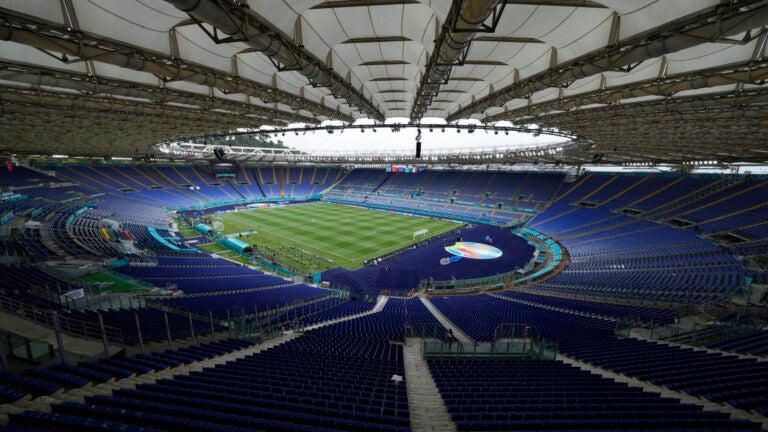