Boeing has recommended that airlines ground all 777s with the type of engine that suffered a catastrophic failure over Denver this weekend, as U.S. regulators ordered United Airlines to step up inspections of those planes.

Several airlines, including United, said they were temporarily removing the aircraft from service after one of the American carrier’s planes made an emergency landing at Denver International Airport Saturday because its right engine blew apart just after takeoff. Pieces of the casing of the engine, a Pratt & Whitney PW4000, rained down on suburban neighborhoods. None of the 231 passengers or 10 crew on board were hurt, and the plane landed safely, authorities said.

U.S. Federal Aviation Administration Administrator Steve Dickson said in a statement Sunday that based on an initial review of safety data, inspectors “concluded that the inspection interval should be stepped up for the hollow fan blades that are unique to this model of engine, used solely on Boeing 777 airplanes.”

Dickson said that would likely mean some planes would be grounded — and Boeing said they should be until the FAA sets up an inspection regime. Japan ordered the planes out of service, according to the financial newspaper Nikkei, while saying that an engine in the same family suffered trouble in December. 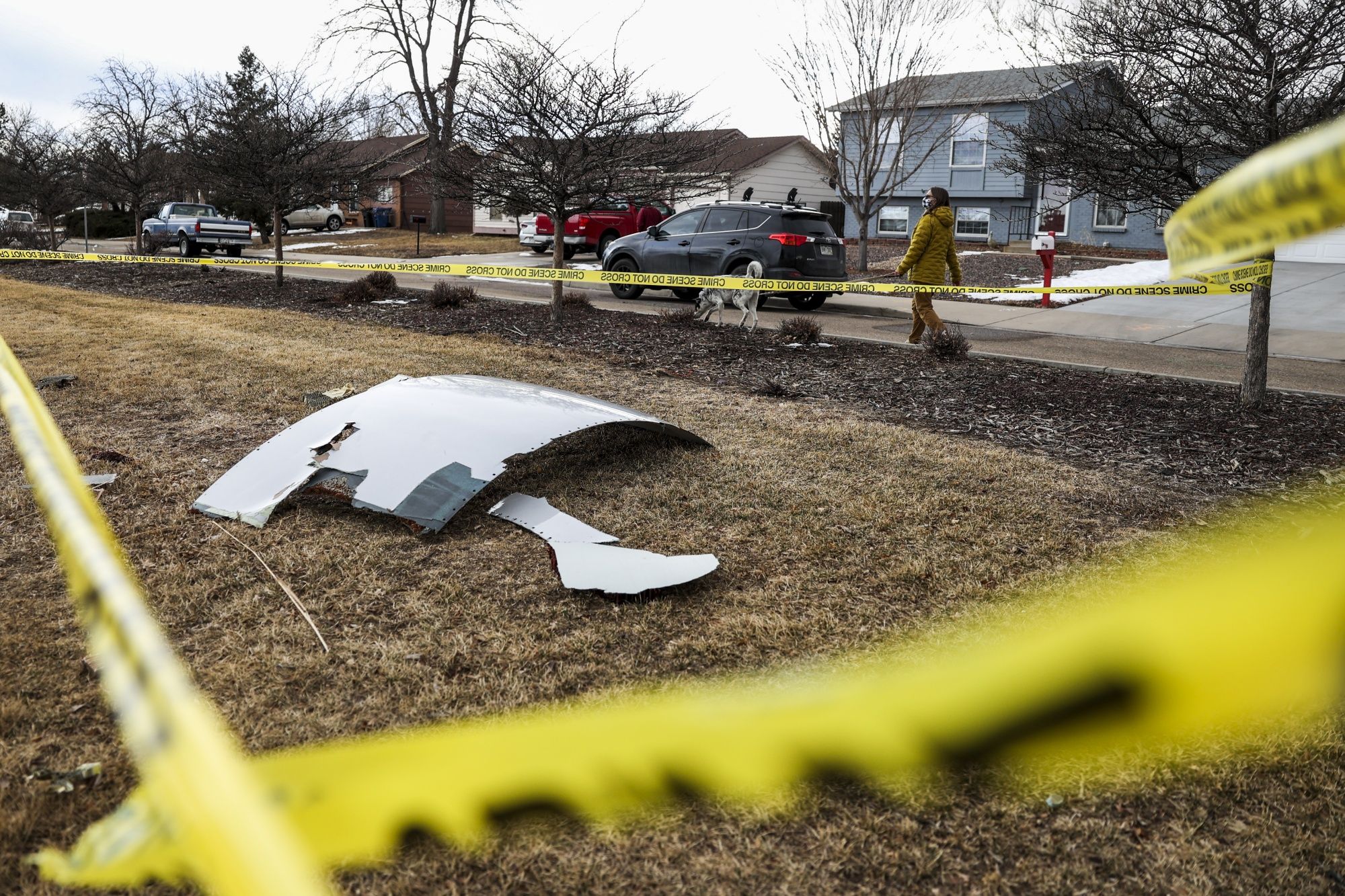 Pieces of an airplane engine from Flight 328 scattered in a Colorado neighborhood on Feb. 20.

United is the only U.S. airline with the engine in its fleet, according to the FAA, and it had 24 of the planes in service. Two Japanese airlines have another 32 that are being pulled while Asiana Airlines grounded nine, seven of which were in service, until Boeing establishes a plan to fix the problems. Korean Air said it was discussing whether to ground 16 aircraft, six of which are in service.

“We are working with these regulators as they take actions while these planes are on the ground and further inspections are conducted by Pratt & Whitney,” Boeing said in a statement issued Sunday, referring to American and Japanese regulators.

The engine maker said it was sending a team to work with investigators.

The emergency landing this past weekend is the latest trouble for Boeing, which saw its 737 Max planes grounded for more than a year after two deadly crashes in 2019. The planes began returning to the skies late last year — a huge boost for the aircraft maker, which lost billions during the Max grounding because it has been unable to deliver new planes to customers. 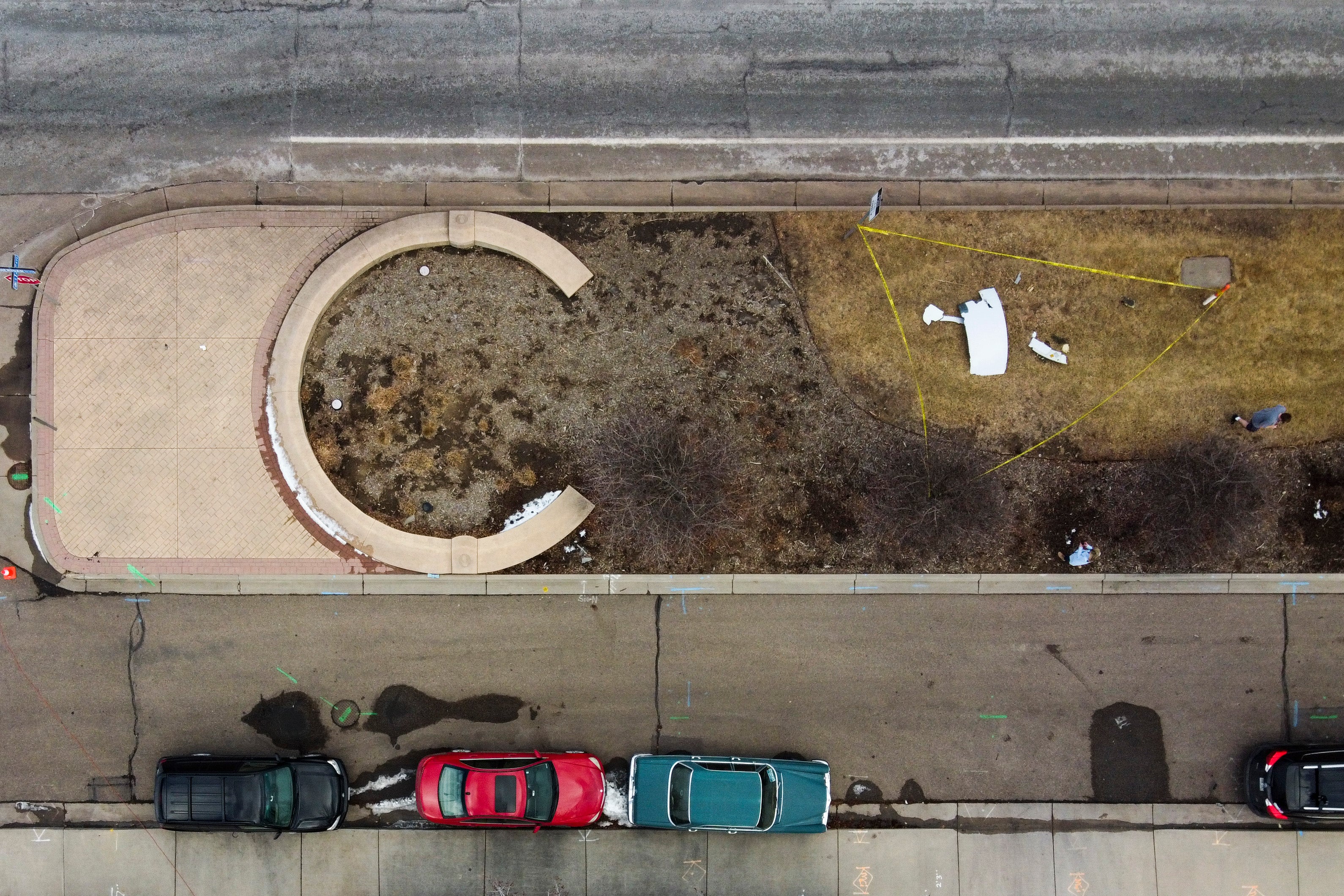 In this aerial view from a drone, a piece of an airplane engine that fell from Flight 328 (top right) sits in the median of Sheridan Boulevard on February 20, 2021 in Broomfield, Colorado.

Passengers, who were heading to Honolulu, said they feared the plane would crash after an explosion and flash of light, while people on the ground saw huge chunks of the aircraft pour down, just missing one home and crushing a truck. The explosion, visible from the ground, left a trail of black smoke in the sky.

The U.S. National Transportation Safety Board said that two of the engine’s fan blades were fractured and the remainder of the fan blades “exhibited damage.” But it cautioned that it was too early to draw conclusions about what happened.

United says it will work closely with the FAA and the NTSB “to determine any additional steps that are needed to ensure these aircraft meet our rigorous safety standards and can return to service.”

The NTSB said the cockpit voice recorder and flight data recorder were transported to its lab in Washington so the data can be analyzed. NTSB investigations can take up to a year or longer, although in major cases the agency generally releases some investigative material midway through the process.

Japan’s Ministry of Land, Infrastructure, Transport and Tourism said an engine in the PW4000 family suffered trouble on a Japan Airlines 777 flying to Tokyo from Naha on Dec. 4. The airline has said the plane had engine trouble after takeoff and returned to Naha. An inspection showed damage to the engine case and missing fan blades, according to the airline. Stricter inspections were ordered in response.

Japan Airlines and All Nippon Airways will stop operating a combined 32 planes with that engine, Nikkei reported.