Fall foliage season in Boston may be late this year, according to Jim Salge, foliage expert for Yankee magazine.

The publication released its first fall foliage forecast last week, with Salge predicting that this year’s foliage will be on time in northern New England, but trending toward late in southern New England due to extreme drought conditions.

“I’m really worried about Boston proper and the Blue Hills and the areas where it has just gotten so dry,” Salge said. “It’s extremely anomalously dry in those areas.”

Drought can make for a brief, but very bright foliage display, Salge noted.

“A lot of reds are dominant in drought years,” he said.

Salge warned leaf peepers about “the backyard effect,” a term commonly used in the ski industry when snow is lacking in the cities and urban centers, so people forget how great the skiing can be in the mountains.

Similarly, if foliage is lacking in the city, don’t assume it’s not spectacular in the mountains, he said. Traveling may be necessary this year to witness nature’s best show, he said.

Northern Maine and western Vermont are safe bets for great foliage, he said.

The leaves will begin to change in late September in the northern White Mountains, northern Green Mountains, and the mountains of western Maine, Salge said.

“Then the big three-day weekend is a great weekend always across the northern New England states and then down into the Berkshires,” he said.

“I’d say, in Rhode Island and parts of Boston, we could be seeing the brief, bright punch into November, early November, this year, unless we get some cold air,” he said.

Folks can follow Yankee magazine’s peak foliage map as they plan their fall activities, he said. 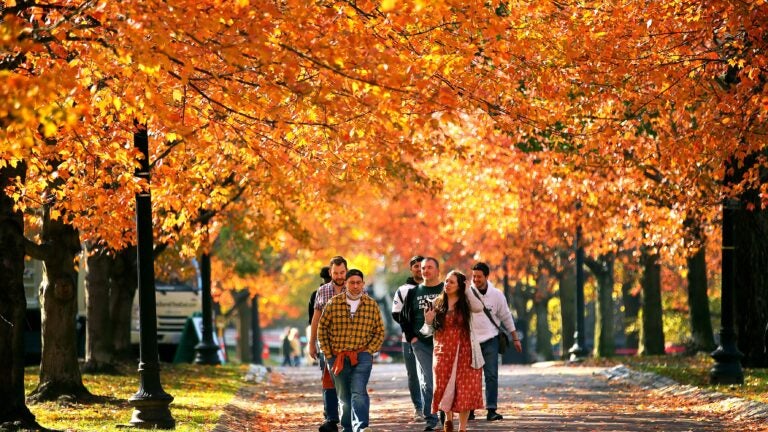